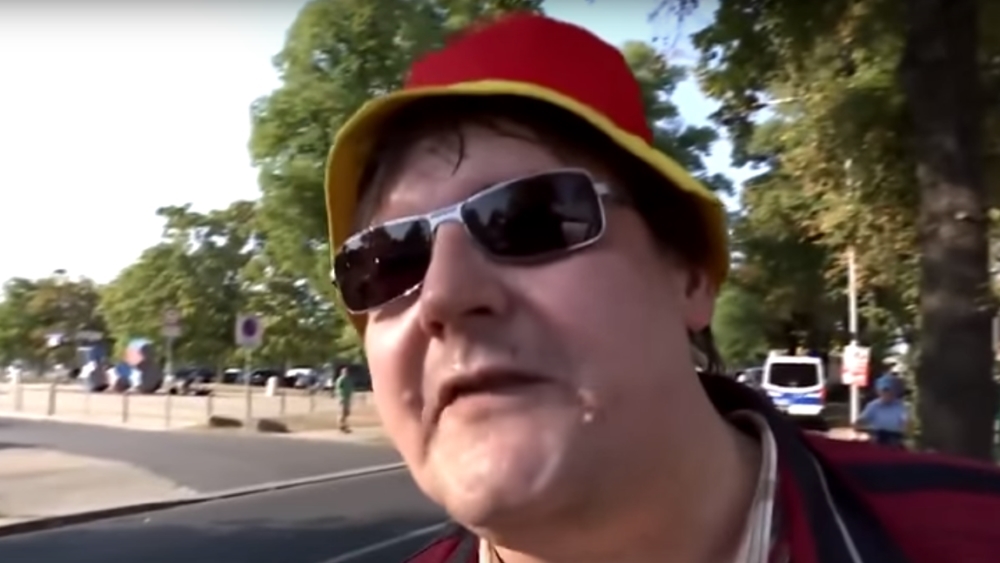 Last week, a protest against Chancellor Angela Merkel was staged in Dresden, the capital of Saxony. During that demonstration organized by the radical right-wing Pegida movement (Patriotic Europeans Against the Islamisation of the West), a TV team for the prominent ZDF magazine ‘Frontal 21’ worked on site, by filming protesters walking by. ZDF, the ‘Zweites Deutsches Fernsehen’ is a channel regulated by public law.

One of the relatively few protesters, a fat man wearing a hat with the colors of the German flag, accused the TV team of being part of what Pegida followers calls “Lügenpresse” (“lying press”), by shouting that word, repeating it over and over, while coming closer to the camera. Pegida followers love that word because, from their point of view, it seems to explain lots of things most of them do not understand. “They are all lying” is a popular explanation within Pegida.

As a video of the events available on Youtube shows, that man, Maik G., then walked up to the team and accused it of an illegal act, because it had filmed his face. He kept on repeating that accusation as well and ordered the TV team to approach the police with him.

Seconds later, three police officers checked the TV team, telling the editor he was now part of a “police measure”, but failing to tell him why he was being kept from working, in spite of his questions. The team was prevented from filming for 45 minutes.

“This occurrence is something police officers in a banana republic ruled by a dictator would be promoted for”, an observer told Publication79, “but which should not happen in a democratic country like Germany.”

On top of all of the above, it turned out the gentleman with that large belly and small Germany hat who accused the TV team works for the State Office of Criminal Investigations in Saxony. This makes the incident even more embarrassing than it would have been without this aspect.

Now high-ranking politicians, including Chancellor Angela Merkel, felt the need to comment. The government coalition in Saxony, consisting of Angela Merkel’s conservative CDU and the Social Democrats, is alarmed too.

In front of the home affairs select committee of Saxony’s parliament, the province’s Interior Minister Roland Wöller was being grilled for two hours on Thursday. All he told the press is that he was interested in clarifying the event quickly. Just a few days earlier, the Minister-President (governor) of Saxony, Michael Kretschmer, had been criticized harshly for defending the police officer’s behavior.

During a visit in Tbilisi, Chancellor Angela Merkel said she stood behind the freedom of the press.

Kretschmer’s coalition partner and deputy Martin Dulig, a Social Democrat, stated radical right-wing tendencies in Saxony had been downplayed for too long. He said the CDU was partially to blame. “We have a problem in Saxony”, Dulig told the press.

According to German-language dailies, Maik G., the State Office of Criminal Investigations employee who triggered the scandal, is on holiday right now. His employer asked him to interrupt his vacation since the occurrence at the protest had to be clarified rapidly.

Today, a meeting between representatives of the police command in Dresden and editors of ‘Frontal 21’ were supposed to meet. It was unclear whether the popular TV magazine would get an apology or not, or if the outcome of those talks would be announced publicly.

Generally, Pegida and other radical right-wing organizations, as well as xenophobic views, are wide-spread in Saxony, in spite of the fact that it is a province with a small percentage of foreigners.