A European Teenager in Mexico City 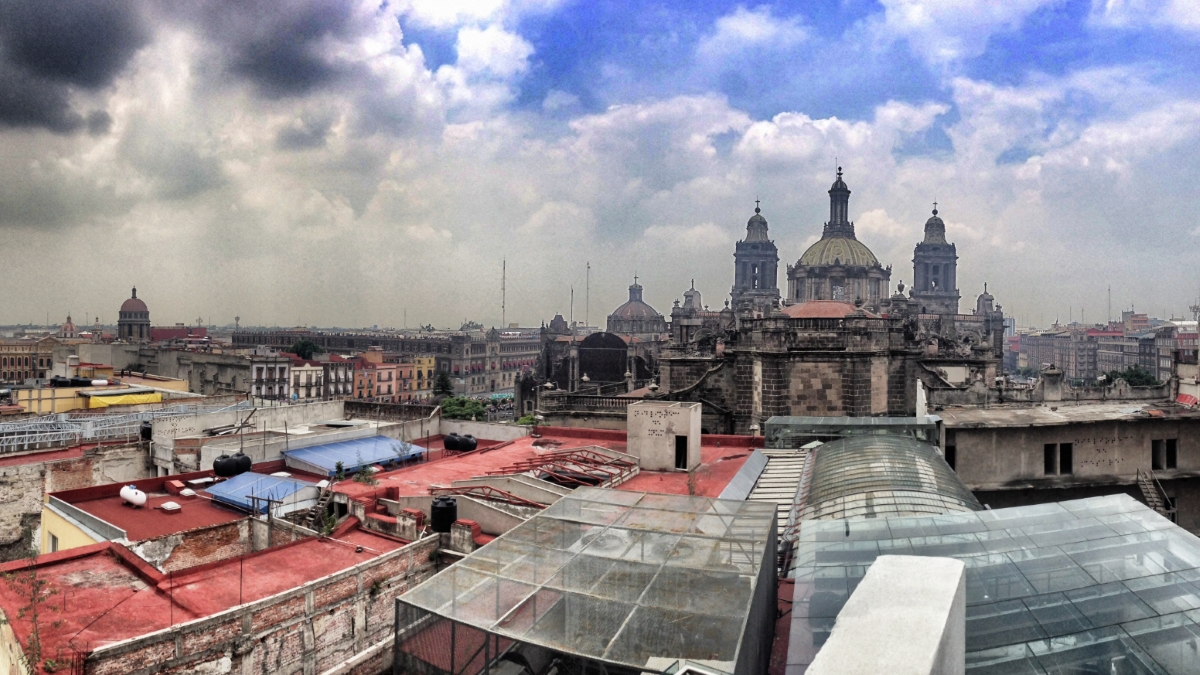 In August of 1978, when I was 13 years old, my mother and I moved to Mexico City. The transition from a Hamburg commune kid to an expat teenager in the largest city on the planet amounted to nothing less than a culture shock. But this new surrounding, which could not have been more different from what I was used to, had positive effects.

A few months earlier, in the spring of 1978, we had prepared by reading the Spanish lecture book “Eso Es 1”. “Quantas botellas hay en la maleta? Dos ó tres?”. The answer: “Quatro.” Two months later, we were sitting on a McDonnell Douglas DC-10, which took us from Frankfurt via New York to Houston and on to the Distrito Federal, Mexico’s capital. DC-10s did not exactly have a good reputation in 1978, but the worst crashes, caused by design flaws, were yet to come. Our flight did reach its destination, without losing any engine or baggage door, thus without any explosive decompression.

The heat and moisture over there almost knocked me out, when the aircraft doors opened. Here I was, a teenager going through his voice break, in a new world. The next two years would be exciting and difficult. I would learn a lot about Mexico, Latin America with its culture, including the music, and about life.

After settling down in a furnished apartment in the more elegant San Angel quarter, the first adventure was Insurgentes. This road is actually part of the Panamericana, with a total length of 48,000 kilometers (30,000 miles), which starts in Prudhoe Bay/Alaska and ends in Ushuaia/Argentina. The Mexico City stretch is about 40 kilometers long. Riding a bus on Insurgentes, from San Angel to El Paseo de la Reforma in the city center, was better than watching a movie.

On the bus, everyone was a lot shorter than me. I was actually the only passenger who could not stand upright, since I would have hit the roof. In this vehicle, it smelled of all body fluids you can think of. Indigena ladies were breast-feeding their babies. The bus driver tried to impress female passengers standing next to him by intentionally hitting the bus in front of him, pushing it a few meters into the upcoming intersection. In short: This bus was full of life and action.

We checked out the usual tourist sites, including the Museum of Archaeology at Chapultepec Park and the Aztec pyramid city of Teotihuacan. We had Carne con Frijoles at Sanborns, walked a lot and also visited some Pacific Ocean resorts, which in the late 1970-s were still cute and virtually empty. Puerto Escondido and Puerto Angel were great, while the village of Zipolite, located right on the beach, looked like paradise. A few “Flower Power” dudes from the U.S. were here when we arrived, enjoying the white beaches, the fresh fish and the green dope. I learned a few things down here:

1. Never step on scorpions.
2. Ants might actually bite on certain continents.
3. Public toilets are not fun to sit on, especially after water outages lasting for several days.

Since I had learned how to drive cars at age 8 in Denmark and because the Mexican police was happy with 2 Dollars in bribes when they caught anyone without a driver’s license, I could even drive long stretches of the trips we took, at age 13.

When we were back in Mexico City, and once we had successfully fought “Montezuma’s Revenge”, the usual diarrhea, I was ready for school. “El Colegio Britanico” (aka “The Edron Academy”), was located in a tiny cobblestone street, which was part of a more expensive quarter. What a cool place! Our English and Spanish teacher, Mr. Burns, a long-haired Brit in this early 40s, actually smoked while teaching. The coolest guy ever. Our literature teacher, a beautiful lady whose name escaped me and who would usually wear short skirts, spread her legs under the desk, on purpose. She obviously enjoyed those moments, when some of the boys and I stared at her panties. The chemistry teacher, another long-haired guy, shouted at me like hell when I had paroxysms of laughter.

The other guys, especially my friends Narcis and Brenton, were very kind and great people to be with. At the same time, I became interested in girls. There was Gabrielle, a very red-haired, funny power-talker from New York City, Henrietta, a Swedish blonde I never really got to know, but it seemed we had a lot in common, there was Lynn, another American girl, who was extremely nice, but serious as well, and Veronica from the grade above us. What a beauty! The same applied to Graciela, who attended the German school, but I was too shy and naive in some regards.

Since my mother was always busy, founding charity projects in the slums around Mexico City, and because, with my teenager mentality, our relationship could have been better, I entertained myself by taking two-hour bus rides to the carting track in the Satélite quarter. Also I found out that, in Mexico, I looked more like an 18- than a 13-year old. In order to test adulthood, I purchased a ticket for a German soft porn movie with Sylvia Kristel, which was shown at a cinema in the center. Even though this piece of art was “Rated R”, I did not run into any difficulties. An interesting flick at the time.

Soon, 1979 came up, the best year in music. Bus drivers played sensational new releases on their on-board radio systems, such as “The Wall” by Pink Floyd, “Bobby Brown” by Frank Zappa, great Steely Dan tracks, “Hydra” by Toto and tunes from the “I Am” album by Earth, Wind & Fire. At a Jazz festival we went to, at the Auditório Nacional, I got see Irakere live with Arturo Sandoval and Paquito De Rivera. What a killer gig! It influenced my musical taste a lot. For the next year, I kept on going to the “Libreria Gandhi” store at Miguel Angel de Quevedo in order to buy all Irakere releases I could find. With my class mates, we watched movies such as “Grease” or “Moonraker” (the best Bond film ever).

The parents of most of my friends were rich to super rich. I enjoyed being served lunches by servientas, skinny dipping in their huge pools and partying hard to far out music in their palaces, while, just a few kilometers away, millions of people in the slums had to think about how to get food on the table on a daily basis. The contrasts could hardly have been sharper.

One big earthquake hit Mexico City in late 1979. By that time, we lived in Iztapalapa. My school was about two hours away, but at least we saw the Popocatepetl volcano from where we lived. The earthquake hit before 5 a.m.. Everything fell out of our shelves, the house was literally jumping around. When we got out on the street after about 20 seconds, all neighbours were sitting there, praying and crying. The steel covers of all manholes had popped out, the pavements were broken. Of course we were reluctant to reenter the house for quite a while.

The worst part of the earthquake? We had no running water for the next three weeks. There were no showers, all toilets were brimmed. Besides, how in the hell were we supposed to cook without water? Luckily, only one large building in the city had been completely destroyed during the quake. Since this danger is imminent in Mexico, most high rises, such as the Torre Latinoamericano, are built on large water tanks, which successfully keep buildings standing in most cases. But the next big earthquake, which happened in 1985, was too strong for many constructions.

The beauty of Mexico is as stunning as the many problems in this country are serious. Back then, the drug war had not broken out yet. Nowadays, it is simply too dangerous to take trips or to live there. Reading all those travel warnings, e.g. on the U.S. Department of State’s website, will give anyone a good idea of the “shituation”. But the terrible poverty, exploitation and corruption were always present.

Mexico City was exploding in the late 1970-s. Traffic was a catastrophe in this ever growing mega city. In 1980, city hall decided to take a radical step. They just cut lots of 5-lane roads through the city, the so-called Ejes Viales. Any houses or buildings standing in the way were simply torn down. There was no other way, in the truest sense of this expression. In the Metro, which had been built by the French a decade earlier, millions of passengers had to be squeezed into the trains by people hired for that purpose. During rush hour, men and women were separated in different carriages in order to prevent sexual abuse.

European ladies we got to know, most of whom were part of social projects in the countryside, were raped, one of them several times. In the Uno Más Uno daily and in other publications, it said that there was one rape per day on the campus of the National University alone. This was by far not the only problem women had (and probably have) in this macho culture.

Mexico is definitely ambilvalent. A wonderful country with extremely kind people, but also with unacceptable problems.

After two years in Mexico City, in the summer of 1980, I returned to Germany on my own, where I attended a boarding school. I just wanted to go, even though at age 15 I was really too young to decide, at least from today’s perspective. But these two years and lots of visits which followed during the next five years definitely widened my horizon.

Bulgaria: Bats and Darkness in Caves Around Belogradchik