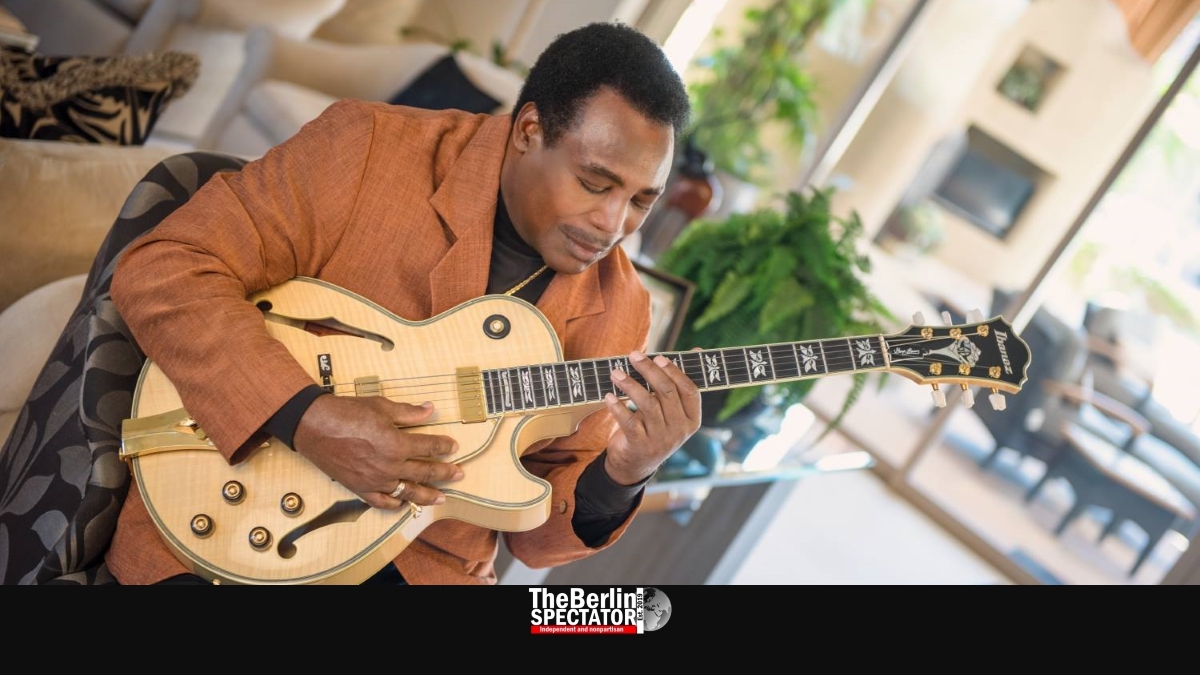 Calling any artist “one of the greatest musicians of all time” is wrong and not recommended, unless he really is. There are very few living musicians that description might apply to, and there is one it definitely applies to. His name is George Benson.

He is the one who delivers the full range of “Real Music”, including sophisticated American Jazz-Funk, Straight Ahead Jazz and the smoothest Soul ballads ever. He also satisfies his fans with an overdose of professionalism.

No matter what he does, playing like a modern reincarnation on Wes Montgomery, singing a love song, or making people dance by performing one of his Funk hits, he will fascinate anyone who understands music, and has done so for 56 years.

George Benson also is the guy who really loves what he does. While others just wish their gig was over before it began, Benson seems to enjoy every minute of every gig.

There is also the surprising side: The father of seven is a fundamentalist Christian, even a Jehova’s Witness. Not only that, but he is a missionary for them, and a money source. This aspect does not really fit into the more intellectual Jazz world or the idea many fans might have of their idol.

Parts of his own crew are looking at this with mixed feelings. “Sometimes he walks up to one of us and starts talking about the scriptures”, a member of his usual travel party told the author of these lines in 2007.

While many bands talk about multiple orgasms, forbidden tablets, getting wasted and that kind of thing, George Benson prefers to talk about “God” and whatever it says in the best-selling book called ‘Bible’.

From his own perspective, Benson serves God. From the perspective of most of his millions of fans, he serves humanity, by delivering uplifting music of high quality, the perfection of this art form called music, and genius guitar playing.

It all started when “Little Georgie” played the Ukulele at a drug store in his birth town of Pittsburgh, Pennsylvania. And it really started when George Benson recorded “The New Boss Guitar” album with The Jack McDuff Quartet in 1964, when he was 21 years old.

Wes Montgomery, obviously a big influence on Benson, was still alive and active at the time. Montgomery might have known that young player would become one of his heirs one day.

Listening to that “Big Boss” stuff today is interesting indeed. From today’s perspective, “Shadow Dancers” sounds like a soundcheck, which it was, considering everything Benson would come up with until today. That 1964 tune was the soundcheck of a career which would make him develop into the best ever.

Six years later, his eighth album “The Other Side of Abbey Road” was released. The cover shows him crossing a street with his guitar, like the Beatles did on one of theirs. Except the city he was shot in is American and dirty. It might be some dilapidated corner in Pittsburgh or New York City.

At that point, George Benson was still experimenting, looking for the sound that would thrill the masses. The album title “The Other Side of Abbey Road” suggested his approach was completely different from what the Beatles did. And it was. But still the four Brits seemed to be the measure of all things. Benson even covered “Come Together” on that album.

Another six years later, in 1976, George Benson had found his unique sound, his trademark. He had thrown the overly intellectual traditional Jazz approach overboard and concentrated on delivering music which was positive, bright, a sound which people understood and which was still of the highest quality.

That year, 1976, was a defining one for George Benson. “One Rock Don’t Make No Boulder”, a killer track from his album “Good King Bad” was already an excellent preview of what was about to come. Shortly after recording that one, he switched over to a new record label.

Those folks at Warner Bros. knew what Benson needed. They knew they had pulled the big one. And vice versa. With them, he immediately recorded his “Breezin’” album, an important one. With this record, George Benson reinvented American Jazz-Funk, also by showing how smooth it can be.

Warner Bros. gave him absolutely everything, including the most powerful weapon any “Real Music” artist could have. The latter was producer Tommy LiPuma. He pointed in the right direction and generally had a very positive influence on George Benson’s work.

This was it. Those weird record covers were a thing of the past. Also the master artist’s music would now appeal to a much wider audience.

When it comes to George Benson, there are so many surprising aspects. One of them is the fact that “Breezin’”, the title track of that album, and one of Benson’s big Jazz-Funk hits, was written by none other than Bobby Womack, one of the greatest Soul singers of all time. He had composed that piece a few years before, for a Hungarian genius guitarist by the name of Gábor Szabó.

More and more, George Benson used another great gift he has: his voice. He became so successful as a vocalist that, at one point, his manager even suggested he should forget about that guitar. But he refused to put it aside.

Years before, it was the other way around. One of the managers at his first label supposedly told him he was a guitarist, but not a singer. Wrong again. He was, and still is, both.

In 1977, something happened. George Benson got two Grammy Awards. One was for the old approach, namely the “Theme From Good King Bad”, and one was for “Breezin’”, the new approach. From that moment onward, nothing would stop George Benson.

Something else happened in 1977. It was one of the most brilliant live albums ever, entitled “Weekend in L.A.”. Yes, “We All Remember Wes”. And we all remember “On Broadway”, which had even been sung by The Drifters in 1963. “They say the neon lights are bright on Broadway.” Yes, they are.

One of the most brilliant drummers on the planet, Harvey Mason, was part of those gigs they recorded for the album. In “On Broadway”, he played one of the most breathtaking and most recognizable drum solos of all time. Hell! What a solo! By the way: In 1979, Benson’s studio version of “On Broadway” got something really nice: a Grammy.

Millions of albums followed. Some were very Soulful, some were a bit too commercial, some were both and some contained everything, from Jazz-Funk pieces via Soul ballads all the way to Jazz classics. There were excellent collaboration albums such as the one entitled “Collaboration”, which Benson recorded with fellow guitarist Earl Klugh, another genius.

Also there was one with the late Al Jarreau, in 2007. With “God Bless the Child”, recorded in cooperation with Jarreau and Gil Scott, Benson got yet another Grammy. Other collaborations were nice too. One wonderful example would be “We Got the Love”, which Benson sang with Chaka Khan.

In 2007, George Benson hit the festival organised by the author of these lines, in Sofia, Bulgaria, with the late Al Jarreau. While the master guitarist brought along the meanest tour manager ever, who gave the promoters big headaches, the gig itself was nothing less than perfect.

They sang tunes together, Al Jarreau did some songs on his own, and George Benson delivered the entire spectrum. He even came to the after-show party. After a while, he asked to be taken to his hotel, but on the way out he looked at that Gibson guitar standing there. So he joined the fun for an hour, playing the coolest jams.

It was good talking to George Benson about music, namely about American Jazz-Funk. The scriptures did not come up during that conversation. He is a really nice guy, but seemed like an outsider a little, even though he was and always is the star of the night.

Are there contradictions between Benson’s two worlds? On the one hand there is all of that fun on stages. In that party’s case, it was a nightclub. On the other hand, the Jehova’s Witnesses are not exactly known for celebrating “Real Music” parties at nightclubs. That contradiction might bother him somehow.

Once every few decades, another “best” is born and hits the stages once he (or she) is old enough. Norman Brown, another American guitarist of high caliber, is the next heir. The two even played together at least once. George Benson’s expression said it all: He was definitely very impressed by Norman Brown’s incredible playing.

George Benson’s discography contains lots of treasures. On his “In Flight” album, “The Wind And I” and his version of “Valdez in the Country” are too good to believe. One of his best recordings, the 1979 double album “Livin’ Inside Your Love”, contains some of the nicest sounds ever recorded, including “Welcome Into My World” and his “Soulful Strut”.

In 1980, the hit machine Benson started delivering. The first one was “Give Me The Night”, the next one “Turn Your Love Around”. The 1983 album “In Your Eyes” included wonderful stuff too, including the ballad “Use Me”.

George Benson’s 36th studio album, in which he honors Nat King Cole, was released in 2013. And it looks like a lot more is to come very soon. The album “Walking to New Orleans” will be released on April 26th, 2019, and it is a big surprise: The master will be honoring and interpreting Chuck Berry and Fats Domino. This is a new direction. He is actually doing Rock’n’Roll. But he will never completely leave “Real Music”.

By the way: George Benson is not 18 anymore. The guy who has delivered perfect tunes and perfect gigs all along, will be 76 on March 22nd, 2019.

He is a co-inventor of sophisticated American Jazz-Funk. He is also Wes’ heir, an innovator, and the guy who understands what the audience wants, even though the audience might only know what it wants until after he delivers it. George Benson is the best. Period.

It gets even better. The same George Benson will be hitting stages in Europe this summer, including one in Switzerland and two in Germany:

There are more European tour dates for George Benson. He will be in the U.K., in Spain, France and Italy too. Details can be found here.