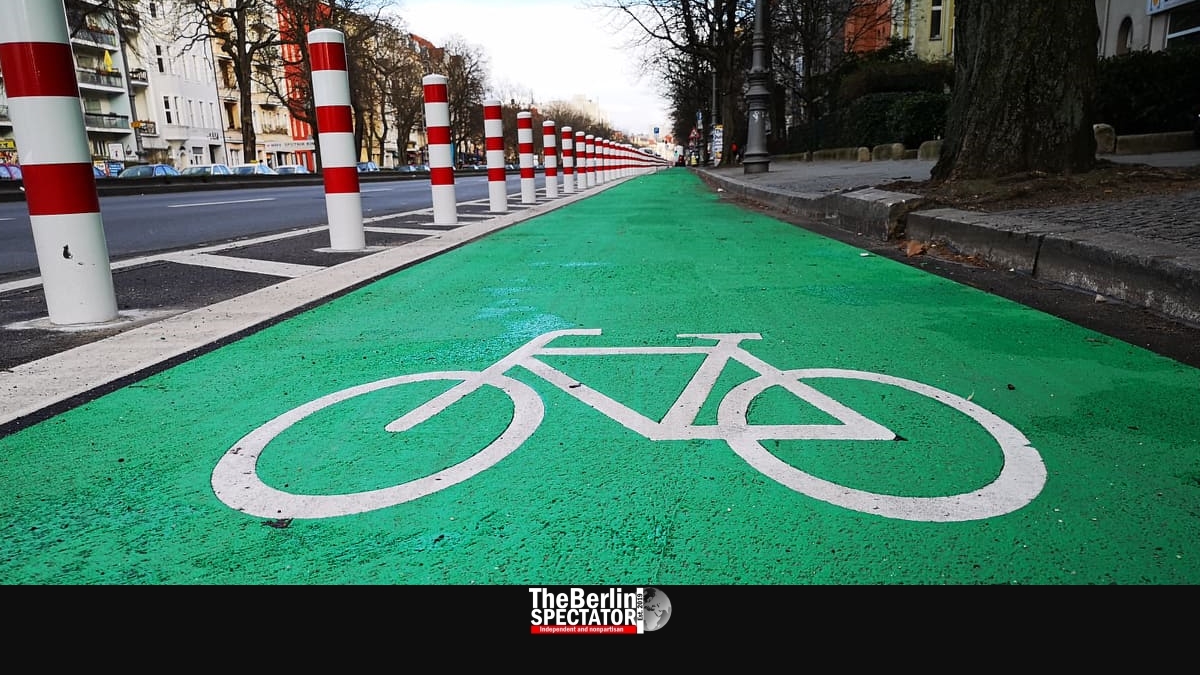 Berlin is in the process of building new bike lanes. They are green, wide and protected by bollards. Right now construction workers are installing one of them on the southern side of Hasenheide, a larger street which separates the boroughs Neukölln and Kreuzberg.

Part of that new bike line was already completed. It does feel safe indeed. The lane is a lot wider than the old bike lanes all over Berlin. The surface feels good, it does not seem to be slippery when wet and it provides enough space for faster cyclists to overtake slower ones without being forced to enter the part of the road used by cars and trucks.

Many of Berlin’s old bicycle lanes are damaged. The roots of trees have caused bumps over the years, which can make cyclists fall. Also they use space pedestrians should have. Many kilometers of Berlin’s bike lances were just drawn on streets without any protection.

The new approach is the beginning of the implementation of Berlin’s plans to make the city safer for both cyclists and pedestrians. At this stage, the municipality is still working on its overall concept.

Decreasing the number of accidents involving cyclists, especially deadly ones, is one of the goals the Berlin Senate is pursuing. Eleven bicyclists were killed on the streets of the German capital in 2018. Several of the victims were run over by large trucks making right turns.

Generally, the city intends to cut the space cars have. Pedestrian lights will supposedly be switched to green for longer intervals. In some parts of Berlin, the Senate wants to restrict cars more and more, and even ban them completely.

Pedestrians are in danger too. One third of all deadly accidents in Berlin involve at least one of them. The new approach will likely decrease the number of this type of accidents as well. An improved infrastructure for pedestrians is one of the measures which will be taken.

A new so-called “mobility law” for Berlin is supposed to be passed in early 2020. Some Berlin boroughs want to become good examples for the new policies. One of them is Friedrichshain-Kreuzberg, where Mayor Monika Herrmann wants to create several traffic-calmed zones long before the new approach is official.

ITB Berlin: A Morning at the Largest Travel Trade Fair