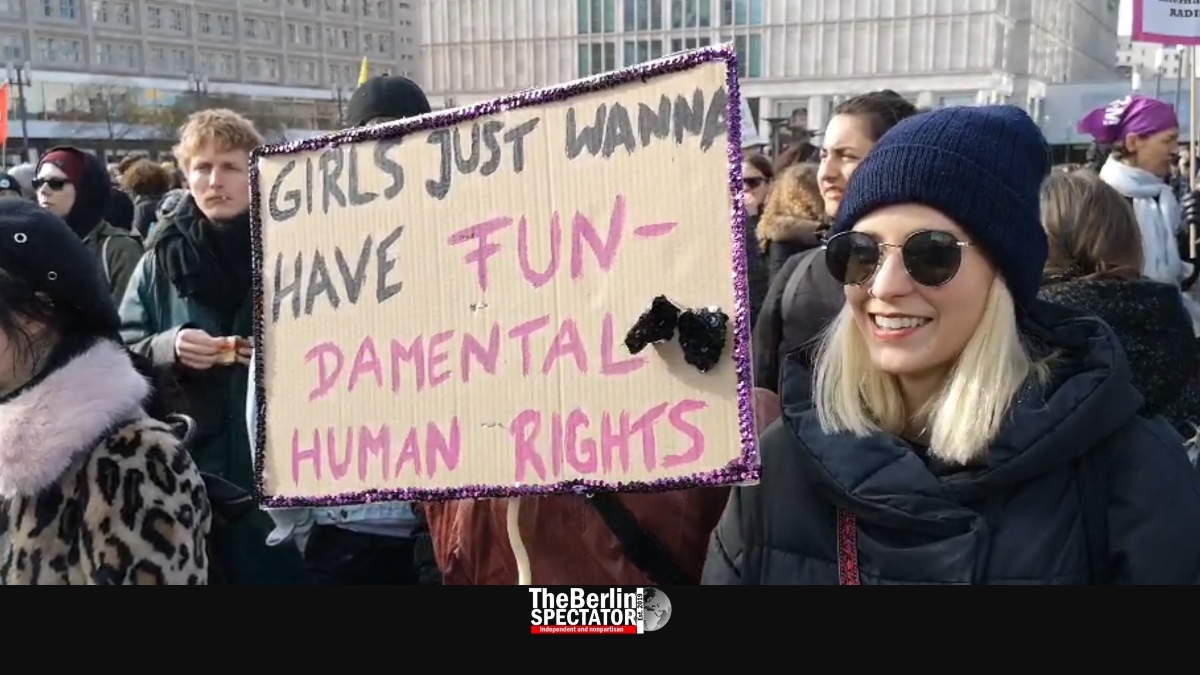 An estimated 15,000 people came to Alexanderplatz, which used to be part of the city Center of East Berlin thirty years ago, in order to demand gender equality. They criticized patriarchal structures and a society in which profit maximization has a high priority.

It was a rally against the oppression of women in the world, as well as against injustice in Germany. For instance, the participants demanded equal pay for equal work.

On countless banners reading “Viva la Vulva” or “Do not apply laws to my body”, especially young women expressed their pro choice position and rejected abortion laws passed by parliaments with male majorities.

Many supporters of the Iranian opposition took part too. They protested against the Teheran regime and for freedom, especially for women in Iran.

Representatives from three major parties present in the Berlin Bundestag took part. There were banners showing the logos of the Social Democratic Party (SPD), the Greens and ‘Die Linke’ (‘The Left’), the three parties which rule the city state of Berlin.

Some communist groups took part too. On banners, they denounced “imperialists” and pleaded for a world revolution, wearing Palestinian keffiyeh scarfs.

Once Alexanderplatz, one of the largest squares in Berlin, had filled up, several tram lines needed to be stopped. Most participants used the U-Bahn, the Berlin equivalent of subways, metros or undergrounds, to get there.

The weather did not really play ball. A storm pulled down some banners. It rained temporarily. Also the event was not organized well. During the first hour, nobody announced anything on the tiny stage set up on site.

The Berlin House of Representatives had recently decided to make International Women’s Day an official holiday. Today was the first time the city’s residents enjoyed a day off on this occasion.

But the latter did not apply to police. Some 150 officers were on site, observing the situation and dealing with traffic. Many of them were on standby, just in case.