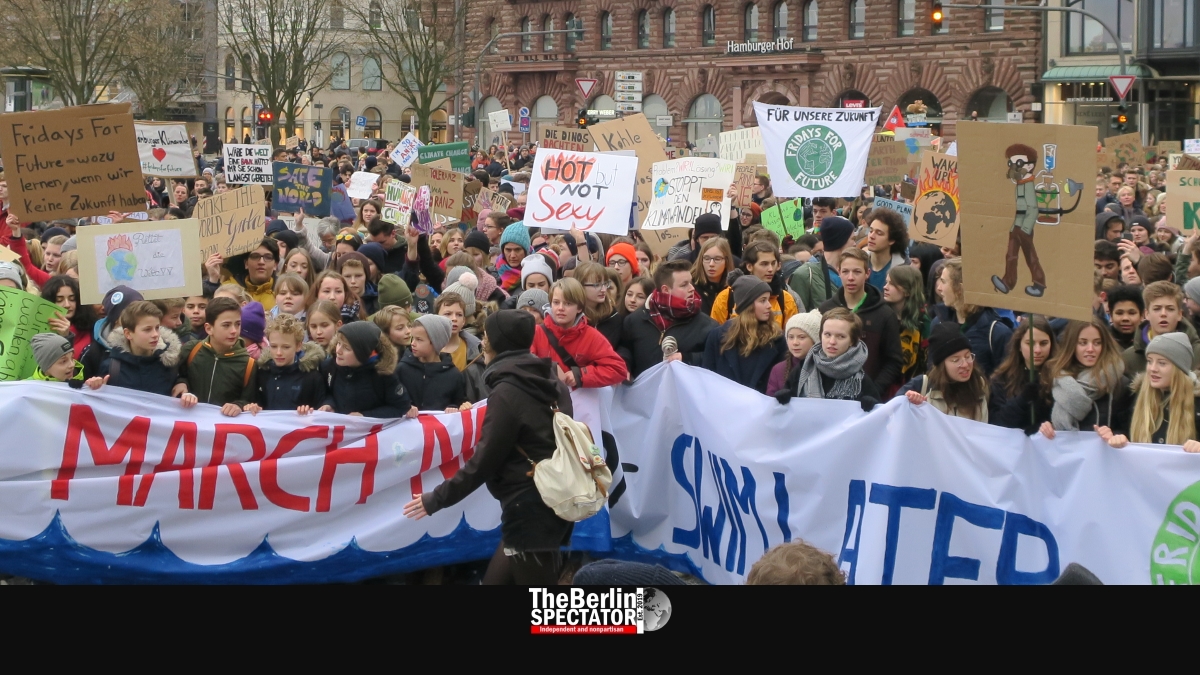 Fridays for Future (F4F), the movement against climate change founded by the Swedish youth activist Greta Thunberg, announced protests in as many as 225 cities and towns all over Germany. All of them will take place on Friday, March 15th, 2019. The list contains all major cities and ten percent of all towns in the country.

Globally, there will be demonstrations in 1,200 cities, located in 50 countries, according to the organizers.

One of the biggest F4F events in the country is scheduled to take place in Berlin, where some 5,000 students are expected to participate. The protest starts on Friday at 10:00 a.m. at Invalidenpark, near the city center.

Since Greta Thunberg, who was nominated for the Nobel Peace Prize by Norwegian politicians yesterday, initiated the Fridays for Future movement, more and more teenage students have joined the protests, for which they usually skip school.

The German division of the movement announced, the protest would be loud and it would have a clear message. “On March 15th, there will be strikes for the climate all over the world”, a statement read. “That is because we are running out of time, because we are in the middle of the biggest crisis of mankind, because we, the young generation, will have to pay for it one day.” Inaction was not an option anymore.

A generation which was accused of being apolitical only recently is suddenly turning into the opposite. The movement is growing.

According to the Berlin Police Department the demonstration will head from Invalidenpark to Wilhelmstrasse, Willy Brandt Strasse and Otto von Bismarck Allee, before returning to its starting point.

In Berlin, the first F4F protest took place on January 18th. Since then, students have hit the streets every Friday, in order to raise awareness for the issues connected to global warming and the need for immediate action.

F4F organizers in Hamburg announced their protest would commence at 2:30 p.m. at Hachmannplatz. In the northern city, they may have wanted to prevent students from skipping school, by scheduling the demonstration in the afternoon.

The Frankfurt version of the student protest starts at 12:00 non at Bockenheimer Warte. Cologne, where participants will meet at 9:00 a.m. at central station, probably has one of the earliest protests. And in Munich, the F4F event will be taking place from 11:00 a.m. at Odeonsplatz.

The Fridays for Future movement, which used to be known as Youth for Climate or Youth Strike 4 Climate, started in Stockholm, where Greta Thunberg, who is 16 years old, started staging little protests in front of the Swedish Reichstag.

Not only has the movement grown substantially, but it is also being supported by renown scientists. In the three German-speaking countries, 12,000 of them established the initiative ‘Scientists for Future’ and adopted the original movement’s message on climate change.

Recently, Germany’s Chancellor Angela Merkel had praised the youth movement in her weekly podcast, saying she was glad students were protesting for climate protection. More conservative colleagues of hers in her party CDU criticized her for applauding adolescents who were skipping school on a regular basis.