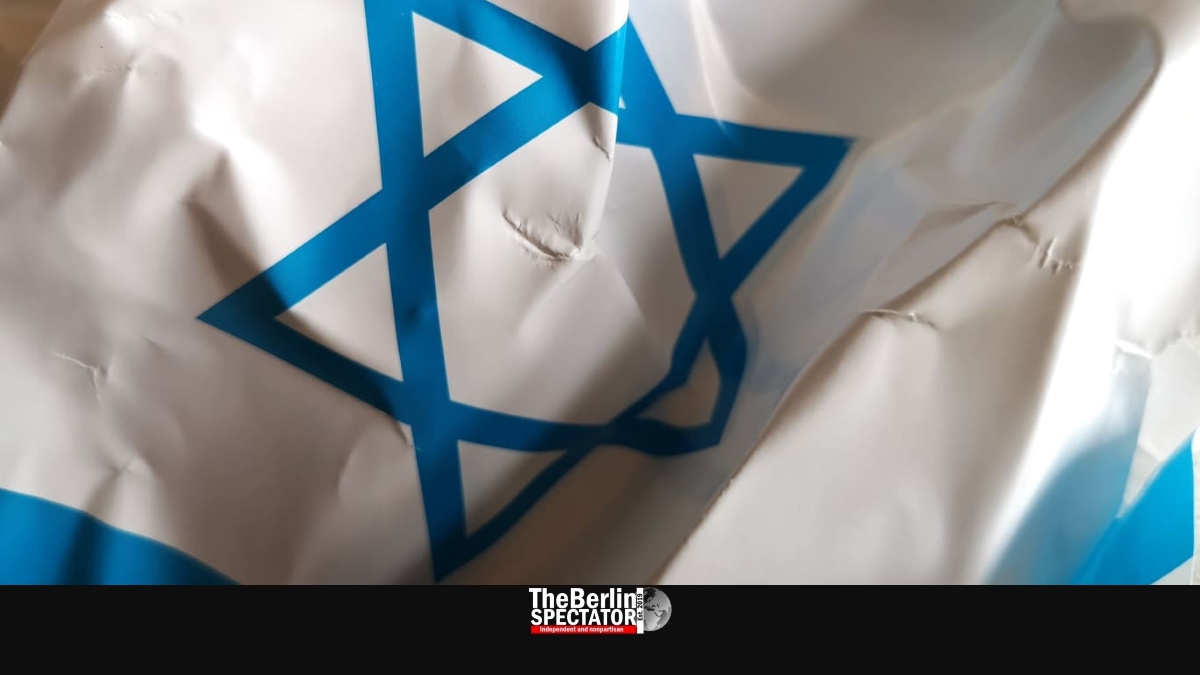 This week has been an interesting one, also because the obvious contradiction between the Berlin government’s promise to support Israel on the one hand, and its participation in the delegitimization campaign against the predominantly Jewish state at the United Nations on the other, was highlighted, thanks to two members of the Berlin Bundestag.

On Thursday, the wrong people said the right things, because the government gave them the opportunity to do so. Berlin seems to be determined to continue its weird course, even though Chancellor Angela Merkel usually is the right person who says the right things. But let’s start at the beginning:

Frank Müller-Rosentritt and Bijan Djir-Sarai are MPs for the liberal party FDP. Supported by their parliamentary group, they handed in a motion which basically said Germany should actually live up to its raison d’etat, by supporting Israel at the United Nations instead of stabbing it in the back.

Had it been approved, the motion would have prompted the government to distance itself from “politically motivated, one-sided initiatives and alliances of anti-Israeli U.N. member states” and to protect Israel from their condemnations.

The two liberal MPs did have a point here. A large group of Arab and other Muslim states keeps on handing in resolutions against the one country they want to get rid of altogether, Israel, accusing it of war crimes, Apartheid and what not. In most cases, Germany has voted in favor of those resolutions, while selling itself as Israel’s best friend at the same time.

In the FDP’s motion it says Germany should resist forces in the Middle East which are questioning Israel’s right to exist using “partially aggressive rhetoric”, counteract attempts to delegitimize the country, and use its influence to make sure U.N. resolutions are balanced and “based on facts and actual actions”.

Here the motion reveals the scope of the unbelievable scandal. Yes, Germany actually votes for resolutions which are not based on facts and actions certain countries actually take, but on antisemitism hidden behind criticism of alleged Israeli policies, meaning on conspiracy theories.

Finally, the FDP’s motion would have told the government to work on coordinating its new Israel-related position at the United Nations with the other E.U. states, and to convince them to adapt the new approach as well.

The scandal has several layers. First of all, the fact that this motion was necessary and overdue is already hard to believe. Germany keeps on voting with Israel haters, for resolutions full of false accusations? Well, yes.

Is there an aspect which is even harder to believe? Yes. It is the fact that the motion was rejected by the Bundestag on Thursday. In the Social Democratic Party of Germany (SPD) every single MP voted against the motion containing the right notion. One single member of the Christian Democratic Union’s (CDU) parliamentary group voted in favor, one abstained, while all others voted against. Interesting. And all Greens abstained.

Obviously, all FDP MPs voted in favor. And the wolf in sheep’s clothes, which is the so-called ‘Alternative for Germany’ (AfD) mostly voted in favor, with three abstentions.

Yes, a party members of which take part in protests with Nazis, a party the chairman of which wants to be proud of achievements of German soldiers in both world wars (yes, the wording “both world wars” does include the second one, in which Nazi Germany not only attacked the larger part of Europe, but also murdered six million Jews and tens of thousands of homosexuals, Gypsies and opposition members), a party which fails to ban members who factually are Nazis, voted the right way in order to seem like the sheep rather than what it actually is, because the government provided it with the opportunity to do so.

Is there even more scandalous ‘material’ here? Yes, unfortunately. The CDU’s MP Roderich Kiesewetter even chose to defend the government’s scandalous behavior in this regard. He said the FDP’s motion had been based on the quantity of U.N. resolutions only, which it was not.

Kiesewetter even said Germany needed and wanted to support Israel in global organizations. He even conceded the U.N.’s General Assembly and especially its so-called Human Rights Council, which is being run by some of the world’s most brutal Human Rights abusers, had a very one-sided voting behavior. Well, yes. That’s what this whole thing is about.

Then he attempted to dissect the wording of the motion. Oh, and he found a way to include the favorite word of all Israel critics, the wild card which will always convince those who are convinced already, the magic word which will show people where you really stand, in a subliminal way: settlements.

Oh yes, erecting apartment blocks in no man’s land, in the absence of the peace the other ‘side’ does not want as long as the agreement does not include getting rid of Israel, is so much worse than paying terrorists for murdering Israelis, right? It is so much worse than attacking Israel all the time, in order to accuse the country of defending itself afterwards. Sure.

In his speech the SPD’s Nils Schmid accused the AfD of shedding crocodile tears regarding antisemitism while harboring antisemites in the federal state parliaments – and rightly so. Then he used two arguments which backfired, by saying Angela Merkel had declared supporting Israel a raison d’etat and by mentioning a popular quote by Foreign Minister Heiko Maas who said he had gone into politics because of Auschwitz. Exactly. That is what makes the whole thing even less comprehensible.

Schmid admitted things tend to be one-sided at the U.N. whenever Israel is involved, but said the world organization was still the best international instrument available. It was important for Germany to try to find a consensus. Well, it obviously found it, by voting with Israel haters in many cases.

Germany has recently voted in favor of 16 out of 21 U.N. resolutions which were full of conspiracy theories and plain antisemitic. Even the fact that so many resolutions against Israel are being passed is antisemitic in itself.

The U.N. has come up with more resolutions against Israel than against all other states combined. Shall I repeat that sentence, in order to make it stick? Let’s face it: Even the worst antisemites probably see that there is something like an imbalance.

Oh yes, the top layer of the scandal is the fact that those who rejected the motion, supposedly because of its wording, but who admitted there is an issue regarding the treatment of Israel, the best friend, neither presented nor announced an alternative motion or approach, one with a better wording, from their perspective.

Bijan Djir-Sarai, one of the authors of the motion, said he hoped they had started a debate which would continue to have an effect. Yes, let’s hope so. And let’s keep at it.

By the way: The U.N. just voted the Islamic Republic of Iran to a committee that judges complaints alleging violations of women’s rights, called the U.N. Commission on the Status of Women. Yes, something is wrong.

The FDP’s motion can be accessed here (in German).