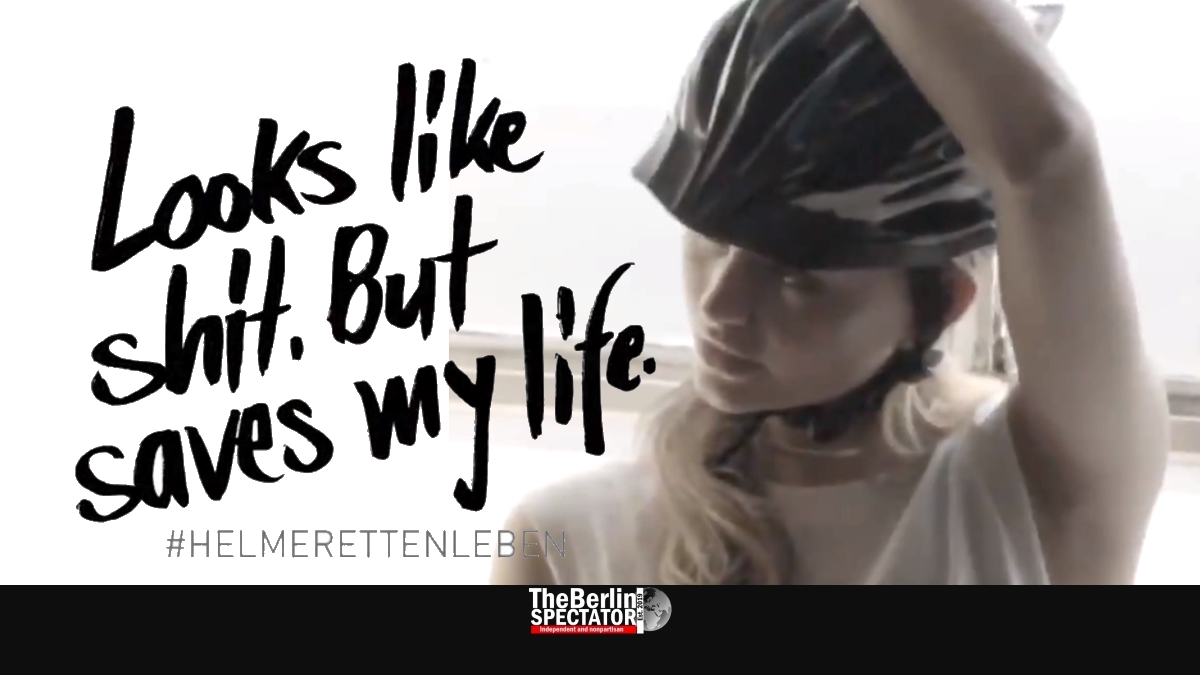 The Berlin Ministry of Transport has launched an unconventional advertising campaign for street traffic safety, which is supposed to make bicyclists wear helmets. “Looks like shit, but saves my life” is the campaign slogan.

In a short video, Germany’s Transport Minister Andreas Scheuer, a conservative from Bavaria, takes a freshly printed campaign poster out of a printer and says the campaign had not exactly been written in officialese, but it did bring the message across. He is probably right.

This campaign was launched in cooperation with ‘Germany’s Next Top Model’, a popular TV show which involves beautiful ladies who want to become models. It is part of the big initiative ‘Runter vom Gas‘, which basically means ‘Take your foot from the accelerator.’

For the main advertising campaign, the ministry commissioned the comedian Hans-Joachim Heist who is better known as Gernot Hassknecht, a character he plays in a satirical news program on Germany’s ZDF TV network. Hassknecht is a choleric, quick-tempered man the size of Danny DeVito, who also resembles him and swears like hell.

Scheuer’s “Looks like shit, but saves my life” campaign is a reaction to a poll about the use of helmets on bicycles. As it turns out, many young Germans do not use them because they believe they affect their looks in a negative way. The campaign intends to change that, by suggesting it was cool to use helmets even though they might “look like shit”.

In large German cities such as Berlin or Hamburg, hundreds of bicyclists get injured in accidents every year, while dozens die. Some of the worst accidents of this kind involve heavy trucks making right turns. Especially in Berlin and Hamburg, politicians are discussing the question whether to make so-called turning assistants mandatory for big trucks.

But many injuries cyclists sustain could be prevented if more of them would use helmets. Hundreds of thousands of young Germans use their bicycles every day, in order to get to their universities, schools or work places, mostly without helmets.

The latest advertising campaign for their use already caught the attention of Germany’s biggest tabloid ‘Bild’. Because the campaign conveys a serious message in a funny way, it will most likely stick in the minds of those who see those ads, or articles about them.