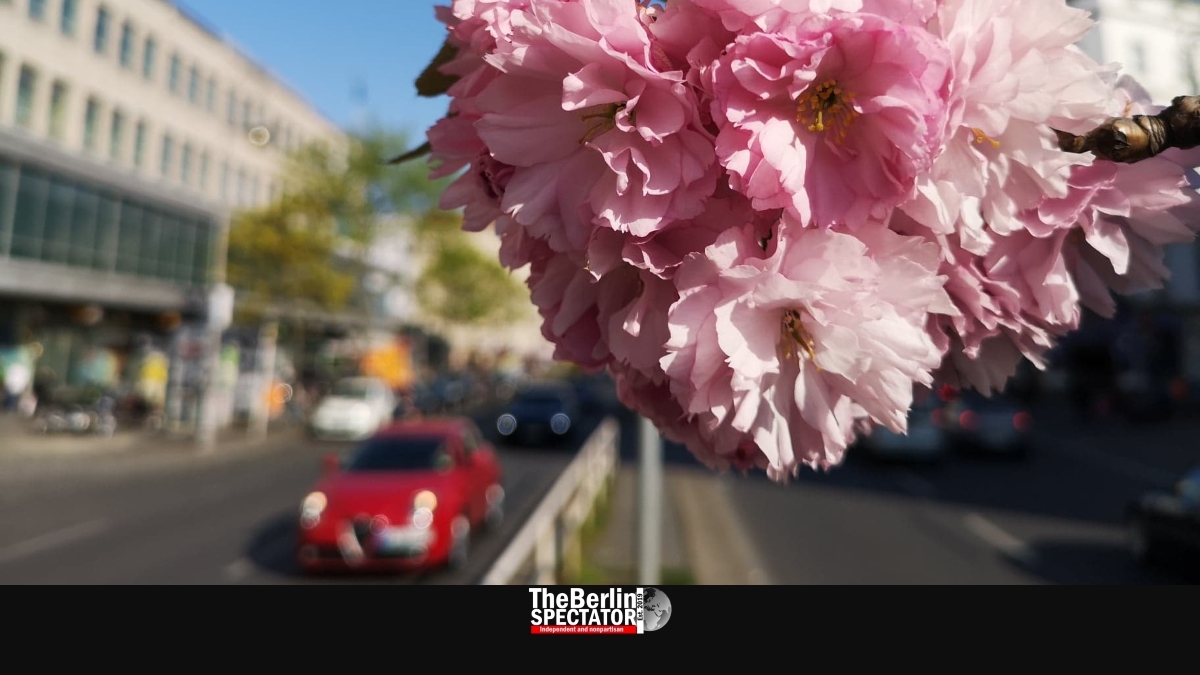 Even ugly parts of Berlin became beautiful this weekend and the city felt like a holiday resort. Around Hermannplatz, the prettiest blooming blossoms ever were hanging from trees. Pedestrians stopped and photographed them from all angles with their Chinese-made smart phones.

A star called Sun, 330,000 times as big as Earth, provided a lot of light and warmth from the center of the solar system on Good Friday, which was also the first day of Passover. Not only Berlin, but all of Germany, was in for wonderful spring weather throughout this long weekend.

Berlin was noticeably emptier. Due to the ongoing Easter vacation, many residents took trips abroad or to other parts of Germany. Those who stayed benefited. Mostly Turkish families populated the parks in Berlin’s Neukölln, Kreuzberg and Friedrichshain boroughs in order to start barbecuing. Others walked their four-legged companions. The playgrounds were crammed too.

Throughout the city, there were thousands of vacant parking spots. Tempelhof Airport was a popular destination. So was Alexanderplatz, were vendors at the ‘Easter Market’ offered items nobody needed. Walking along the Spree river was extra nice on Friday. The relative quietude in Berlin is temporary.

In many of Germany’s federal states, including Berlin, Good Friday is an official ‘quiet holiday’. What this means is that dance events and parties are forbidden. In the far less religious northern half of Germany, including Berlin, that law is being broken by many. But neither clubs nor organizers of private parties need to be worried about getting into trouble. In certain provinces in the south, on the other hand, police would likely stop any dancing event and fine the organizers.

The ‘Fridays for Future’ students’ movement did stage its weekly protest on Friday, in spite of the holiday. But far less participants showed up, compared to the 25,000 who joined when Greta Thunberg came to Berlin on March 29th. Speakers at the rally asked the protesters to become vegans.

Berlin’s Governing Mayor Michael Müller said the city would be a good place during the Easter holidays, with a large number of events. “The green Berlin” was “highly attractive”, he assured residents and visitors who were already in the city. Müller wished everyone “diversified, reflective, informative, lively and quiet hours in our city.”

The Mayor also wished a nice Easter holiday to “everyone who observes it as a religious celebration.” He forgot to mention Passover, but not to thank “those who make sure Berlin continues to function”, including security personnel, fire fighters and hospital staff.

In the meantime, Easter bonfires had to be forbidden this weekend in the Brandenburg province because the warm weather increased the danger of forest fires. In the Gatow district, fire fighters were already busy extinguishing flames in a forest. But in Berlin there were no limits in this regard.

There were limits on the Autobahn in Brandenburg though. Due to the holiday, several freeways around Berlin and elsewhere in Germany filled up quickly. Police blocked two stretches on Autobahn no. 13 from Dresden to Berlin because of accidents on Friday.

And, finally, at Berlin’s Wannsee lake, the bathing season officially began. On Friday, some Berliners actually had the courage to jump into the water, which is still extremely cold and may have shrunk some small body parts as a result. But, at the Wannsee’s sandy beach, the heroes of the day warmed those up afterwards.