Berlin’s ‘May Days’: A Fairground in the Park 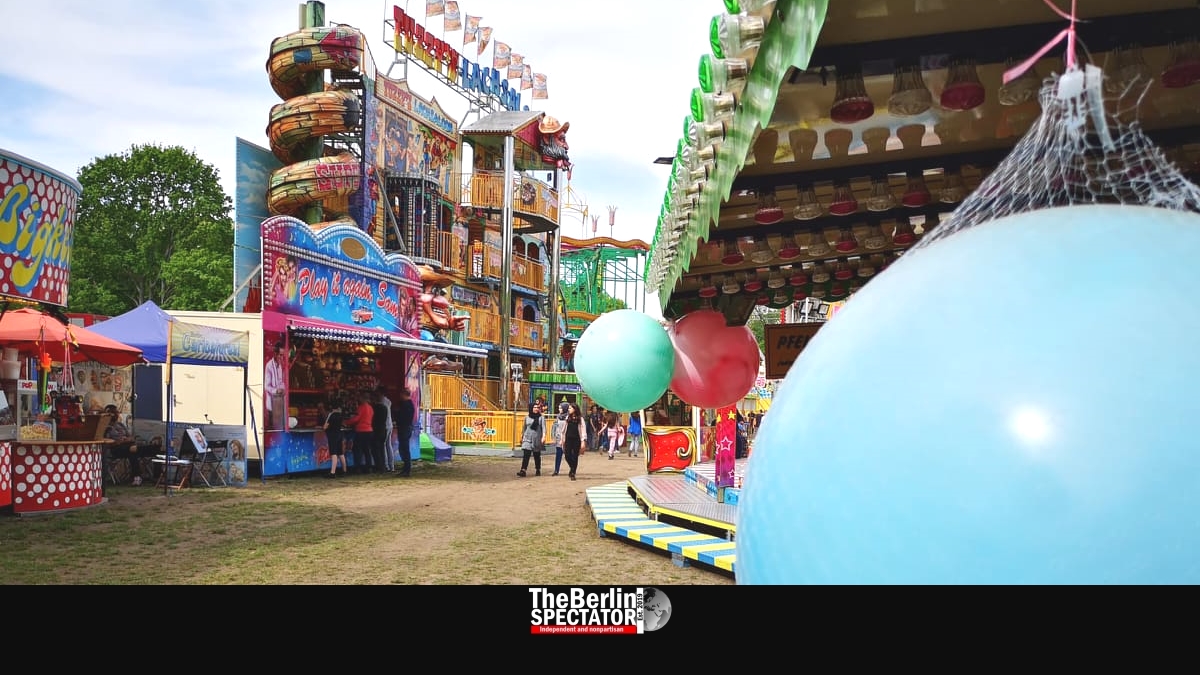 In Berlin’s Neukölln borough, the ‘Maientage’ (‘May Days’) just started, a fair located right in the big ‘Hasenheide’ park. Sunbathers, dog walkers, families with children and drug dealers who usually fill the park needed to move over to other lawns, in order to make room for the fair.

The owners of more than 70 fairground rides, food and beverage stands had started setting up their businesses, including carousels, a roller coaster, a giant wheel and other sensations, days ago. The big lawn the fair is taking place on was protected with a thick layer of sand first, which turned the whole thing into a dusty and partially muddy spot, but nobody seemed to care about dirty shoes.

One big white-water ride, located at the northern end of the fair, was still being set up by a dozen men with huge cranes on Friday. It was not ready for the first day of all the fun, because it was just transported to Berlin from Hamburg, where it had been part of the ‘Hamburger Dom’, the largest fun fair in Germany.

Some fairground fairground people came to the ‘May Days’ for the first time, including a Dutch man from the town of Apeldoorn who owns some kind of a cuddly toy casino, in which kids can throw coins into glass boxes for a chance to win a teddy bear. The owner said he did not have any expectations, since he had not been to Berlin before.

A fast ride called Break Dance was very popular from the minute the fair officially opened at 3 p.m. today. Some 15 teenagers were on site for the very first round. They screamed while their gondolas turned in several ways quite fast. The owner of this ride, a tall 120-kilo guy (265 pounds), definitely played the best music on the premises. It was funky stuff recorded in the late 1970s.

One guy with an expensive Nikon camera said he was taking pictures for a large coffee table book he wanted to publish one day. “I just love fairs”, he said, while shooting the next attraction.

Between bumper car rides, tiny carousels for 2-year-olds and beer stands, sticky cotton candy was being sold, sausages of all kinds and countless kinds of sweets in all colors of the rainbow. They should have employed some dentists.

The Berlin Spectator’s reporter also found a ‘7D Cinema’. Since the owners could not be found, there was nobody who could have explained that one. Sure, a 3D movie with moving seats would be 4D. Adding smells and water drops or wind would make it 6D. But 7D? No clue.