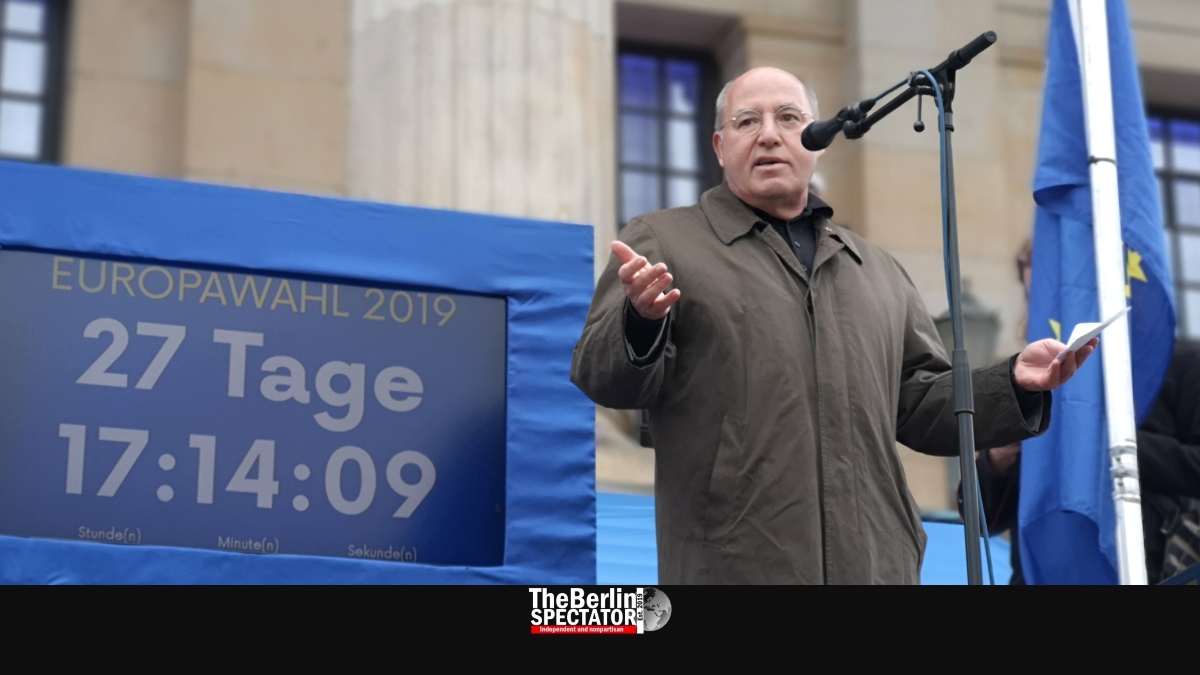 Gregor Gysi, the President of the European Left and MP for ‘The Left’ in the Berlin Bundestag, joined the weekly pro-European rally organized by the movement Pulse of Europe in Berlin today.

In front of some 1500 participants he said Europe and the European Union were in a “deep crisis”. Gysi told his listeners, there were two ways: Either everything would go down the drain, or Europe would have to choose a new start and “an actual European integration”. The latter was the way to go.

Also he asked everyone to vote. The turnout at the upcoming European elections needed to be a lot higher than last time, he stressed. “Those who do not vote will be jointly responsible for an outcome in which E.U. opponents might have the majority”, the left-wing politician and lawyer said.

Gysi is one of the more colorful figures in German politics. His supporters love his rethorical gift. They celebrate his contribution to saving the communist GDR’s ruling party SED and turning it into a relatively large Bundestag party in reunited Germany.

His foes oppose him not just politically. Many believe he was an informal agent for the GDR’s infamous State Security, something he has always denied. As a lawyer in the GDR, he was supposed to defend civil rights activists on several occasions, but seemed to defend the communist state instead.

Damian Boeselager, a co-founder of the pro-European movement Volt, said the traditional parties did not defend Europe fast or radical enough. He and his colleagues had founded the movement in order to change the way politics were done. Europe needed to be strengthened urgently, he told the participants.

Rallys organized by Pulse of Europe are being supported by the larger part of the political spectrum, including the German Christian Conservatives, the Liberals, the Social Democrats, the Greens and Gysi’s ‘The Left’. Next week, Annegret Kramp-Karrenbauer, the chairlady of Chancellor Angela Merkel’s party CDU will be there, at Berlin’s Gendarmenmarkt.

Representatives of several organizations were among the protesters, including ‘Grannies Against the Far Right’. All speakers stressed the importance of voting on May 26th, 2019. And they all verbally attacked the nationalists and other E.U. opponents.

There are 104 so-called Pulse of Europe cities in Germany alone, where regular pro-European rallies take place. The latter also applies to countless cities in 21 other E.U. countries. There are a total of 28 E.U. countries, but some do not participate.