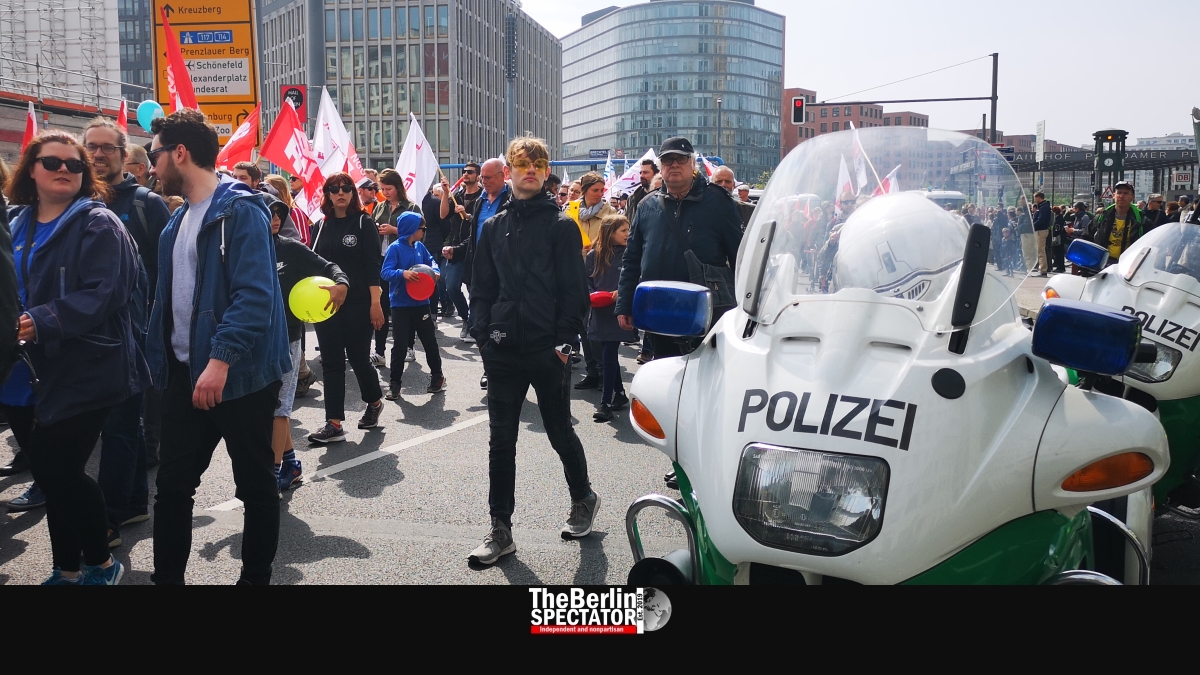 Several Labor Day protests took place in Berlin on Wednesday, May 1st. At 10:00 a.m., an estimated 13,000 people took part in a protest march organized by the German Federation of Trade Unions (DGB). At 1:00 p.m., they reached Brandenburg Gate.

There were no incidents during this march, the participants of which demanded fairness on the labor market and affordable housing. A group of union members played convincing Brazilian rhythms on several kinds of drums. Others threw confetti at the marchers and played extremely loud and aggressive ‘music’ files via giant loudspeakers on a moving truck.

Japanese tourists who were on a sightseeing trip through the center of Berlin photographed the protest from all angles. The city state’s Senator of the Interior, Andreas Geisel, was on the street, checking on his police colleagues. He seemed happy with the day up until that moment. The same applied to representatives of unions and parties such as the SPD and ‘The Left’.

The Berlin Police Directorate had a contact officer on site, who walked with the protesters. “This protest does not lead to problems. It never does”, she said. “If there is any issue with violence, it will happen at that rally in Friedrichshain.”

She was referring to the ‘Revolutionary May 1st Rally’, which is scheduled to commence at 6:00 p.m. at Berlin’s Wismar Square. That one was not registered. The Police Directorate expects radical left-wingers to take part, some of whom might feel the inner need to turn violent. Berlin has a history of violent protests on May 1st.

Yet another protest took place in Pankow. The participants, which included political groups and parties, wanted to stop an outdoor party organized by the radical right-wing ‘Alternative für Deutschland’ (AfD). Police were busy keeping the AfD radicals and the anti-AfD protests apart.

In Berlin’s Neukölln quarter, the radical left-wing youth organization ‘Jugendwiderstand’ (‘Youth Resistance’) organized its protest in the early afternoon. That one was flanked by police forces too. At a rally at ‘Hermannplatz‘, a speaker said the “Yankees” had to “get out of Venezuela”. The ‘Resistance’, which is also known for antisemitic rants, supports the dictator in Caracas.

In preparation for this day, the Berlin Police Directorate had requested help from other federal states. A total of 5,500 officers are on duty today. This morning’s DGB protest was protected by law enforcement people from Stuttgart as well. One of them said they had left the southern German town yesterday, in order to reach Berlin on time.

In the meantime, thousands of Berliners ate, drank and enjoyed themselves at a family festival on Straße des 17 Juni behind Brandenburg Gate. Vendors sold garlic bread, steaks in bread rolls, sausages and drinks of all kinds. The DGB and small political groups, including die-hard communists, offered information and discussions at countless stands along the street.