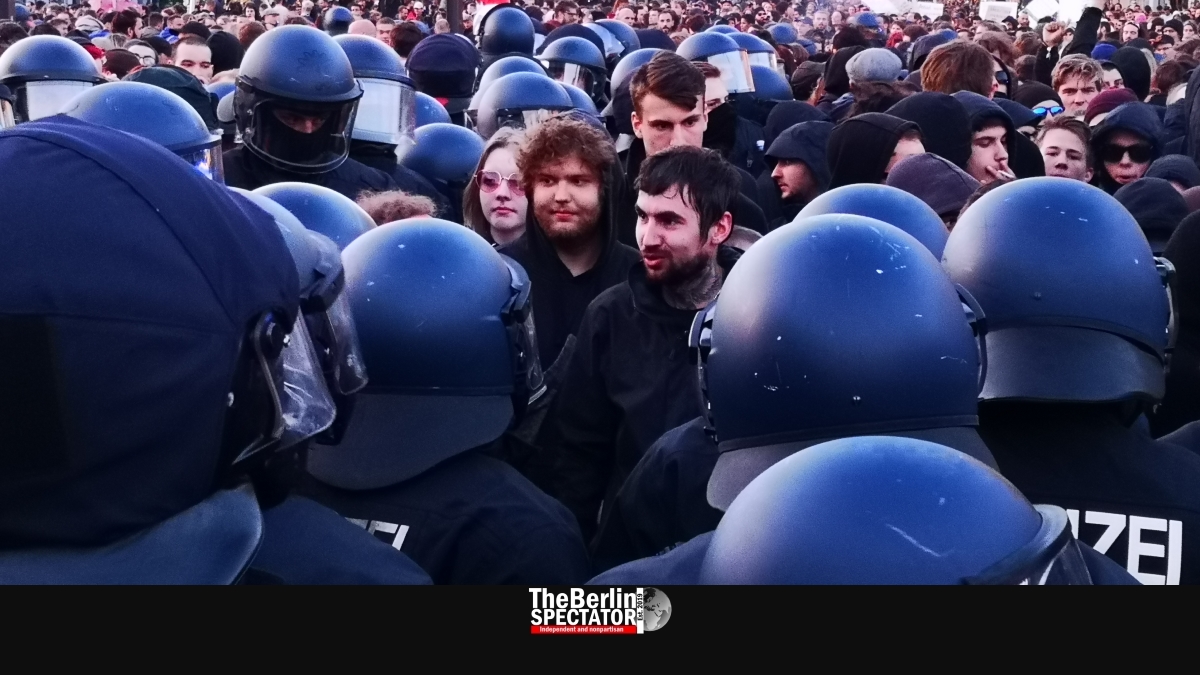 As usual, countless protest marches and rallies took place in Berlin on Labor Day, which is May 1st in Europe. While most demonstrations were peaceful, there were some incidents at the ‘Revolutionary May 1st Rally’. Police arrested several participants who threw bottles at them or committed other crimes.

Most of those incidents took place at a big intersection in Berlin’s ‘Warschauer Strasse‘, where the protest march was supposed to end. But many protesters obviously wanted to turn the event into a violent chaos. They stared at the officers on site and shouted “All of Berlin hates the police!”.

Once bottles hit police forces, some ten officers in riot gear made their way into the crowd, grabbed the perpetrators and pulled them out one by one. Then several policemen wrestled those individuals to the ground, put handcuffs on them, and took them away.

In one case, a police officer kicked an arrested man who was already on the ground. The Berlin Spectator recorded that scene on video (see video in this article) and has asked the Police Directorate to comment. On Thursday morning, the police press office told this publication the officer was suspected of assault on duty and investigated for that reason.

But all in all, police were very tolerant, considering the protest was not registered, which is against the law in Berlin. Through loudspeakers, police contact teams asked the organizers to approach and talk to them about the protest march route. Nobody did.

During the protest march, firecrackers were lit in the crowd, which is also against the law. Most protesters were mummed, which again is against the law. And police were constantly provoked.

This last protest of the day was against “the city of the rich” and Berlin’s housing crisis, which actually exists. But during the march, protesters shouted “End fascism!”, even though there has not been fascism in Germany since 1945.

And they constantly verbally attacked the police, the same police which protected their right to protest, even though the radicals broke the law in several ways. Of course the officers also protected the city from protesters who wanted to turn the rally into a violent one.

Most of the time, the overwhelming police force flanked the protest march from all sides. Towards the end, on ‘Warschauer Strasse’, some participants managed to break out of the march. Officers ran after them. All side streets on the route were blocked, in order to make sure the situation would remain under control.

Many participants urinated on a cemetery located on the route, and they did so right next to its little chapel. Some protesters were intoxicated or stoned. The smell of marijuana was everywhere. Few were heard chanting antisemitic rants which contained the words “Auschwitz” and “spilled blood”.

Because the Police Directorate’s operational command did not receive any route from the organizers, and due to provocations from the start, police commanders decided to have the entire event filmed from the ground and from a helicopter which followed the march at all times. Protesters who committed crimes might be identified on the footage and arrested later.

In the late evening Police Chief Barbara Slowik said the Police Directorate’s strategy had been successful. She called the ‘Revolutionary’ protest “widely peaceful”. Also she and Berlin’s Senator of the Interior, Andreas Geisel, thanked all officers on site.

A total of 5500 policemen and policewomen were on duty in Berlin on Wednesday. Some even came from southern Germany, in order to support the Berlin Police Directorate.

On Thursday morning, they said that more than 100 people had been arrested and 30 injured.

Berlin has a long history of violent May 1st protests. Last year, Labor Day was peaceful.