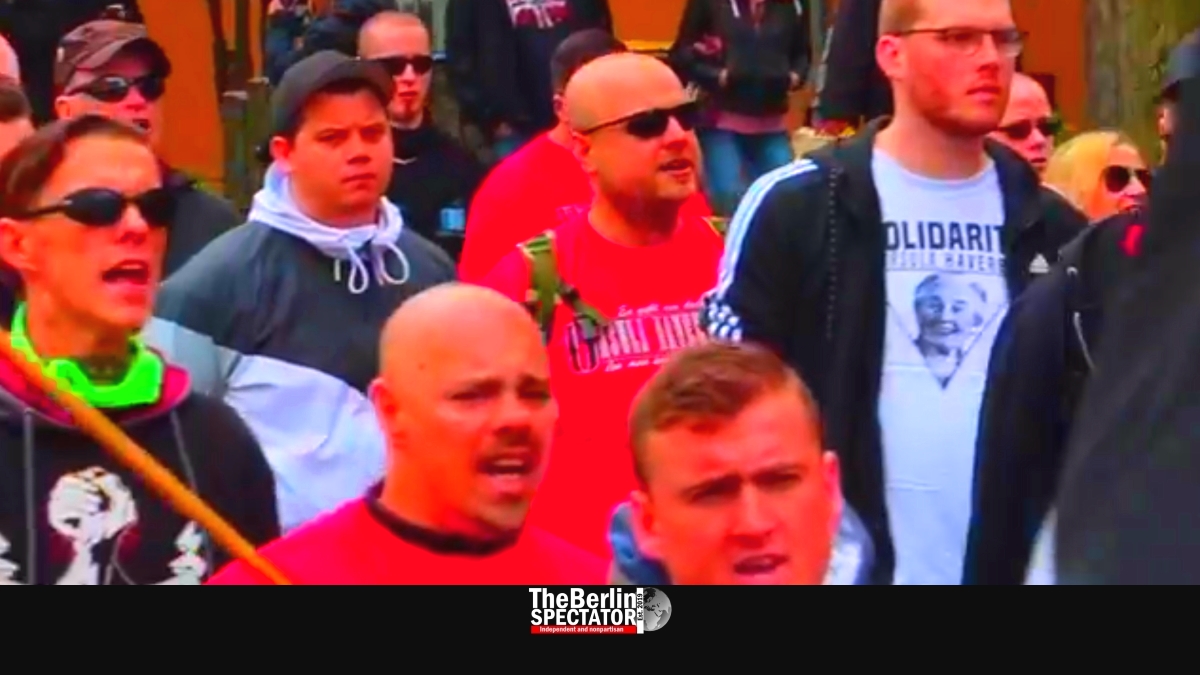 While most of German news community, including The Berlin Spectator, was busy covering more traditional Labor Day protest rallies, including some organized by the radical left, some 200 Nazis took to the streets of Duisburg on Wednesday.

It was not just any Nazi march. Participants actually said what they think. Instead of beating around the bush, as they often do, they admitted they were “Hitler people”. The event was organized by ‘Die Rechte’, a radical right party, and observed by the Berlin-based ‘Jewish Forum for Democracy and Against Antisemitism’.

Some 200 Nazis took part in the march, the organization reported. Manfred Breidbach, a dangerous individual, was one of the speakers. He said the “internationalist kraken, which stands behind everything” needed to be fought. His listeners applauded after his final statement: “In our hearts, we were Hitler people back then, and we are today.”

He also talked about “parasites” the name of whom did not have to be used “because everyone knows whom this is about.” Under the original Nazis, the word ‘parasites’ was a euphemism for Jews. This aspect has not changed. Breidbach also quoted the lyrics of a Nazi song which say grenades needed to be thrown into the parliaments.

With this hate-filled talk, which openly targeted Jews and democracy, hate speech has reached a new quality again in Germany. It is unclear whether Breidbach will be sued by anyone, for incitement.

But the reporting and a video published by the Jewish Forum shows he was not the only one who would have made Goebbels proud. Others shouted they wanted to give it all “for the people, the race, the nation!” And they attacked their favorite object of hate, the Jews, by chanting “Israel: Never Again!”.

While participants of this rally by ‘Die Rechte’ openly said National Socialism was a movement they were “connected to in our spirit”, the party’s website does not say so. Neither does it say its members were “Hitler people”. The word parasite is not being used either. The obvious strategy is to use direct Nazi language at rallies, and to sound a little more moderate online.

Speakers also said they would get Ursula Haverbeck out of prison on May 26th, which is the date of the European election. The 90-year-old has been convicted of denying the Holocaust several times. A year ago, she was arrested and put behind bars. Haverbeck is serving a two-year sentence.

In Duisburg, several organizations and parties protested against this latest Nazi march. They also tried to prevent it beforehand. But according to the Jewish Forum the Nazis did hear a loud anti-fascist protest which took place in the same city.

The Berlin-based Israeli activist Smadar Pery said, it was unbelievable that using slogans like “Israel is our Disaster” was allowed. The original Nazis used the slogan “Jews are our Disaster”, while ‘Die Rechte’ replaced the word Jews by the word Israel.

“It is also scandalous that rallies of the extreme right or the antisemitic ‘Al Quds Day’ protest actually take place”, Pery said. The next ‘Al Quds Day’ rally is scheduled to take place on ‘Kurfürsten Damm‘, one of Berlin’s most famous shopping streets, on June 1st.

Cooperation between antisemitic Muslims and German Nazis or other native Jew haters is a phenomenon which has been observed several times in the past few years.