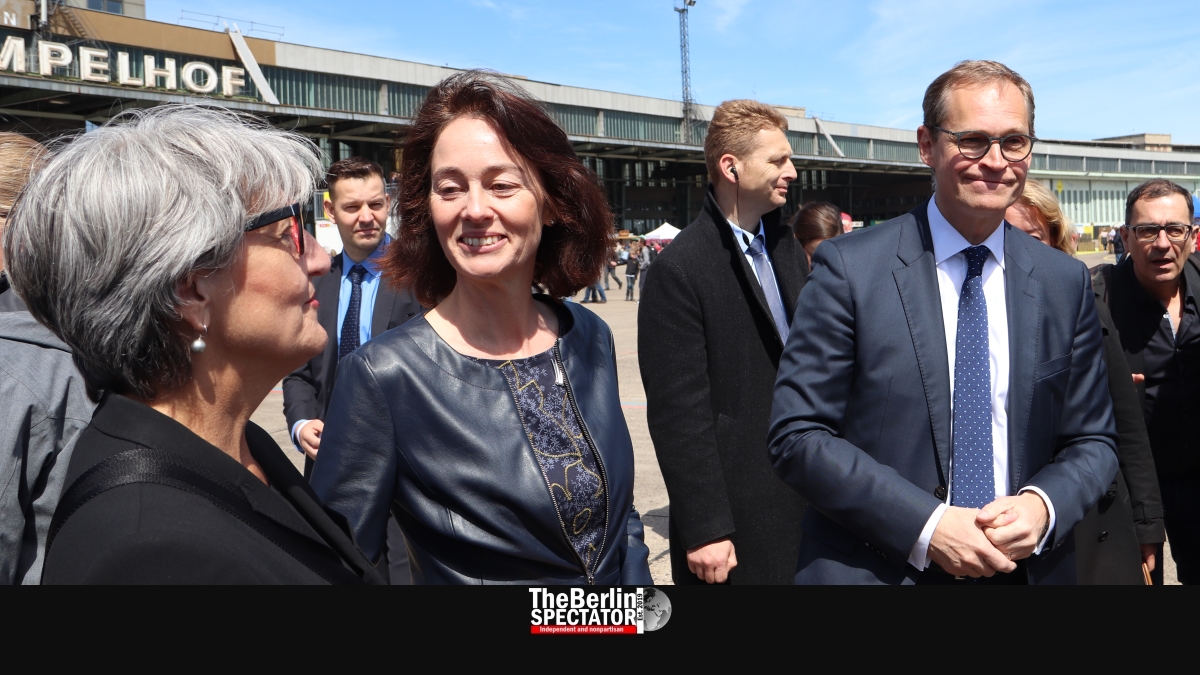 Seventy years ago today, the Berlin Blockade ended. The only reason 2.1 million West Berliners survived was the Berlin Airlift, organized and flown by the American Air Force, the British Royal Air Force, the French and other countries. They flew back and forth between Western Germany and West Berlin, in order to feed an entire city in a nation which had been defeated, along with its fascism and genocide, three years earlier.

Today, Berliners and Airlift heroes came to Tempelhof Airport, where ‘Candy Bombers’ or ‘Raisin Bombers’ used to land. This airfield, which was the reloading point for food and other goods badly needed in West Berlin seven decades ago, became the location for a huge anniversary celebration on Sunday.

Gail Halvorsen was on site back then, as a U.S. Air Force fighter pilot who dropped loads of chocolates for the kids of West Berlin. And he was welcomed today. A baseball field, one of the few in Berlin, located at Tempelhof’s former airfield, was named after him this morning.

Halvorsen is 98 years old. He was accompanied to Berlin by his two daughters. Without him and other dedicated pilots and helpers, the ramifications of the Berlin Blockade would have been catastrophic.

In his old uniform, Gail Halvorsen took the JFK approach today when he said it was “good to be home”. The old man from Utah is a Berliner too, in several ways. He and his colleagues flew as many as 278,000 flights to West Berlin. On the ground, mostly at Tempelhof Airport, 19,000 residents helped unloading and distributing the food, the coal and everything else the pilots brought.

An official anniversary event took place at the Airlift Monument in front of the terminal on Sunday morning. Berlin’s Governing Mayor Michael Müller told the participants the Airlift had shown that together, big challenges could be overcome. Müller is a member of the Social Democratic Party (SPD).

His party colleague Katarina Barley, who is both Germany’s Minister of Justice and the SPD’s top candidate for the upcoming European elections, said with the Airlift, the impossible had become possible. Solidarity had made the miracle happen.

Minister Barley joined Mayor Müller on stage at the actual festivities later, before she rushed off towards the city center, where she was scheduled to speak at the weekly pro-European rally organized by ‘Pulse for Europe’. But the two politicians took the time to board the only ‘Raisin Bomber’ on site, and to look at several stands at the festivities.

A total of seven Berlin Airlift veterans were among the guests. So were Berlin’s former Mayors Klaus Wowereit and Eberhard Diepgen. On the day of the 50th Airlift anniversary in 1999, Diepgen had thanked America in a speech at the National Air and Space Museum in Washington D.C..

The Berlin government was angered by the fact that U.S. Ambassador Richard Grenell did not show up today, according to German-language news publications. Instead, the U.S. representative Robin S. Quinville took part. But Ambassador Grenell did go to a concert on Saturday which was part of the official Airlift anniversary festivities too.

At the big happening at Tempelhof Airport, thousands of Berliners and tourists listened to marches played by a German army orchestra. They looked at video installations and exhibitions about the Airlift, including an original Berlin living room set up the way they looked like 70 years ago. Organizations such as ‘Care’, which used to be involved in the Airlift, had stands on the airfield.

Yet another star was welcomed for the celebration on Sunday, namely the Sun. In spite of bad weather forecasts, it provided light and warmth for everyone in Tempelhof.

The Berlin Perspective: ‘Guess what Happened at the Airport the Other Day.’