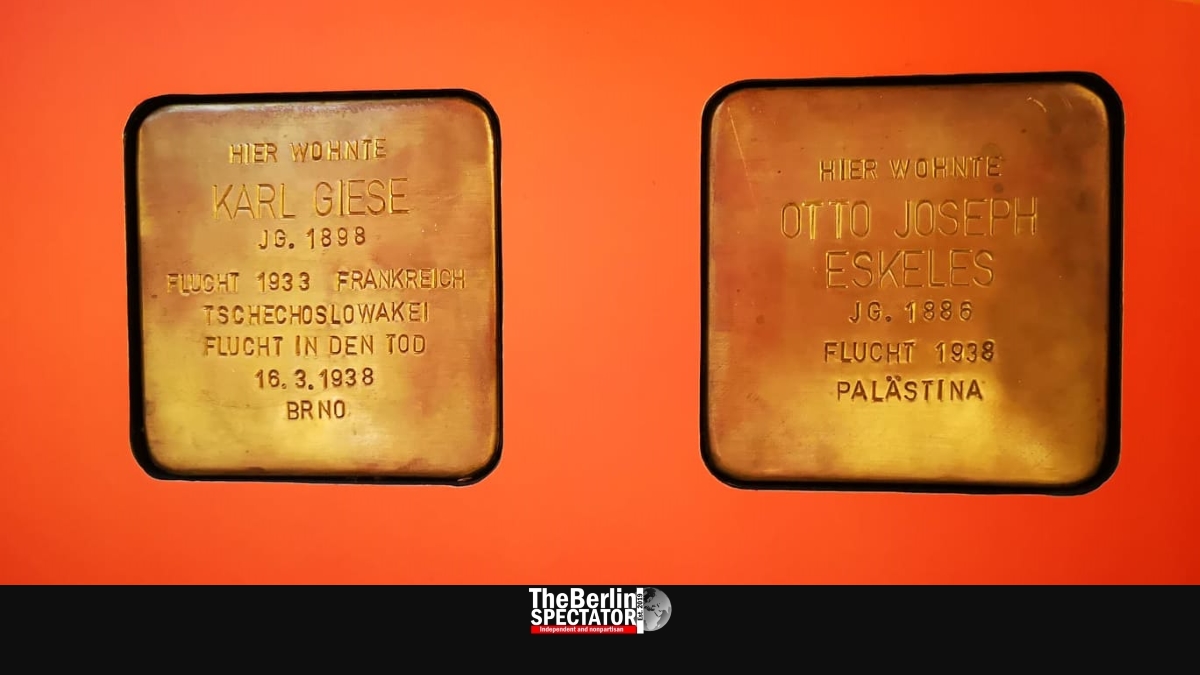 Ralf Wieland, the President of the Berlin House of Representatives, invited guests for the inauguration of a special exhibition about the so-called Stumbling Stones which can be found all over the place.

The stones, ‘Stolpersteine‘ in German, are actually blocks made out of brass. They commemorate people who were persecuted by the Nazis between 1933 and 1945, including Jews, Gypsies, homosexuals, Jehova’s Witnesses and other victims many of whom were murdered in death camps.

More than 20 years after the first Stumbling Stones were installed in Berlin, there are now 8000 of them in the city and more than 72,000 in Europe. The exhibition entitled ‘Stumbling Stones – Remembrance and Social Structure’ at the Berlin House of Representatives is now open to visitors.

It shows aspects about the Stumbling Stones which most people are not aware of. The European art and remembrance project includes those who are contributing to it, as well as people on the street who look at the decentralized installation. Therefore the project as a whole is a “Social Sculpture”, according to those involved.

“The purpose of the exhibition is to show Berliners what is behind this idea”, Ralf Wieland told The Berlin Spectator. Residents might feel or see the Stumbling Stones without perceiving what they really are, he said. The exhibition was about raising awareness.

“I hope visitors of this exhibition will walk the streets with more sensitivity and attentiveness afterwards”, President Wieland stated. When they spotted one of the stones, he wanted them to know what they stood for.

At the inauguration, Dr. Christoph Kreutzmüller, a historian and chairman of the ‘Active Museum Fascism and Resistance in Berlin’, explained how much work needs to be done to add just one Stumbling Stone. He said several archives needed to be checked and a lot more research was necessary by phone.

According to Kreutzmüller, the research done for the Stumbling Stones project has lead to knowledge not available before, for instance about so-called ‘Jew Houses’, in which Holocaust victims were held before they were deported to Nazi Germany’s death camps. He said more research had to be done in this regard.

Gisela Morel-Tiemann from the ‘Stumbling Stones Initiative’ in Berlin’s Charlottenburg borough said it was important to oppose those who downplayed this part of Germany’s history, those who called it a “bird dropping” (which is what a high-ranking member of the radical right-wing party AfD recently did) and those who denied the Holocaust ever happened.

The small exhibition ‘Stumbling Stones – Remembrance and Social Structure’ can be visited at ‘Wandelhalle’, inside the Berlin House of Representatives, Mondays to Fridays from 9:00 a.m. to 6 p.m., until it ends on Friday, June 7th.