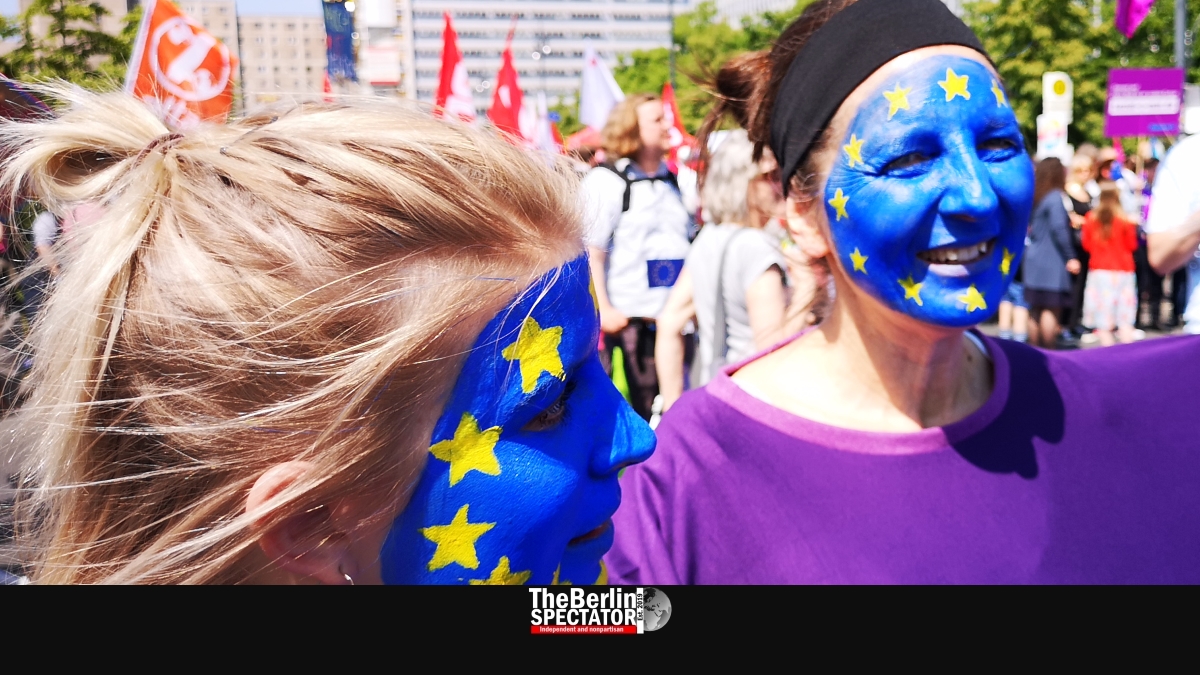 In Berlin, more than 10,000 people took part in a protest against nationalist movements in Europe. At Alexanderplatz, the square which used to be in the very center of East Berlin before Germany’s reunification, many parties and groups were represented.

They included the Social Democrats (SPD), ‘The Left’, the Verdi union, a group called “Grandmas Against Right-Wingers”, but also more ‘exotic’ communist groups, including the Marxists-Leninists’ (MLPD) and the Germany Communist Party (DKP).

Several parties and other co-organizers had their own vans with microphones. When the rally started, there was some kind of a sound competition. Organizations tried to outperform each other by turning up the volume.

But most participants of today’s protest agreed on two aspects:

“The elections on May 26th will help decide the future of the European Union”, the organizers said. “Nationalists and right-wing extremists want to use them to herald the end of the E.U. and bring back widespread nationalism. Their goal is to bring far more MEPs into the European Parliament than ever before. We are all called upon to stop the tide of nationalism!”

They also said Europe should guarantee safe escape routes for asylum seekers, rather than fortifying its borders, and “listen to the voices of its citizens”. They called for a “more democratic” Europe in one of their statements.

In addition they were advocating gender justice, freedom of art, culture and press and social justice. Solidarity, workers rights, a right to education, housing and medical care were among the demands too.

The organizers had registered the protest for 50,000 people. But in spite of nice weather in Berlin only a fraction showed up.

In other German cities, including Cologne, Hamburg, Leipzig and Munich, similar protests took place, one week ahead of the European elections.

Hundreds of police officers, both from the Federal Police and from the Berlin Police Directorate, were on site.

In the past weeks and months, a movement called ‘Pulse of Europe’ had organized numerous pro-European rallies at Berlin’s Gendarmenmarkt on a regular basis. All speakers from parties across the political spectrum had stressed the necessity to vote and to stop right-wing populists.

Kreuzberg: The Melting Pot in the Heart of Berlin