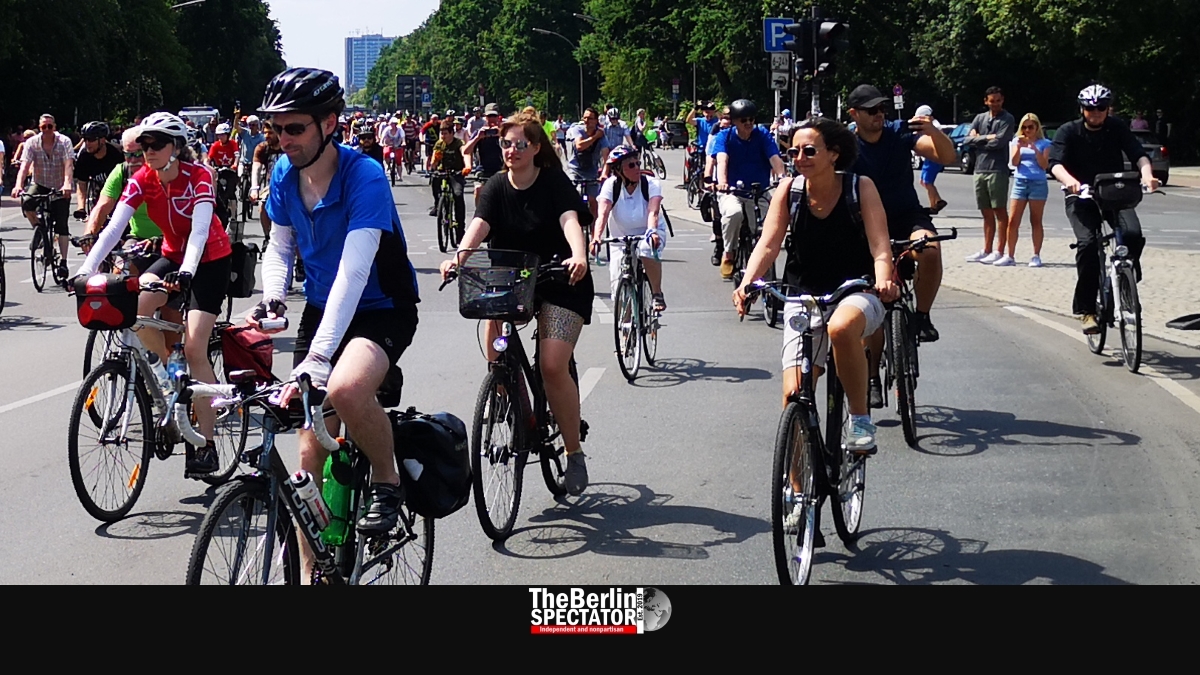 Tens of thousands of bicyclists arrived at Berlin’s Victory Column in the large ‘Tiergarten’ park this afternoon. They came from all directions. Many of them covered more than 40 kilometers (25 miles) when they came in from Brandenburg province, others just joined the rally in Berlin.

The purpose of the event organized by the Association of German Bicyclists (ADFC) was demanding more room and a new traffic policy. Indeed, the number of inhabitants and cars in Berlin is constantly growing. The authorities are having trouble keeping up with the growth while the implementation of their partially good ideas takes too long, according to some.

Up to 90,000 bicyclists took part in the protest, according to the organizers, but the Berlin Police Directorate believes less than a third actually joined. In sunny weather and at 32 degrees Centigrade (90 degrees Fahrenheit), most protesters on wheels were sweating a lot when they reached ‘Tiergarten’.

There were 19 official cycling routes to the meeting point. Police even blocked parts of Berlin’s city freeways to car traffic in order to let bicyclists use those roads. Even highways in Brandenburg were reserved for cyclists only on Sunday.

Some participants came all the way from Leipzig. In order to get to Berlin on time, they cycled through the night.

The annual bicycle protest commenced in 1977, shortly after the oil crisis shocked Western Europeans. Since, a lot has happened. Recently, bicycle traffic in Berlin has been growing a lot faster than the infrastructure could be modernized and extended.

The three-way left-wing coalition governing the city state of Berlin is working on improvements. This year, the authorities started installing wide, protected and green bike lanes which are supposed to make cycling a lot safer.

In Berlin, the modernization of the city’s bike lane system is something the boroughs are responsible for. Some, such as Kreuzberg, are acting rather quickly, while others are not. The Berlin Senate’s intends to ban cars from parts of the city center, in order to give more space to pedestrians and bicyclists.

Today’s big event impeded car traffic a lot. Residents waited for city buses for up to an hour. Street traffic came to a complete standstill in several areas. Ahead of the bicyclists’ rally, the authorities had asked people to use public transportation instead of cars.

At least rally participants were not impeded at all. Bicycle enthusiasts of all ages took part in the protest.