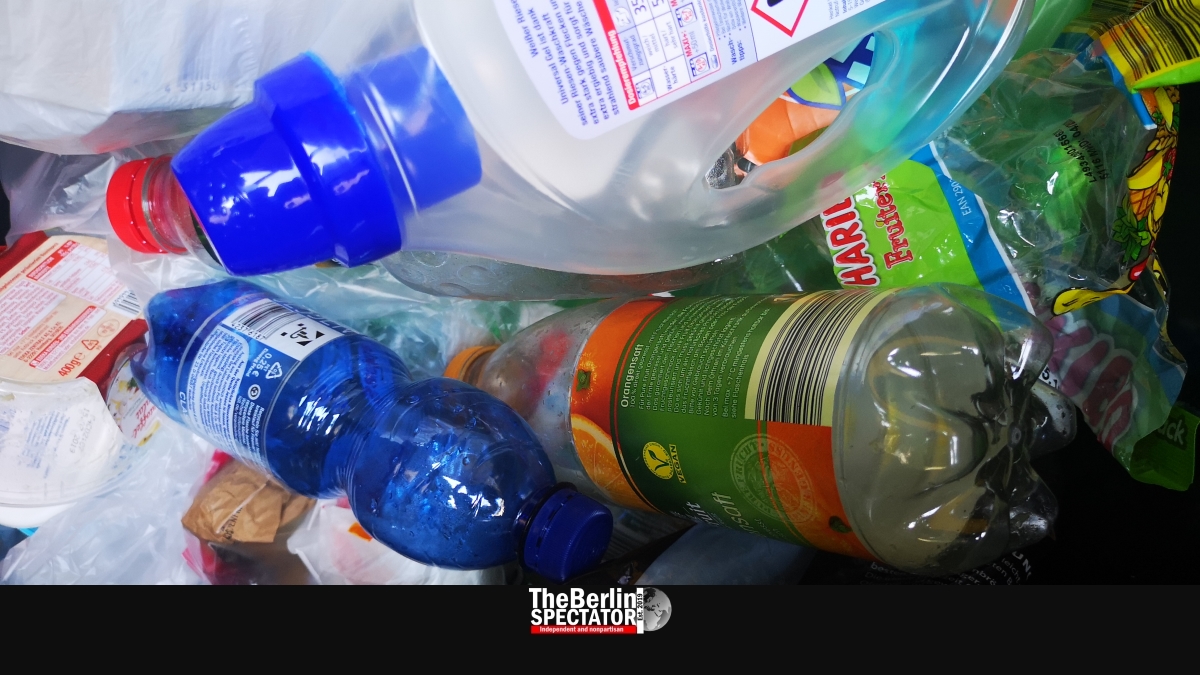 Life is nice. Purchasing plastic forks in a plastic bag for the big weekend barbecue is easy. The pork steaks come in plastic packaging. What if anyone wants fruit? An apple a day will keep the doctor away. The six apples we purchase are wrapped in plastic.

The cooled beer and Coke bottles for the event are made of plastic. So are the bags we use to transport all of that stuff to the park. Two plastic bags are full of plastic bottles, one contains the plastic bag with the plastic forks and the apples in their plastic wraps, and a third one the pork.

Yes, I know what you want to say. Too much plastic, right? Wrong. This is Germany. Everything I am using will be recycled and turned into new plastic bags or new bottles. No, my plastic will not end up in the Atlantic Ocean because my country is so advanced.

Every German household has a million trash barrels. One for glass, one for compost, one for paper and one for plastic. Within days, they will pick up the plastic in order to take it to some recycling place. The empty bottles will be cleaned and reused. Ain’t life grand?

Well, no. The environmental organization BUND and the Heinrich Böll Foundation have just released their ‘Plastic Atlas 2019’ and what it says in the document is not pleasant at all. It contains lots of bad news, including this one: Germany recycles only a fraction of its plastic trash. To be precise: 16 percent of it is being converted into new products.

Only a few years ago we found out how dangerous plastic really is. As recently as May 1st, 2019, plastic trash was found in Challenger Deep, the deepest point in the Pacific Ocean. It is being found in the stomachs of dead whales, fish and sea birds. Our plastic bags are killing animals. And they will be killing us if we do not change things.

After World War II, PVC and other plastics started spreading. In the 1950s, people still saw plastic as something precious which they kept. Then everything was wrapped in plastic. Half the products made out of the material will end up as trash after less than a month.

The food industry plays a bad role in this regard. Absolutely everything is being shipped out and sold in plastic wrapping. That way it becomes part of the nourishment cycle. In plain English: We eat plastic. We have traces in our stomachs and even in our blood.

Clothing made out of synthetic fiber causes problems too. These products do not only jeopardize our health, but because they have become disposable, they have become a danger to the environment too, by contributing to climate change.

Some of the Western world’s plastic trash was being exported to China and Malaysia. But those countries have understood the scope of the problem as well and are not accepting it anymore. Therefore Germany, the third-largest plastic trash exporter on the planet, is confronted with yet another problem.

According to the ‘Plastic Atlas’, many initiatives with the purpose of dealing with the issue are not really helping. In fact, they are trying to work on the recycling aspect only, instead of fighting the plastic producers. And they do not seem to be interconnected or organized well, which is why those NGOs seem to be working ineffectively.

So, the actual recycling rate in a country organized as well as Germany, with its never ending list of rules and millions of plastic trash barrels, is a ridiculous 16 percent. In the entire world, the rate is below 10 percent.

One of the many issues is the fact that the industry does not really like recycling material considered inferior. Those responsible prefer purchasing new plastic offered at extremely low prices, meaning recycling does not seem to be profitable.

Since 1950, far more than 8 billion tons of plastic have been produced, or about one ton per today’s inhabitant. One of the biggest plastic producers is the Coca Cola Company, which sells 88 billion one-way bottles per year.

The ‘Plastic Atlas’ contains demands to leading politicians in the world. They are supposed to restrict energy and chemistry corporations. According to the authors of the study, a few dozen corporations in the world produce a large part of the products which end up as plastic trash. Those include ExxonMobil and BASF.

While the study praises the European Union for its approach regarding plastic trash and recycling, it says a lot more needed to be done to reverse the dangerous developments.