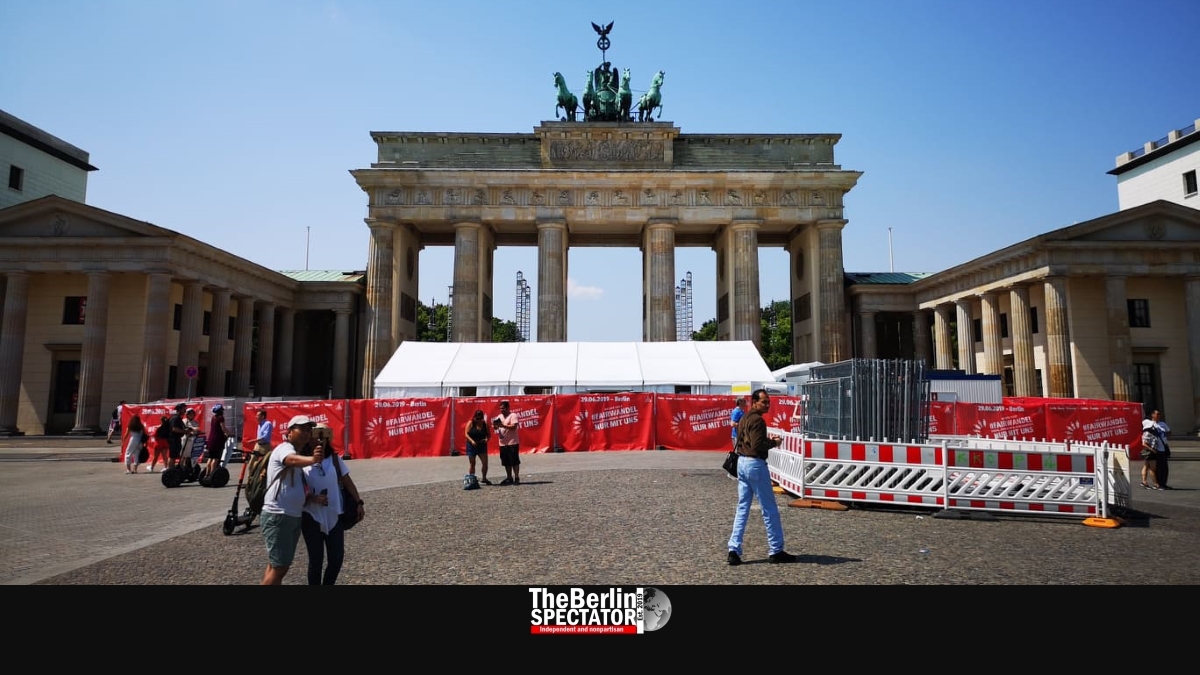 Hell broke loose in Berlin on Wednesday, when temperatures climbed to around 100 degrees Fahrenheit (38 degrees Centigrade) in the afternoon. But the heat started rather early.

At 7:00 a.m., the warmth which came through the city’s open windows was already too much. Two hours later, Berlin felt like Phoenix, by noon it felt like Bangkok, and what it felt like in the afternoon defies description.

One thing is certain: This kind of weather was difficult to deal with for humans, animals and plants. Even objects freaked out, e.g. when a false fire alarm hit a shopping center because of a fried circuit board. The fire fighters came in full gear. Nobody seemed to have told them it was hot.

Some humans did not have time for that kind of luxury. At ‘Sonnenallee’, the owner of a Kebab stand told The Berlin Spectator he had to work in temperatures of up to 175 degrees Fahrenheit (80 degrees Centigrade) because his two Kebab machines and the French fries fryer heated up the hot air even more. But at 11:40 a.m., that man still looked surprisingly fresh when he smoked a cigarette in front of his business.

A few minutes later, a beggar was sitting in front of one of the entrances to the Karstadt department store at ‘Hermannplatz’ square, right in the sun. He did not complain. His 14-year-old doggy was allowed to rest in the store’s entrance today, where the A/C had recently been repaired. The four-legged beauty seemed fine, since it also had a bowl with water.

At 11:56 a.m., a bus on line M41 raced towards Berlin’s central station, with its A/C running at full throttle. The passengers on board seemed reluctant to leave the bus when it reached their stop. They just loved the relatively cool air so much, including many toddlers in strollers.

At 12:25 p.m., a kind gentleman from the United States was taking a break in the shade, right next to the Memorial to the Murdered Jews of Europe in the center of Berlin. He told this publication he knew how to deal with heat since he was from the state of Louisiana. Actually, he carried a plastic bag with a bottle of ice water.

Two guards at the American Embassy, located next to Brandenburg Gate, seemed to be fine with the heat as well. Two large sun umbrellas protected them. One of the guards, a man from Pennsylvania, said he was not really used to this much heat. Neither was his German colleague.

Because of an event later this month, Brandenburg Gate was not a good photo object today. The organizers had already put up fences and ads. Still dozens of tourists from the U.S., Latin America and the Middle East tried their best at shooting selfies from all angles, at 98 degrees Fahrenheit (37 degrees Centigrade).

At the same location, city guides who offer free walking tours of Berlin on a daily basis said that the exaggerated heat had decreased the number of participants. Even though the guides held sun umbrellas, they looked like were sweating like everyone else.

The temperature on the ‘S-Bahn’ train from Brandenburg Gate to ‘Alexanderplatz’ square felt like 200 degrees Fahrenheit (93 degrees Centigrade). So did the Crispy Duck menu at a Vietnamese fast food place next to Berlin’s Television Tower, for 6.10 Euro (6.93 Dollars or 5.47 Pounds) at 12:59 p.m..

In the early afternoon, the ‘Werkstatt der Kulturen’ venue ignored the heat caused by the sun and concentrated on the heat of Jazz instead. Here, the Little Big Band delivered a tribute to the late Miles Davis.

The good news: On Thursday, forecasters are expecting a significant drop of temperatures in Berlin. But on Sunday the sauna might be back.