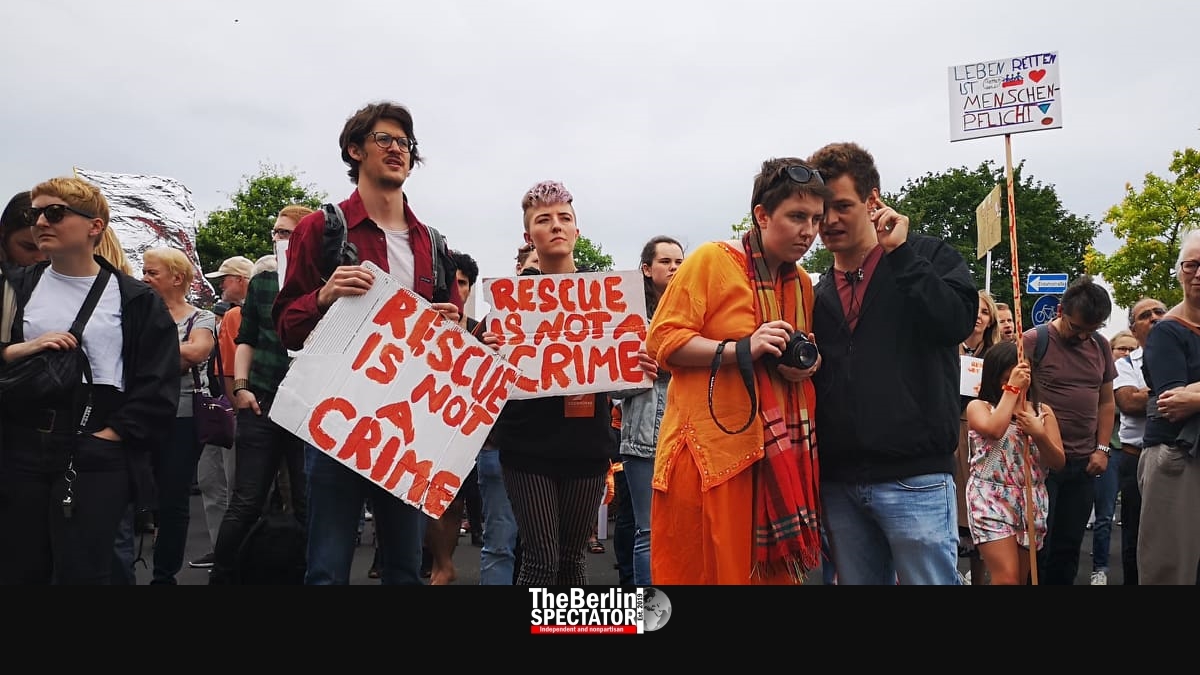 The organization ‘Seebrücke’ (Sea Bridge) has staged protests in 90 German cities and towns today. One of its main demands: For the time being, Germany should accept all refugees saved in the Mediterranean. Also the organizers called for a decriminalization of the act of saving asylum seekers at sea.

“The dying has to end”, the organizers said. A ‘safe port’ for refugees needed to be established. Participants said the arrest of the German captain Carola Rackete, who had steered a ship with refugees into the Italian port of Lampedusa a week ago, had been unacceptable.

Adam, a former asylum seeker from Sudan, was among the speakers in Berlin, where protesters gathered close to the Reichstag and the Chancellery. “Where is our humaneness?”, he asked. Others called the current policy of criminalizing rescuers inhuman and “un-European.”

Up to 8000 people took part in the Berlin rally. Police spokesman Cablitz told the Berlin Spectator, the crowd had been peaceful, as expected. In spite of this aspect, many police officers were on site, just in case. Only a few yards away, a bunch of radical “Yellow Vests” staged a protest at the same time.

The Rackete case triggered the latest protests in Germany. After her arrest, she was put under house arrest, before being freed a few days later by a judge who said the captain had done the right thing by saving the asylum seekers.

Many Europeans see her as a heroine because she saved them on the ship she was commanding, against orders she received from the Italian navy. Others accuse her of provocation, saying she should have brought the migrants to a German port instead.

In an interview with the ‘Spiegel’ weekly, Rackete herself said she had felt “abandoned by the German government”. Nobody had really wanted to help her after the arrest. She accused Germany’s Interior Minister Horst Seehofer of ignoring offers by German municipalities who had said they were ready to accept refugees from rescue vessels in the Mediterranean.

Rackete also said she would start a libel suit against Italy’s Interior Minister Salvini because he had insulted people and was responsible for incitement. The right-wing minister had played a role in Rackete’s arrest. After her release, he was furious.

In the past days, Salvini had said he expected “silence and respect” from Germany, where a number of politicians had demanded Rackete’s release. Also he had called for a “harsh punishment” for those who had “attacked Italian soldiers” and broken the law.