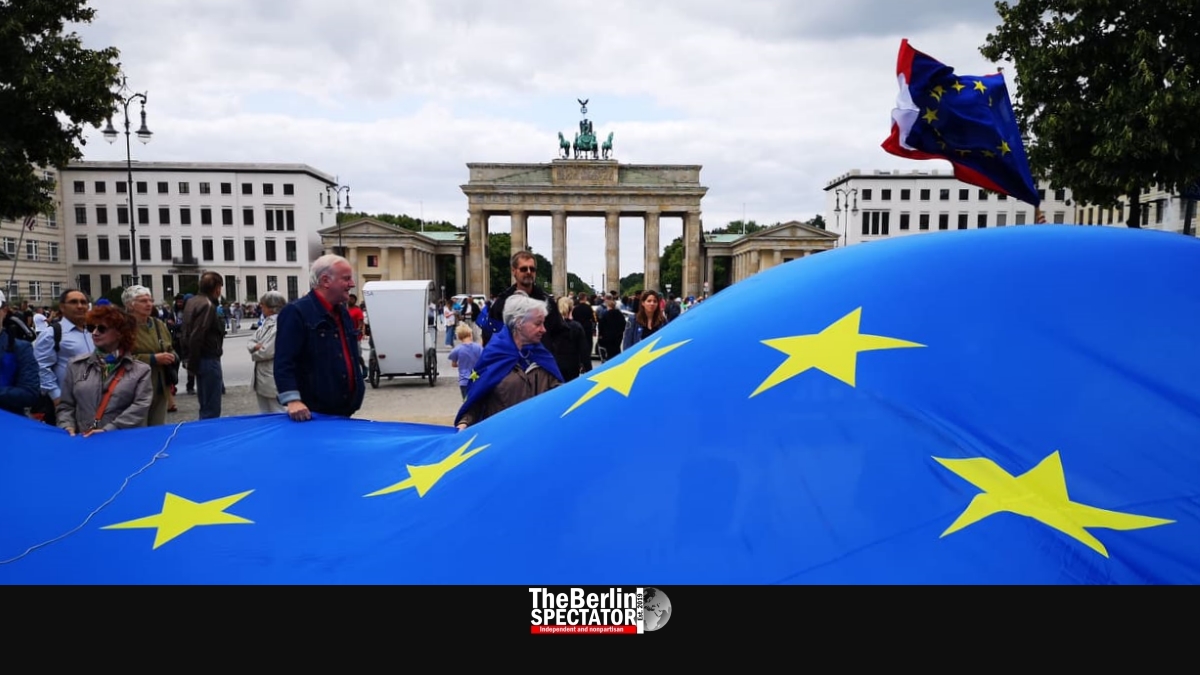 Some 40 Berliners and visitors took part in a small pro-European rally today at Brandenburg Gate, in the heart of Berlin. The gathering was organized by Pulse of Europe, an NGO which had staged regular protests before the recent European elections.

Originally, the protest was meant to criticize the way Brussels just chose new candidates for the European Union’s top posts, including Germany’s Minister of Defense Ursula von der Leyen. Some heads of government want her to become President of the European Commission, also since they disagreed with other candidates, including Manfred Weber who had been officially nominated by Chancellor Angela Merkel’s party CDU and its Bavarian sister party CSU.

But then the protest became more of a discussion forum. Some participants actually agreed with the way the E.U. heads of government brought about a consensus on the candidates for the top positions in Brussels.

Other protesters on site harshly criticized what they called “deal-making in the back room”. They demanded more transparency in the decision-making processes and regarding the choice of candidates, and said it had been hard to defend Europe before the elections. Now the heads of government had acted in an undemocratic way.

Others countered that kind of notion by saying the European voters had no way to elect the E.U.’s top personnel anyway. Because the European Parliament needed to confirm the candidates, the democratic process was working. Finding the right people for those top positions was important.

At Brandenburg Gate, the participants held a giant European flag while discussing the issue using megaphones. To some tourists, the protest seemed to be an additional sightseeing spot they could take photos of.

Yesterday, several rallies took place in Berlin. Thousands took part in a protest against the Teheran regime and its executions. Up to 8000 people participated in another gathering, at which they demanded a safe port for refugees saved in the Mediterranean. They also said Germany should accept all refugees picked up at sea.

The recent arrest of the German captain Carola Rackete in Italy had restarted the nationwide discussion about migration.