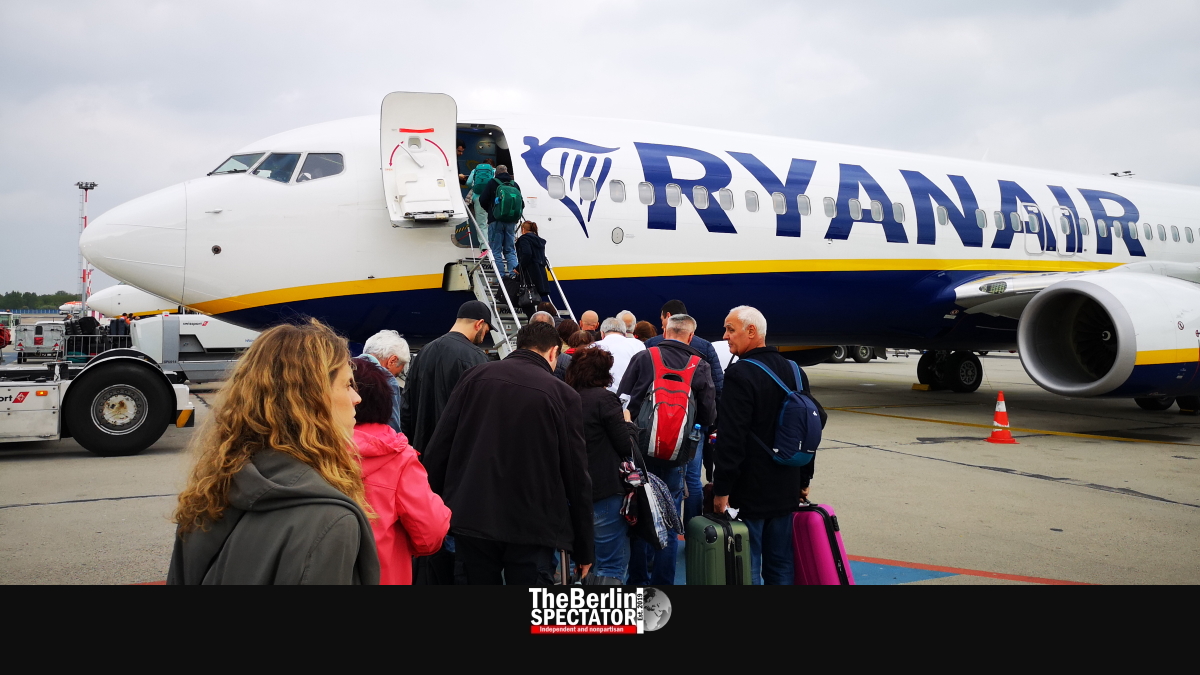 Germans love to fly. While a national discussion about the eco-friendliness of domestic flights and flying in general just started, thanks to Greta Thunberg and the student organization Fridays for Future, holiday makers and business travelers do board aircraft a lot. At Berlin’s airports, the number of flight passengers is skyrocketing.

Berlin has four major airports. Tempelhof was closed in 2008. It is now an airport for skaters, cyclists and dogs. BER has still not been opened, some eight years after the original inauguration date. But there are Tegel and Schönefeld.

The latter two latter airports just reported record numbers. For the first time ever, more than 5 million passengers either took off from or landed at one of them during Berlin’s six-week summer vacation, which is ending as we speak.

Five million, the exact number is even 5.03 million, is a lot. Especially at the beginning of the school vacations, and towards its end, both Schönefeld and Tegel were working at their limits. Airline passengers were asked to arrive as early as possible, because it was clear they would have to wait at the check-in counters and at the security control for an extremely long time.

The operational airports in Berlin are being run by Flughafengesellschaft Berlin-Brandenburg (FBB). They said the increase compared to last year’s numbers had been two percent. During the official summer vacation, Tegel managed to deal with 3.4 million passengers, in Schönefeld 1.6 million. The increase in Tegel was an impressive 10 percent.

More than 110,000 passengers per day were being processed during these last vacation days, according to FBB. But the company’s chairman Engelbert Lütke Daldrup told German-language media he was expecting even more passengers after the vacation. While Berlin ends its summer holidays, all other federal states within Germany are still vacationing.

But the new business season in Berlin will be commencing this coming week. Business travelers will be the ones increasing the numbers. The sky is literally the limit, at least in Berlin.

But there are limits, what punctuality is concerned. FBB says 75 percent of all flights in Tegel had been taking off on time during the six-week vacation, and exactly three fourths in Schönefeld. Sure, this number may be a little better than at some other major airports in Germany, but whether this kind of situation should make airports proud is a different question.

Everyone Wants to Be in Berlin

Still, there is no stopping flight passengers in Berlin, also outside the summer vacation period. FBB Chairman Lütke Daldrup says during the first half of 2019, last year’s passenger numbers had been surpassed by 2 million. For the entire year, he is expecting “at least 36.5 million”.

Because of this year’s hot summer, German unions recently started discussing the labor conditions of the ground personell at the country’s airports. Especially ramp agents, baggage handlers and anyone who works on the tarmacs had a hard time, at 100 degrees Fahrenheit (38 degrees Centigrade) or more. But in Berlin, the companies in charge hired additional people in order to be able to cope with the situation.

One thing is certain: Almost everyone wants to come to Berlin. This includes tourists from other parts of Germany and abroad. A total of 13.5 million tourists were counted in 2018, which is almost four times the number of inhabitants Berlin has. Many of those tourists fly in.

In addition, the HQs of many large German companies are located in Berlin. The city is also a good selling spot. These are aspects which make Berlin a magnet for business travelers. Let’s not forget the federal government and the Berlin Bundestag. Politicians and diplomats fly in and out of Berlin a lot. The fact that some of Germany’s ministries are still located in the old West German capital Bonn increases the number of passengers further.

At this stage, most passengers at Tegel and Schönefeld fly to Frankfurt and Munich, which are Lufthansa’s two main hubs. But German vacationers also fly to Mallorca and Antalya a lot. These are the four main destinations. If Berlin had more direct intercontinental flights, the numbers would increase to a point at which those two Berlin airports would not be able to handle the masses anymore. Neither are there direct flights to Washington D.C., nor to most other important destinations overseas.

Climate protection and Greta Thunberg’s influence have kicked in regarding the discussion about domestic flights within Germany, but the numbers have not been decreasing yet. One thing is certain: Once they do, which they will soon, especially Berlin’s airports will lose many passengers, because of its lack of intercontinental flight connections.

FBB Chairman Lütke Daldrup believes, BER Airport, which was supposed to open in 2011, will actually start working in October of 2020. Once the new one is finally operational, things will improve, also technically. The baggage handling systems, especially in Schönefeld, are very old, which is why a lot has to be done manually. That might end soon. But will BER really open that soon?