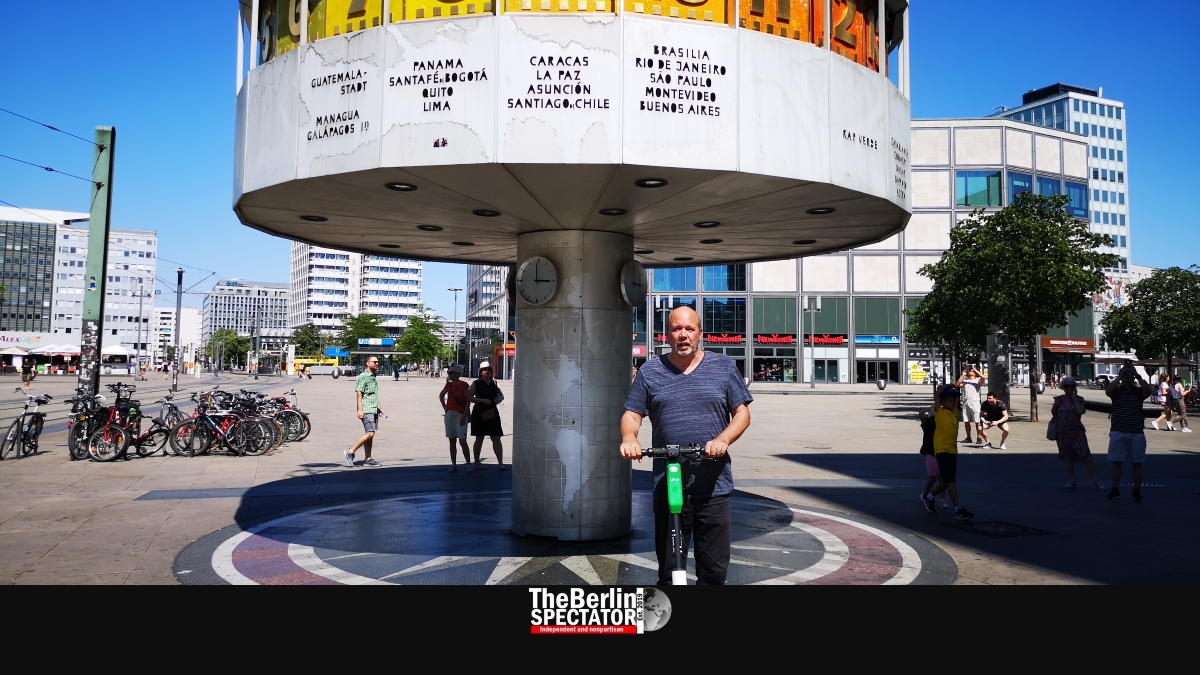 You want to experience an adventure in Berlin? Rent an e-scooter and conquer the city. But be careful. When our reporter went out there to try, he was almost sandwiched between a taxi and a bus, but he had a pretty good ride. Hold on to your hats!

Sure, it had to be the hottest day of all time. I was already sweating like a horse when I downloaded the app provided by Lime, one of the major e-scooter rentals, so that I could check the location of the nearest vehicle and rent it.

But when I got to the intersection of ‘Sonnenallee’ and ‘Fuldastrasse’, no e-strollers could be found. So it had to be ‘Warschauer Strasse’, which is where the app showed me truckloads of scooters. On the way, at ‘Hermannplatz’, I actually found two of them, but both were out of juice.

When I scanned them at 102 degrees Fahrenheit (39 degrees Centigrade) in the sun and without wearing any hat, they told me to get screwed. Just kidding. They told me these e-scooters were offline, since they needed to be charged.

The Purpose of Break Tests

Some 15 minutes later, I found what I was looking for. Six sexy e-scooters were lined up on the ‘S-Bahn’ bridge, some steps away from ‘Warschauer Strasse’ station. Wow! They looked gorgeous, all of them. The first one I tried had a charging level of 97 percent.

Guys, when you get one of those, do a brake test. These strollers have two brakes. I used both of them since I did not feel like falling on my head during a hard stop. So, off I went.

The Only Idiot on the Street

On ‘Karl-Marx-Allee’ I was pretty much the only idiot who was moving in this heat. The entire city center was almost empty. While speeding on the sidewalk, I was already guilty of an infraction. Had they caught me, they would have fined me.

I did it since the sidewalk was the only shady area and because hardly anyone was there anyway. The only people I saw up there put their behinds into the dirty water at the big fountain at ‘Strausberger Platz’. Their three dogs had a lot of fun too.

How I Lost My Virginity

But mostly I rode that scooter on bike lanes and the street, which is the rule. On cooler days, Berlin’s center is full of tourists and residents, mostly young males, who race right through hundreds of pedestrians recklessly. Stop that!

One thing I noticed on the way to the Spree river was the fact that these e-scooters are sort of sensitive. On cobble stones, they will shake you like a daiquiri. And I almost lost my virginity in a pothole. So, choosing the smoothest surface is recommended.

Museum Island is off limits for Lime e-scooters, probably because of all those pedestrians and cobble stones. So my next destination had to be the most Berlinish place of them all, Brandenburg Gate. From there, I went to the ‘U-Bahn’ station ‘Französische Strasse’ and left the e-scooter there.

The summary: Apart from the fact that the sun fried me like a bloody t-bone steak, the e-scooter ride was a lasting experience. I rode it for 1 hour and one minute over a distance of 7.7 kilometers (4.8 miles), through pretty much the entire center of Berlin.

Yes, this ride had a price tag: 10.30 Euro (11.73 Dollars or 9.24 Pounds). For that amount, I could have purchased a day ticket for Berlin’s public transport and a cool drink at a café, but neither would I have seen so much, nor would I have had so much fun.

The verdict: Yes. Recommended? Yes. But let’s watch it!