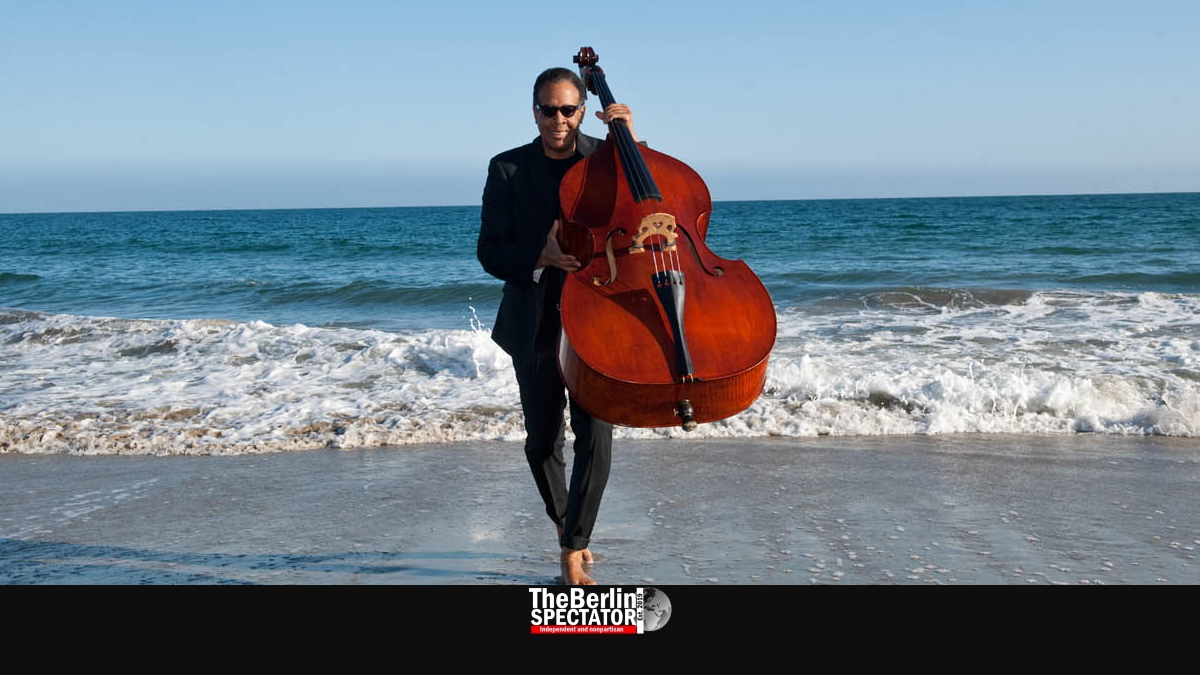 One of the most brilliant bassists on the face of the Earth, Stanley Clarke, is doing Detroit as we speak. But soon he will squeeze himself into an airplane seat again and come over to a continent called Europe. The endeavor will take him to Austria, France, Germany and the United Kingdom.

In 1986, Stanley Clarke hit the stage at the ‘Fabrik’, a legendary venue in Hamburg. Back then, he introduced his album ‘Find Out!’, which contained a Rap version of Bruce Springsteen’s ‘Born in the U.S.A.’ and a number of tunes which were meant to sound very ‘eighties’, with two exceptions, including ‘Campo Americano’. But we are already deviating from the subject here.

Chopin Instead of Jazz

“We’re gonna have some fun tonight.” This is what Stanley Clarke announced after the first few tunes. Seconds later, the 1200 people in the audience were beginning to understand what he meant. His stagehand installed a second bass, and all of a sudden all bassists who felt like slapping the night away with Stanley Clarke had the opportunity to do so. There were many of them. They stood in line for their turn. What a gig!

Thirty-five years before that night in Hamburg, in 1951, an opera singer in Philadelphia gave birth to a baby boy she named Stanley. Once he was a school kid, she encouraged him to pick up an instrument. While the violin turned out to be too small for him, Stanley Clarke was already an extremely tall guy, the upright bass was not.

It did not take long until he played with Jazz greats such as Joe Henderson, Pharoah Sanders, Dexter Gordon, Art Blakey, Mel Lewis, Horace Silver and Stan Getz, meaning the entire phone directory of New York, the city that never sleeps. Yes, he had moved there. But traditional Jazz sounds were not the only thing Stanley Clarke had in mind. He wanted to join the Philadelphia Orchestra and actually play Bruckner, Chopin, Mahler, Vivaldi and what not.

But things took a very different direction, when he met a young genius pianist by the name of Chick Corea. In 1973, the two friends founded the group Return to Forever (RTF). Little did they know their new project would be one of the most influential Fusion groups a few years later.

In no time, RTF delivered Jazz-Rock symphonies with both extensive and intensive arrangements. What they produced was not exactly Easy Listening, but they were brilliant. In spite of it all, the members of RTF recorded solo albums too.

In 1976, a gazillion projects coincided. Corea, who was already a member of the dangerous Scientology cult, recorded his masterpiece ‘My Spanish Heart’, and Return to Forever released ‘Romantic Warrior’, which became one of the most stunning Fusion albums of all time, and already their sixth release. And what did Stanley Clarke do, on top of it all? He recorded ‘School Days’, which would also become an iconic Jazz-Rock album the minute it hit the record stores.

While pursuing his solo career, the bass hero from Philadelphia teamed up with fellow musicians who were just as gifted, including the late pianist, composer, arranger and vocalist George Duke many times, the late Louis Johnson, another slap bass master (‘We Supply’), as well as with his colleagues Marcus Miller and Victor Wooten (‘SMV’).

This article could go on and on, about the man and his albums, including ‘If This Bass Could Only Talk’, the pieces he recorded with the late Gregory Hines, and everything else the author of these lines knows by heart. Did I mention Clarke composed soundtracks for movies, including the one for ‘Passenger 51’ with Wesley Snipes? But let’s fast forward a little.

Three Grammy Awards, fifteen studio albums, countless collaborations and just as many world tours later, here we are, in 2019. And the Stanley Clarke Band is about to raise roofs in Austria, Germany and other European countries this fall.

Annecy is a picturesque town in eastern France. That is exactly where Stanley Clarke is about to raise the damned roof on October 12th, 2019. On the 13th, the band is at the legendary venue ‘Ronnie Scott’s’ in London, and on the 15th in the Turkish city of Izmir.

The tour will then take Clarke and his guys to the Tourcoing Jazz Festival in northern France. They will do that one on October 17th. On the 18th, they will be performing at the ‘Quasimodo’ in Berlin. On both the 20th and the 21st, none other than Stanley Clarke and his band will invade ‘Porgy & Bess’, a ‘Real Music’ stronghold in jazzy Vienna.

Then, on October 25th, a gig in Yerevan (Armenia) is scheduled. One the 26th, they are scheduled to burn down the house at the ‘Jazztage Dresden’ festival before they follow the North Atlantic Route back to America.

Welcome back to Europe, Stanley Clarke! And let there be Funk.