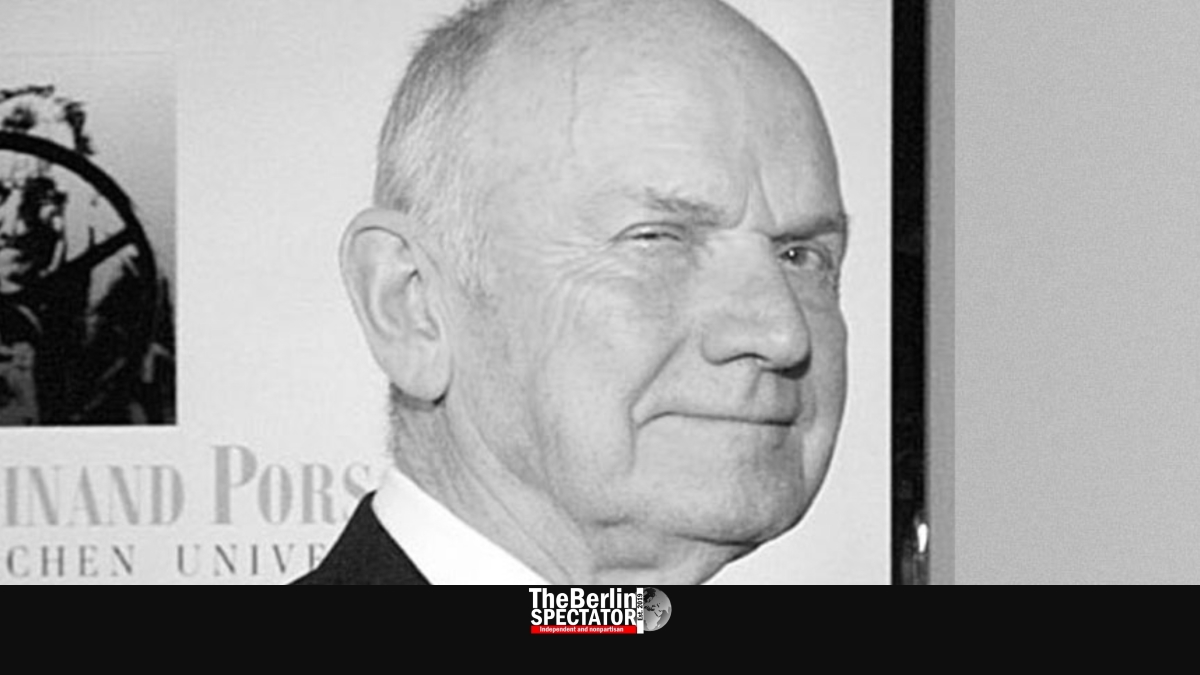 Without Ferdinand Piëch, the German auto industry would look different today. That is how much influence the engineer had. Ferdinand Porsche’s grandson shaped Volkswagen and other brands for decades. Piëch died on Sunday.

On April 17th, 1937, Ferdinand Karl Piëch was born in Vienna. That same year, his grandfather got a high position at Volkswagen’s predecessor, as chief engineer. At this moment nothing suggested that one day Piëch, the baby, would have more influence than his granddad ever had.

Ferdinand’s father Anton Piëch became head of the Volkswagenwerk in 1941. At the time, the factory was building military vehicles for Nazi Germany’s Wehrmacht. Both Anton Ferdinand Piëch and Ferdinand Porsche were arrested as war criminals in 1945. A year later, they were released from prison.

In 1962, both his father and grandfather had died years before, Ferdinand Piëch got a degree in mechanical engineering in Zurich. His master thesis was about the development of the F1 engine. Even then, very early on, Piëch showed he was as gifted as them.

It did not take long until Ferdinand Ferdinand Piëch was part of Porsche, the sports car company founded by his grandfather and father. He arrived on time for the final development of the Porsche 901, which was renamed 911 due to issues they had with Peugeot and the French company’s similar model names.

By 1966, Piëch was already Head of Testing at Porsche in Stuttgart. With his colleagues he worked on the 6 and 8 cylinder engines which would contribute to the big success Porsche would soon have. By the time Piëch became Head of Development, the sports car manufacturer celebrated big victories at major races.

In 1969, Ferdinand Piëch presented the Porsche 914, called ‘Porsche for the poor’ by heretics. But it sold well. The 914 was shorter than the 911 and had a very different shape. The ‘soap dish on wheels’ was far more affordable, especially the version equipped with the 4-cylinder Volkswagen engine.

In the early 1970s, Porsche started selling vehicles in the United States a lot. Over there, in America, Porsches lost part of their beauty. Because of the regulations, bigger bumpers and additional signalling lights were installed, which messed up part of the design. The 911 (G-Model) got new, ugly headlights. But the Americans did not seem to care.

In 1971, Porsche had a new policy according to which no members of the Porsche or Piëch families could run the company’s operations. So Ferdinand Piëch moved on to Audi, where he became Head of Technical Development in 1975. At this moment, he had already contributed to some of Germany’s most iconic cars and the industry’s success.

Even before Piëch became Audi’s CEO in 1988, he had turned the company in the right direction for future successes. The Audi Quattro program was in full swing. All Audis now had aluminium bodies. The advertising campaigns were just as successful as Audi’s participation at major rally races.

There was another step Audi took on Piëch’s watch. He did not want to leave the luxury segment to Mercedes’ S-Class and BMW’s 7-Series. So he had the Audi V8 developed. What may have have looked like a pimped-up Audi 100 or A6 at first became a bestseller later once it had metamorphosed into the A8.

The Peak of his Career

But the V8 was an impressive vehicle. The author of these lines tested one of the first A8s for a radio station he worked for in 1987 and did not really want to return the car to the local Audi dealership. That is how comfortable it was. Not to mention its great V8 sound and performance. It was Piëch’s work.

He reached the peak of his career in 1993, when he became CEO of Volkswagen, Audi’s parent company and the largest car manufacturer in Germany. Piëch’s model and engineering policy lead to big successes yet again. He revived Bugatti, purchased Bentley and other brands.

But his attempt to push Volkswagen into the luxury segment as well failed. The VW Phaeton, a beautifully designed upper class vehicle, did not sell. The project was thrown overboard a few years later.

Only four years ago, in 2015, Piëch, the man with gasoline in his veins, resigned from his last big post, which was Head of the Supervisory Board of Volkswagen. Last Sunday, one of the most influential auto industry executives suddenly died after a restaurant visit. He was 82.