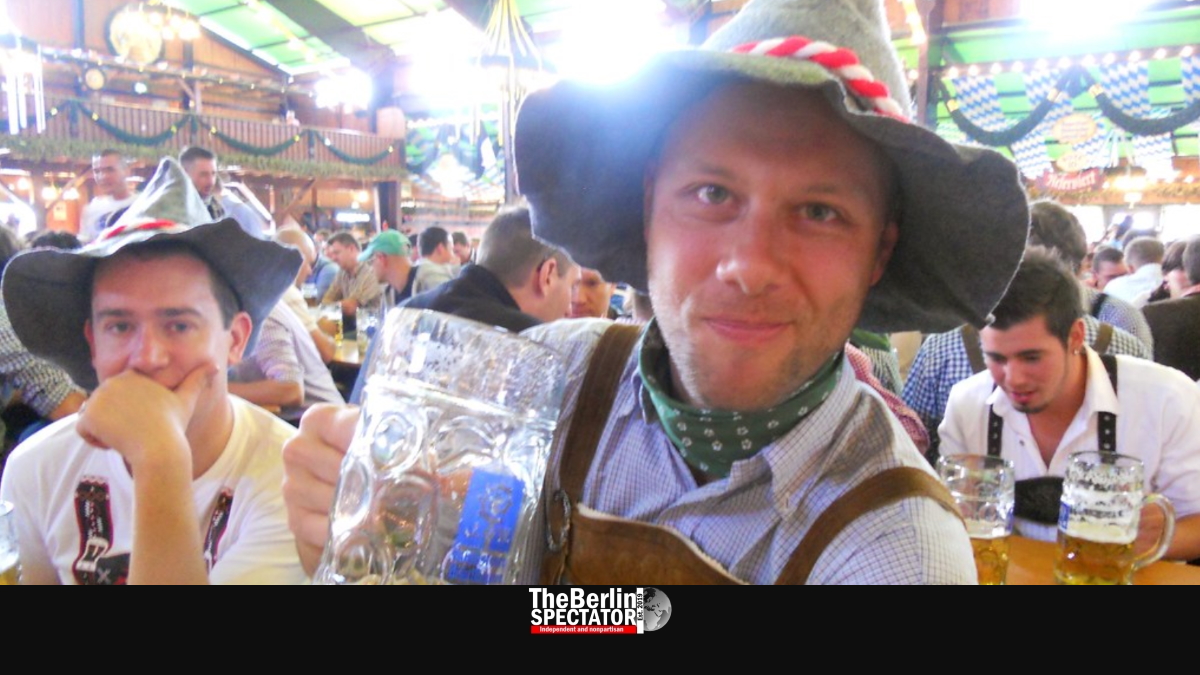 In Munich, this year’s Oktoberfest is about to commence. The main activity remains drinking. While modern items such as e-scooters and drones are forbidden at the ‘Wiesn’ location, exaggerated beer prices are allowed. So are special guests, such as Barack Obama.

The Oktoberfest started when Prince Ludwig married Princess Therese of Saxe-Hildburghausen on October 12th, 1810. People were invited to drink and celebrate on a field called Theresienwiese. The royal couple is not alive anymore, but the location is. So is the drinking.

Coming together and drinking like crazy, while listening to Bavarian music: The concept of the Oktoberfest is as simple as it is convincing. So, the fact that the traditional event has been exported is not really a surprise.

The Oktoberfest Chicago offers “steins”, whatever they think that is, and sausages at 14 spots in the Windy City. In the Valencia neighbourhood of Santa Clarita (California), a local brewery is staging an Oktoberfest too. And in the beautiful Mexican town of Morelia, the local Oktoberfest is about “¡Amor, alegría y cerveza fría!“, love, joy and cold beer. ¡Muy simpático, paisanos!

The virus is spreading in Europe as well. In Budapest, the Oktoberfest usually takes place at Kincsem Park. Brașov, in Central Romania, usually is in it too, with an Oktoberfest at the Stadionul Municipal. Even Sofia, the Bulgarian capital, usually has its version of the Bavarian drinking event.

Oktoberfest Offshoots in Berlin and Hamburg

Within Germany, some small offshoots of the Oktoberfest are scheduled to take place as well. There will be twelve of those in Berlin alone, including the ‘Oktoberfest at Alexanderplatz’ which will commence on September 20th and end on October 6th. There will be more of them in Spandau, Lichterfelde and other parts of the German capital.

In Hamburg, the city’s main Oktoberfest is scheduled to take place on the parking lot at top of the Karstadt department store at ‘Mönckebergstraße’, from September 2nd to 28th. More versions of the Bavarian beer fest will take place in Hamburg’s Bergedorf, Langenhorn, Wandsbek and Schenefeld boroughs. Yet another one was announced at the the Fish Auction Hall. Most German cities will have their own versions. In Frankfurt, a big one commences on September 11th in front of ‘Commerzbank Arena’.

But let’s stick to the main Oktoberfest in Munich. Bavarians simply call it the ‘Wiesn’. The original is scheduled to start on September 21st, 2019, in countless beer tents all over the Theresienwiese. It ends on October 6th. In Bavaria, even politicians need to get drunk at the event. So, why would that be? Well, because.

Biggest Festival on the Planet

In 1910, when the ‘Wiesn’ celebrated its 100th anniversary, the ‘Pschorr-Bräurosl’ tent was the largest ever. It accommodated 12,000 guests. Back then, 12,000 hectoliters of beer were served. The drinking had to stop during the two world wars. The Oktoberfest was cancelled then. For the 200th anniversary, in 2010, additional historic tents were set up. We will see what they will come up with in 2110. Maybe they will serve even more beer and pretzels.

Tragedy struck on September 26th, 1980, when a bomb exploded at the main entrance to the event. Thirteen people died on the spot, including Gundolf Köhler, the culprit.

But Bavarians and international tourists can’t get enough of the Schuhplattler dances, the pretzels, the fluids, and of urinating all over the ‘Wiesn’. Many Americans show up every year. So do Japanese and Australian visitors, and of course the Austrians, the Dutch and the Italians.

In 2010, more than 7 million liters of beer were served. The operators of the fourteen huge beer tents on site are being forced to play Bavarian brass music until 6:00 p.m. every night. Later they may switch to Pop music. Frankly speaking, it is hard to say what is worse.

A giant wheel and countless other amusement rides are also being set up. They will make the drunk throw up even more. But that’s what all the fun is about, right?

In Munich, all ways lead to the Oktoberfest in Munich. The location can be accessed easily from one of these three U-Bahn (subway, underground, metro) stations: Theresienwiese, Schwanthalerhöhe and Goetheplatz.

For security reasons, no drones or e-scooters are allowed on or near the ‘Theresienwiese’. By the way: St. Paul’s Church is closed for renovation. So there won’t be any panoramic Oktoberfest views from the top of its tower either.

But there is good news too: An ‘Oktoberfest App’ will show users where to get drunk and where their drunk friends are located. On top of it all, there might be a very prominent guest from a country called the United States of America: Former President Barack Obama might show up. At least he will hold a speech at the ‘Bits & Pretzels’ conference, part of which takes place at the ‘Wiesn’. Oh yes, we can!

Of course rules need to be followed. Large backpacks or bags are forbidden on the premises. So are any vehicles, sprays, glass bottles, knives or other weapons and animals. Baby strollers are not allowed on Saturdays, on October 3rd (German Unity Day) or after 6 p.m., for security reasons.

The Oktoberfest will be open Mondays to Fridays from 10:00 a.m. to 11:30 p.m., while no beer will be served after 10:30 p.m., at least officially. On Saturdays and Sundays, the ‘Wiesn’ opens at 9:00 a.m. and closes at midnight. More details can be found here, on the Oktoberfest’s official website.