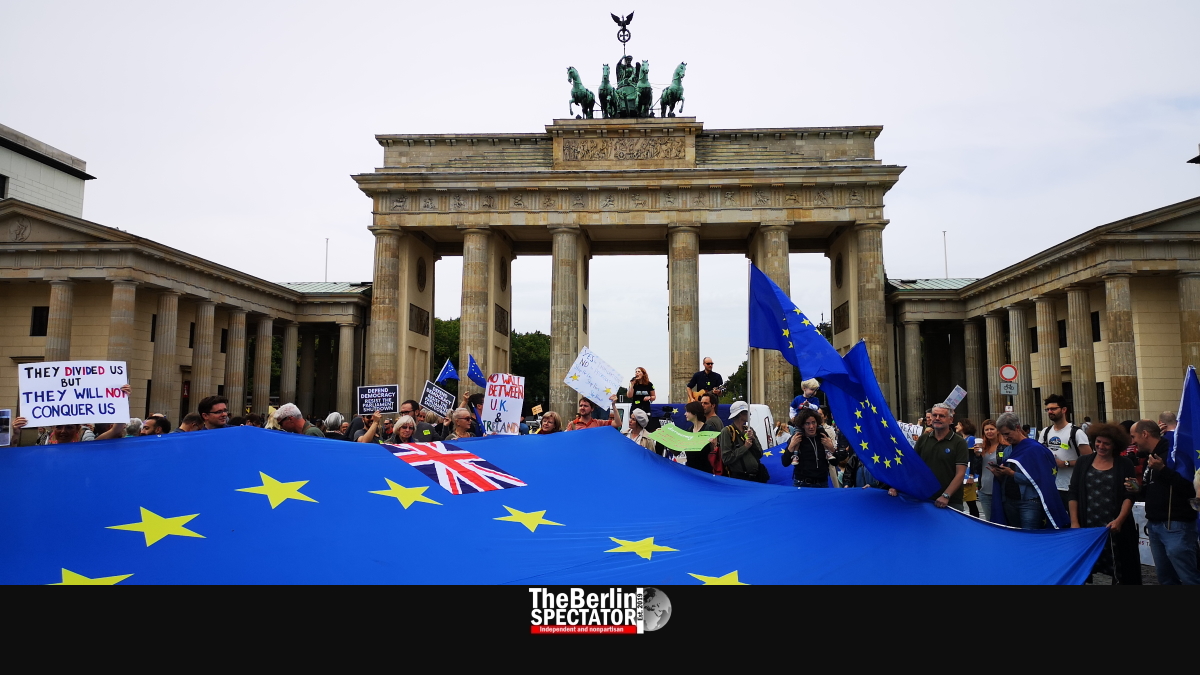 British nationals living in Germany gathered at Brandenburg Gate in Berlin today in order to protest against Brexit. Some of the estimated 150 participants held signs and a giant European flag. They chanted “Stop the coup!”

In Berlin, British citizens and the organization Pulse of Europe staged a protest right in front of Brandenburg Gate on Saturday. They summarized their concerns in a letter to Sir Sebastian Wood, the British Ambassador to Germany. The participants were hoping to make the gathering “the biggest ‘Stop the Coup’ demonstration outside the United Kingdom.”

On site, one of the organizers, Sara Gordon, told The Berlin Spectator she was hoping the U.K. parliament would be able to sit down and constructively work with the government. “Johnson is being extremely stubborn in his views”, Gordon, who is both British and American, said. “I am also not seeing that he is working for us as British citizens.”

“It looks like, whether we want it or not, we are going into a national election”, Sara Gordon stated. “And that’s going to open quite a number of doors. Instead of two political parties, there will be four.”

“We need to find a way to carry out a second referendum”, Sara Gordon’s colleague Gila Schoham, who is both Israeli and British, told this publication. She said there should not be illegal interference from foreign powers, and both sides should play fair. To her opinion, Britons should have “the opportunity to decide whether or not they wish to remain in the European Union, but based on facts.”

The MEP Sergey Lagodinsky from the German Greens was on site too. In front of the crowd he conveyed a message to Prime Minister Boris Johnson: “Talk to the people themselves. Let them speak. And don’t refer to the confused opinion expressed many years ago.”

Asked about his view on what should happen, Lagodinsky told our reporter, the main thing was to rule out a hard Brexit. “The British parliament should try to negotiate a soft one instead. But my personal preference would be to have a new referendum, because the people who voted last time were not informed properly. It was a confusing and confused vote.”

Participants at the Berlin rally were holding signs saying “They divided us, but they will not conquer us” or “We’ve had enough.” One sign held by a mother with a baby contained a strong one-word message: “Bullshit”. Several protesters wore stickers saying “Bollocks to Brexit”.

One concern the British organizers expressed was the possible loss of freedom of movement in Europe. Also they said Britons who had lived outside the United Kingdom for 15 years or longer had been disenfranchised and had not had a say on Brexit, a matter which had drastically affected their lives.

To thousands of Asian, Latin American and other tourists who shot a million selfies around Brandenburg Gate on Saturday, the anti-Brexit protest seemed to be an interesting event which added value to their sightseeing experience.