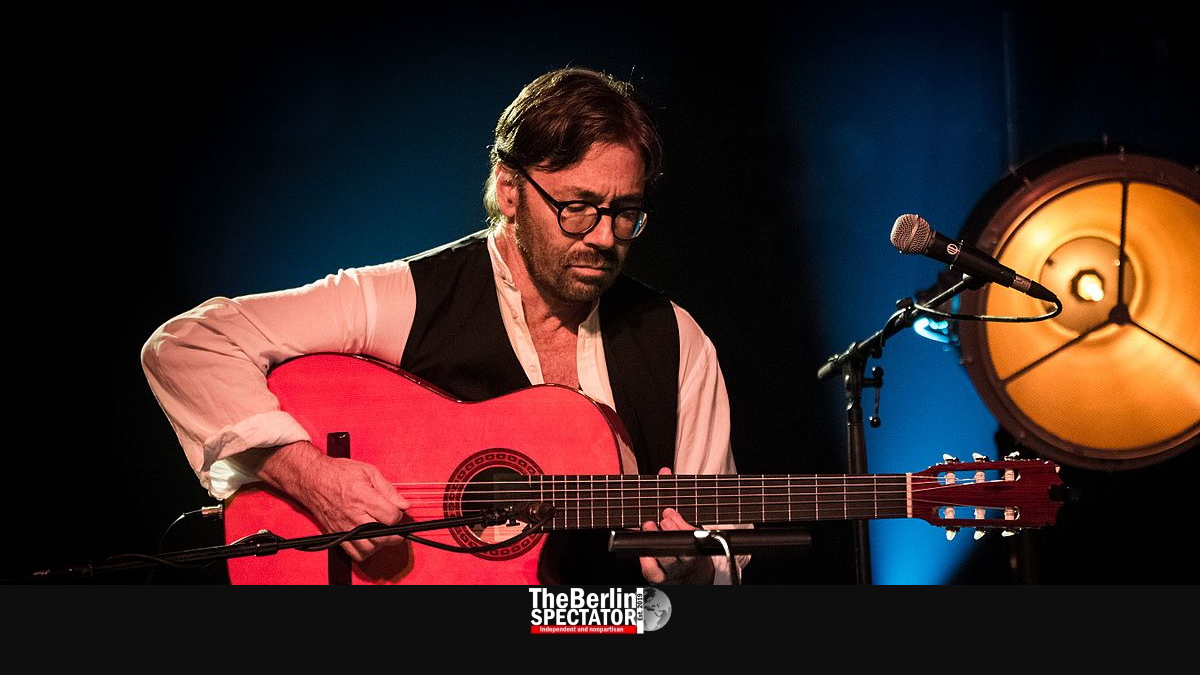 ‘Brilliant’ is an adjective that is overused. The same applies to the nouns ‘virtuoso’ or ‘genius’. But all of these words, and more of the kind, are more than appropriate when used in the same sentence with the name Al Di Meola. He is coming to Europe.

When you are born in Jersey City, you are technically from New Jersey. Real New Yorkers might make fun of you, but in a way you are a New Yorker anyway. It takes a few minutes to drive through the Holland Tunnel, which takes you straight onto Canal Street in Manhattan.

Al Laurence Dimeola, mostly known as Al Di Meola today, must have taken that short trip many times before he moved up to Boston, in order to study at the prestigious Berklee College of Music, along with dozens of other gifted people who would become stars like him.

In 1973, Al Di Meola, who was 19 at the time, was already brilliant on the guitar and quickly mutated into a genius on that instrument. The latter was the main reason for a phone call he received, by a stunning pianist, composer and arranger by the name of Chick Corea.

Chick, who has something like a side job as one of the spokespeople for the dangerous Scientology cult today, had a far better idea back then: He wanted none other than Al Di Meola to join Return to Forever, one of the most fantastic Jazz-Rock or Fusion bands ever.

Chick, Al, bassist Stanley Clarke and drummer Lenny White would absolutely kill it in the studio. When they recorded the album ‘Romantic Warrior’ in February of 1976, they might not have been aware of the fact that it would be one of the most brilliant Fusion albums of all time.

But Al Di Meola, who was into composing as well, developed ideas of his own too. That same year, he recorded a killer solo album. ‘Land of the Midnight Sun’ became a Fusion milestone. So did his second solo record ‘Elegant Gypsy’, which he released only a year later, in 1977.

In the 1970s, far more people understood real music or sounds of high quality than today. People like Al Di Meola, Stanley Clarke, Chick Corea, George Duke and Jean-Luc Ponty, or bands like Return to Forever, The Mahavishnu Orchestra, Sypro Gyra, and some others delivered breathtaking mixtures of Jazz, Rock, or even Funk, and World Music.

Al Di Meola kept on recording like crazy. In 1981, another collaboration became a big sensation. With fellow guitarists John McLaughlin and the late Paco de Lucia, he released ‘Friday Night in San Francisco’, the recording of an acoustic gig the three had performed. When this one hit the record stores, it became legendary within minutes. Another stunning recording.

This year, 22 solo studio albums, five solo live albums and truckloads of collaboration albums later, Al Di Meola, the Fusion and World Music genius, is embarking on yet another tour. In summer, he did a million gigs in the United States of America and one in Brazil.

But now he is coming over to Europe. On October 31st, he will be performing in the southern German town of Künzelsau, located close to Schwäbisch Hall and some 80 kilometers (50 miles) from Stuttgart. On November 2nd, Al Di Meola will be in Kassel. Münster is next, on the 3rd.

Also he will be hitting the stage at ‘Leverkusener Jazztage’, one of the best Jazz festivals in Germany, on November 17th, 2019. In addition, there are three gigs in Portugal in November. And one in Sofia, Bulgaria, on November 14th, 2019. So, it is safe to say Al Di Meola and his travel party will be “racing the devil on European highways” on their tour bus. Welcome back!

His entire tour schedule can be accessed on his website.