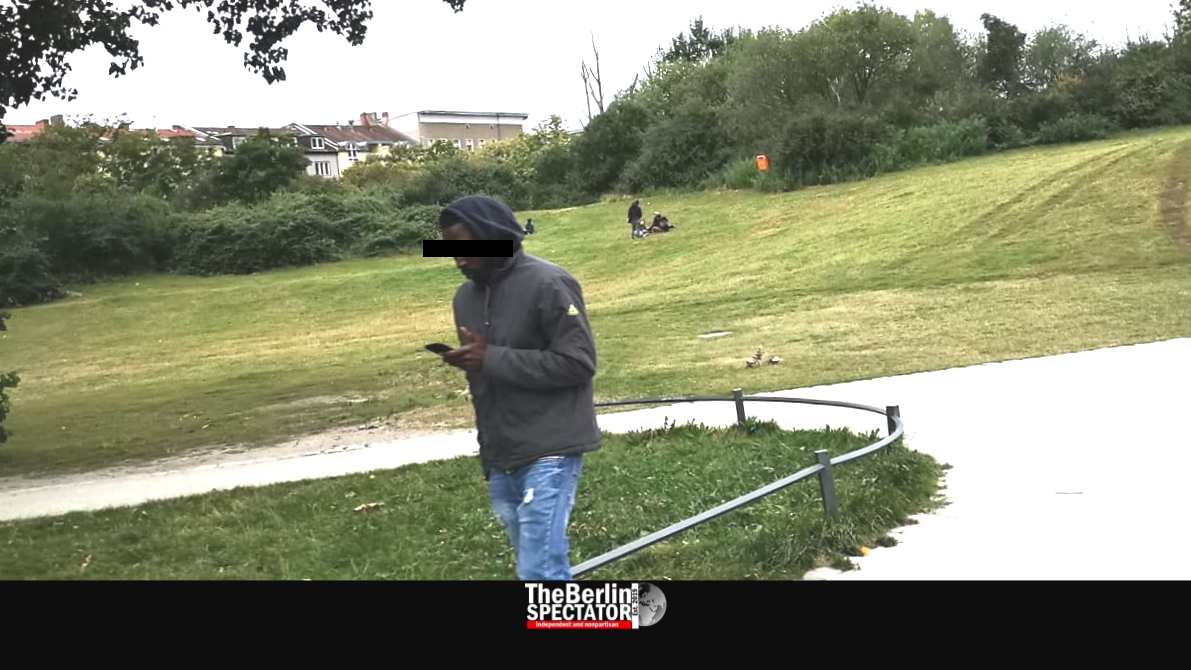 ‘Görlitzer Park’, a green spot in Berlin’s Kreuzberg borough, is a nightmare. It has developed into the city’s main drug haven, controlled by well organized dealers from western Africa. Even the district mayor will not enter the park at night.

Berlin, September 17th, 2019 (The Berlin Spectator) — The countless drug dealers who flock ‘Görlitzer Park’ in Berlin every single day know what they are doing. At two park entrances, the ones at the intersection of ‘Görlitzer Strasse’ and ‘Falckensteinstrasse’, and the one at ‘Cuvrystrasse’, a total of four guards watch everyone who enters or leaves.

When there is trouble, from their point of view, meaning once police officers are in sight or anyone suspicious, they will report the situation to the main dealer inside the park, one of about 30 individuals who offered drugs on Monday evening.

There also is a messenger on a bike who rides from one dealer to the next in order to share the latest park news. He might also deliver the merchandise, meaning the cocaine and heroin, to them. The dealers do not like to be watched. “What do you want over here?” is the question they will ask when they see a pedestrian or a person on a bike more than once.

A Bosnian collector of deposit bottles from a village near Srebenica might be tolerated. The handicapped man picks up beer bottles all day long. At the end of the month, this side job will increase the slim social welfare income he has by 150 to 200 Euro. It is the amount low-ranking drug dealers might transact every day.

Consumers, meaning drug addicts, are the park visitors the African drug mafia wants. The more, the better. Police say Gambia, Guinea-Bissau and Guinea, three western African states, are the main countries of origin of dealers they have checked at ‘Görlitzer Park’ since this year began.

Monika Herrmann, Kreuzberg‘s district mayor, is a member of the Green party. She has successfully inaugurated secure bike lanes painted in green on streets in her area, but she does not have any solution for ‘Görlitzer Park’ or other parks controlled by drug dealers.

The city state of Berlin has not been able to stop the drug dealing either. This applies to both the left-wing government Berlin has now, and the conservative one it had some years ago. Berlin’s police department does make arrests. But a few days later, the same dealers will be back at the spot allocated to them by their bosses, in many cases.

District mayor Herrmann knows the situation in the Kreuzberg parks, caused by the dealers. In a recent newspaper interview, the avid bicyclist said said she would not ride through the parks of her borough at night, since they were “too dangerous for women”.

She can not really do much. The dog owners, parents, kids and couples who enter ‘Görlitzer Park’ can only try to ignore the dealers and the danger they pose. In the meantime, the Berlin police department is present quite often, as the latest numbers show.

According to the German-language ‘Berliner Zeitung’ daily, there were 268 police operations at ‘Görlitzer Park’ from January 1st to September 9th, 2019, an average of almost 4 operations per day. The publication reported, 2100 individuals had been checked, 107 of which had been charged for dealing, and 215 for the possession of drugs. Many of the latter individuals might be dealers too, police believe.

The number of crimes at that park has generally increased, the report says. More than 1500 of them were registered during the first half of this year. Most crimes were connected to drugs, but there were assault and fraud cases too. Violence between rivaling dealers seems to be common.

In the past months, some ideas were discussed. In one case it was about the suggestion the drug dealers should have their official areas in the park, marked in blue. Of course that one was thrown overboard quickly. Then, the idea of closing the park at night surfaced. But it was dismissed a few days ago, because the dealers would flock the neighboring streets in this case. Nobody wants that to happen either.