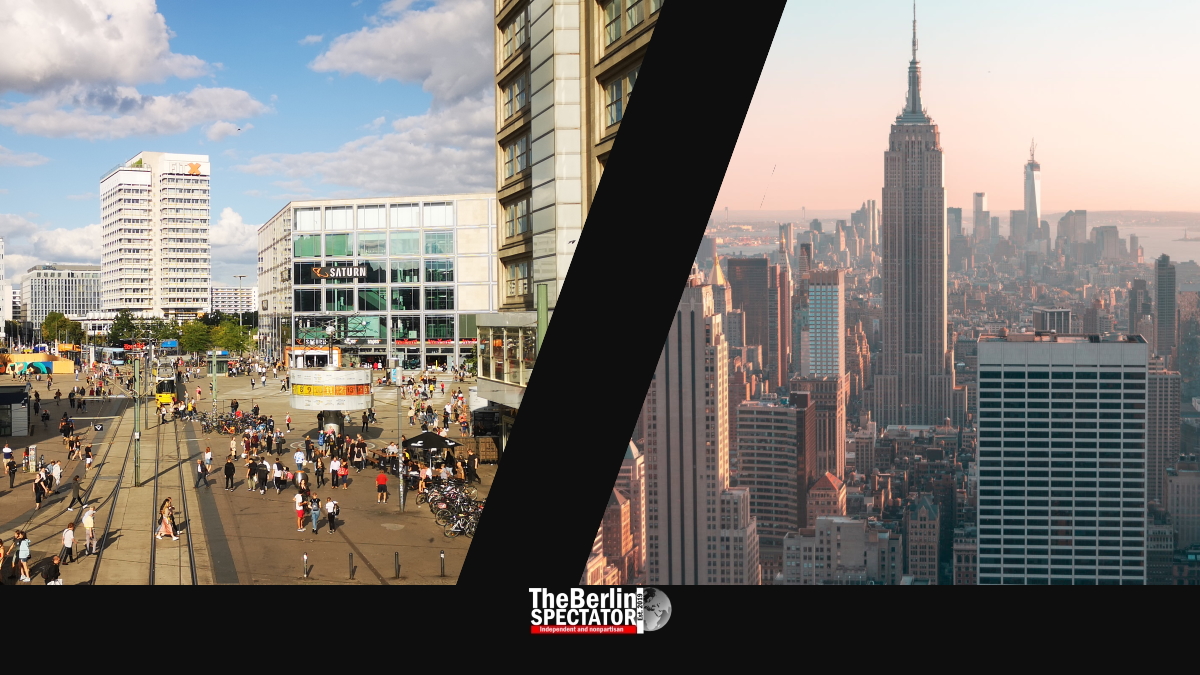 Berlin and New York City have signed a cooperation agreement which concerns tourism. The two cities intend to share experience in the field of destination marketing and sustainable tourism.

‘NYC & Company’ and ‘visitBerlin’, the two companies responsible for tourism marketing in their cities, will join forces. In New York City, they signed a cooperation agreement in the following areas:

In the latter case, students from this private college located in Pasadena (California) will develop “innovative ideas” for both Berlin’s and New York’s city tourism. Within the frame of the college’s ‘TestLab Project’, which is scheduled to commence next year, design students are supposed to “accompany the challenges and opportunities of growing metropolises with creative solution approaches”, the agreement reads.

“New York and Berlin stand for internationality, diversity, open-mindedness and freedom”, Berlin’s Economy Senator Ramona Pop said in Manhattan. “Our cities attract people from all over the world who bring in new ideas and support the economical development.”

Pop added that the appeal Berlin had was closely connected to the quality of living of its residents. Sustainability was an important guiding principle which could make sure tourism in Berlin was “agreeable, economical, ecological and socially refined”, Senator Pop said.

She also stressed she was “very happy about the commitment and the cooperation between ‘NYC & Company’ and ‘visitBerlin’, especially regarding “the key points of sustainable tourism and for the benefit of both New Yorkers and Berliners.”

Fred Dixon, the CEO of ‘NYC & Company’ said New York City and Berlin were “world class destinations” which had an extraordinary appeal. This included the culture, attractions, entertainment, the night life, the events and attractive, multicultural districts which invited visitors to explore them, in both cities.

Berlin and New York City may indeed have aspects in common, such as their diversity. But there definitely are rather big differences too. For instance, the earliest evidence of settlements in the area of Berlin dates back to the year 1192, exactly 300 years before Christopher Columbus discovered the American continent. The first settlements in the area of New York City were founded in 1624.

By now, NYC has almost 8.2 million residents, while Berlin recently counted 3.7 million, less than half as many. What the number of tourists is concerned, New York outperforms Berlin by a huge margin, with 65.2 million visitors in 2018. Among those, 13.5 million came from abroad and 51.6 million from within the United States. Berlin’s total number of tourists was 13.5 million, international guests included.

The two cities also look and feel very different. But what sustainable tourism and other aspects are concerned, they seem to want to go in the same direction.

While in New York City, Senator Ramona Pop was going to inaugurate Berlin’s new representative office at the German Chambers of Commerce at 80 Pine Street today, right in Manhattan’s financial district. The ‘Chopt Creative Salad Co.’ and other great lunch places are just around the corner.

Berlin’s new representation is supposed to stimulate the economical partnership between the German capital and the United States of America. With a trade volume of 2.5 billion Euro (2.76 billion Dollars or 2.22 billion Pounds Sterling), the U.S. are among Berlin’s most important trade partners.