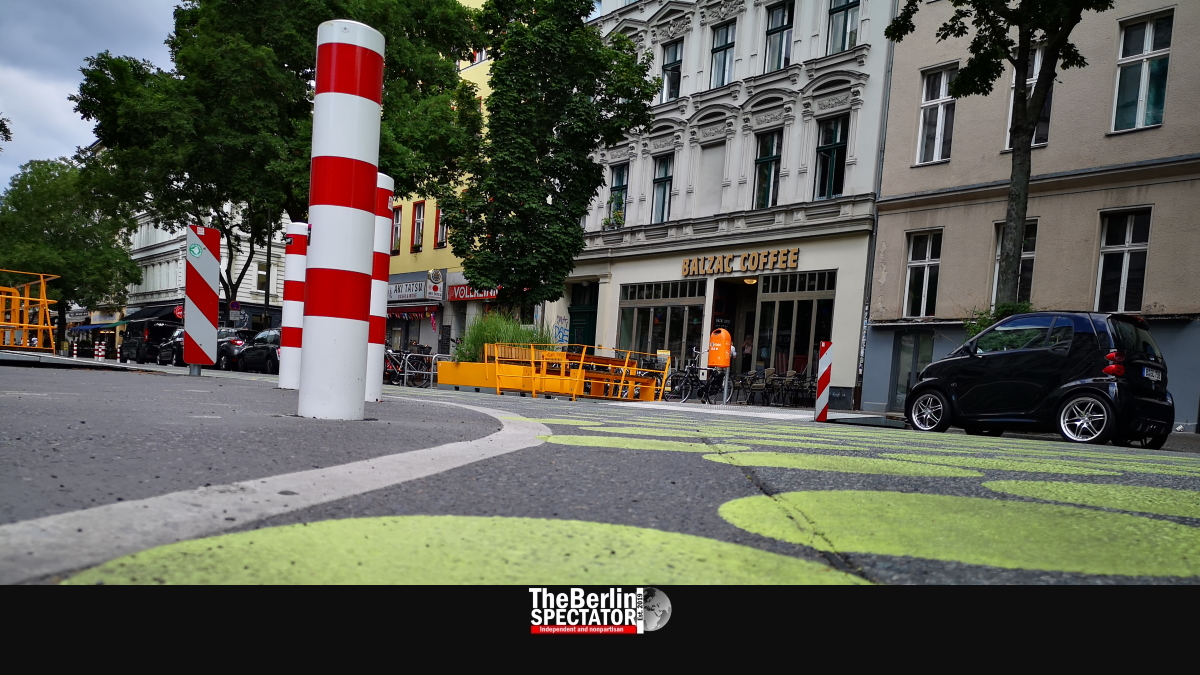 Note: An earlier version of this article was previously published as ‘Berlin: Expensive Encounters in the Decelerated Zone’.

Do you remember the 23rd night of September? Well, you will, because that is when the ‘decelerated zone’ experiment in Berlin’s ‘Bergmannstrasse’ will end. Whether it was successful or not is up to the beholder.

In the past four decades, ‘Bergmannstrasse’, especially the part between ‘Zossener Strasse’ and ‘Nositzstrasse’, developed from a filthy street somewhere in West Berlin, with gambling halls and other rundown businesses, into an elegant one with great cafés, pubs and restaurants.

At ‘Aki Tatsu’, juicy and delicious Sushi is being offered. At this place, happy hour never ends, meaning prices are always at 50 percent. This means 50 Cents are 1 Euro. Consuming Sushi at this place is priceless, literally.

‘Café am Meer’ is just the right place for ‘business meeting breakfasts’, which are very popular in Kreuzberg. They usually take place at around noon, shortly after ‘Bergmannstrasse’ residents wake up. ‘Lupita’ is a restaurant they call Mexican, on the same block. Here, they offer food from several Latin American countries and ‘Tex Mex’ items such as Nachos with melted cheese on top.

When the owners, employees and guests look out the window, they see what the district and the Berlin Senate call an experiment. It is supposedly a “decelerated zone”, an alternative traffic setup. It includes so-called ‘parklets’ which are sets of revolving chairs, made of metal and wood, protected by railings, which turned parking spots into “encounter zones”.

Green to yellowish dots painted all over the street are visible too. By now they have partially been washed away by heavy rain. The message they are supposed to convey: “Drive slowly, watch out for pedestrians. This is a politically correct and decelerated encounter zone. Cars are not really wanted here.”

From the Drawing Board to Real Life

This experiment is part of the Berlin Senate’s efforts to change the city’s traffic concept. There are already wider bike lanes, ‘bicycle streets’ and ‘temporary playing streets’ for children. Parking fees in the city center will be doubled, the areas in which they are being charged extended substantially.

Germans have their traits. When they come up with a plan, it will contain a gazillion details. Then they need permissions in the form of documents with fancy looking seals. For that reason, this experiment the Kreuzberg district implemented in spring took seven years to move from the drawing board to real life.

Once those ‘parklets’ and dots were finally there, several problems surfaced. The conservative opposition, supported by certain newspapers, did not miss any opportunity to criticize the shit out of the ‘Bergmannstrasse’ experiment. But many residents do not like the approach either.

One of the issues was actually a foregone conclusion: ‘Parklets’ with fancy chairs invite people to sit down and talk to each other. When will they do so? After having a “a drink” at one of the nice pubs and restaurants in this neighborhood, meaning when they are drunk. Will they be considerate and quiet in that state? No.

So, instead of contributing to quietude by getting rid of parked cars and some of the traffic, the whole thing lead to more noise. The fact that the district has employees who roam the streets and remind people of the fact that some people want to sleep at night, does not help much either. The minute they leave, the drunkards start laughing and shouting again.

For some residents, on the other hand, the measures did not go far enough. This stretch of ‘Bergmannstrasse’ should have been turned into an actual pedestrian zone, they believe. Just trying to decelerate things with a few dots and chairs is not convincing, to their opinion.

Quite a Price Tag

The expensive encounters in the decelerated sector will end now. This coming week, the district will have the dots and ‘parklets’ removed. All they wanted to do is to show how a decelerated zone could look like. While the residents are being polled on the matter, things will be converted back to the state ‘Bergmannstrasse’ was in before. It will happen on September 23rd.