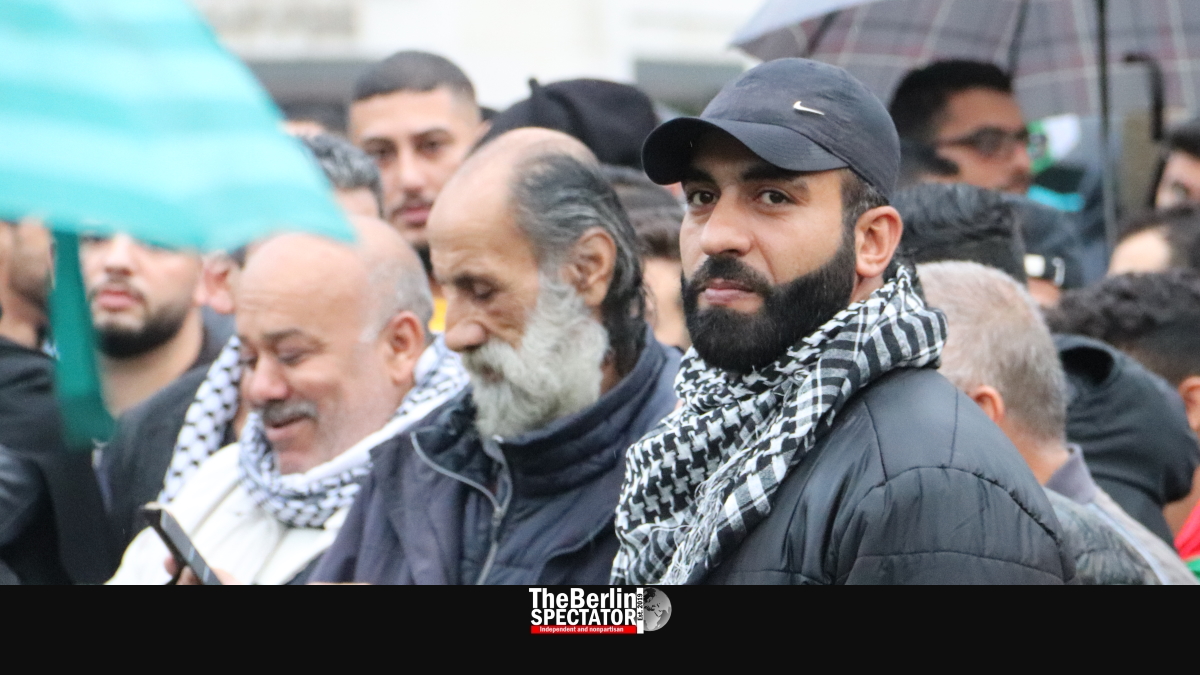 Update Sept. 26th: According to the Berlin police department, one participant shouted “Bombard Israel!”. A criminal charge was filed against him. Four other individuals got into trouble too because they had brought knives and pepper spray. One person was caught with drugs.

The city state of Berlin has imposed a performance ban on Shadi Al-Bourini und Shadi Al-Najjar, two Palestinian rappers known for their antisemitic lyrics. They were supposed to hit the stage at a Palestinian rally at Brandenburg Gate today.

Shadi Al-Bourini und Shadi Al-Najjar, two Palestinian rappers, came to Berlin on Wednesday in order to perform at a Palestinian rally right in front of Brandenburg Gate. The two are known for their antisemitic lyrics in which terrorism is being glamorized. “I want to crush you under my feet” is the message they have for Jews.

Just before the rally commenced, Berlin’s Interior Administration forbade that performance. About 700 protesters on site were disappointed. Some did not like the restrictions Berlin imposed on their protest either. The organizers had to read those to the crowd in both German and Arabic.

According to the instructions they got, no hate speech against people of any ethnicity or nationality was allowed, no incitement and no glorification of violence. Once those restrictions were read to the crowd, an argument erupted among the Palestinian participants. A tall man with a child on his shoulders shouted at the man who had read the instructions aloud.

The protest in the very center of Berlin started with issues. First, it took the organizers some 45 minutes until they got the generator going. They had forgotten to open the fuel pipe. Then it started raining. Still, hundreds waved Palestinian flags and danced to recorded music.

Geisel: ‘No Room for Antisemites’

„Brandenburg Gate is a symbol of reconciliation and peaceful togetherness”, Berlin’s Interior Senator Andreas Geisel said. “We will not allow anyone to incite hatred or call for violence or annihilation.” Geisel stated, the memorial for the murdered Jews of Europe was only a few steps away from Brandenburg Gate. It would always be a reminder “to us.” Geisel made clear there was no room in Berlin for antisemites or Israel haters.

Security was tight. An estimated 200 police officers were on site. Some were watching the protesters’ every move. A police interpreter monitored all speeches and the lyrics of the recorded songs played. No big incidents were reported. But there was a conflict between police officers and a group of people who intended to demonstrate against antisemitism next to the Palestinian rally.

One of them was carrying a sign saying “No room for antisemitism”, in German. A police man ordered the man and his friends to walk away from the side of the rally. He said he wanted to avoid “provocations”. This lead to a short, but intensive discussion. One person in the small group even called Senator Geisel, to complain.

Earlier on Wednesday, the Israeli Embassy, the American one and the American Jewish Committee in Berlin had asked the authorities to ban the concert of the two antisemitic rappers and to impose restrictions on the Palestinian rally. This is exactly what happened in the evening.

In March, Berlin had imposed a similar ban on the convicted Palestinian terrorist Rasmea Odeh. She was not allowed to take part in any political events or to hold any speeches. Rasmea Odeh left the Schengen states shortly before she was going to be deported.