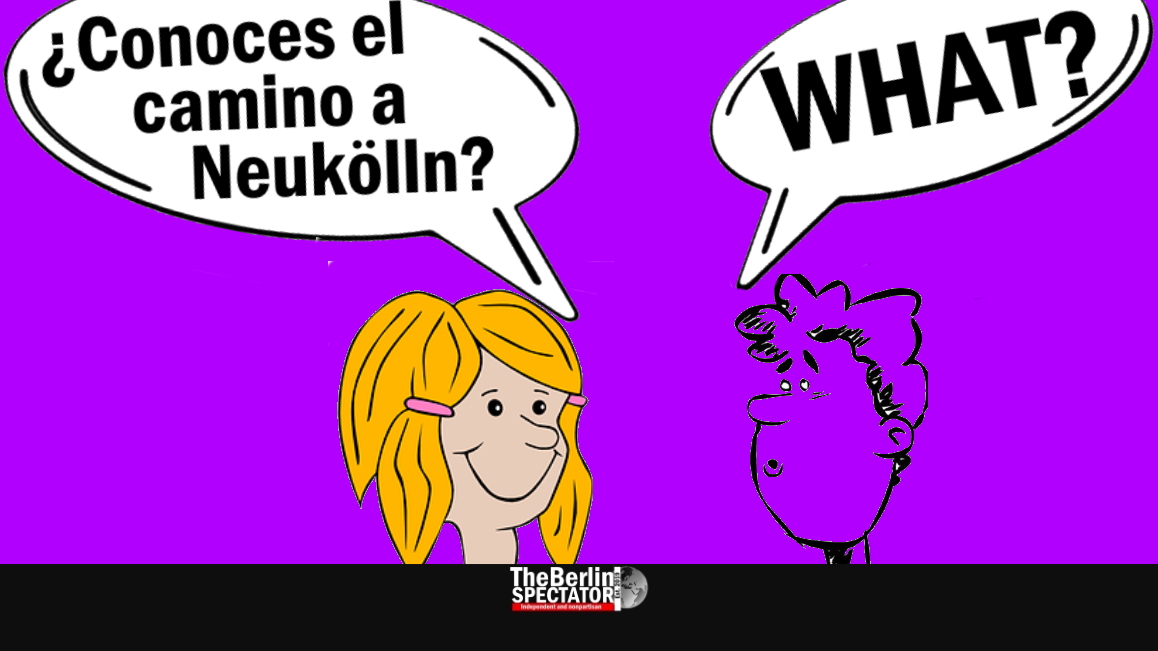 Berliners speak a lot, in multiple languages and about anything. German, Turkish, Arabic, Russian and English, in this order, are the most popular languages in the German capital. Things look very different from the European perspective.

In good old Berlin, people do talk a lot. During a walk on ‘Karl Marx Strasse’, you can hear more Turkish than in Istanbul and more Arabic than in Kairo. Especially younger people who use those languages seem to be switching back and forth between their mother tongue and German all the time.

What certain sounds are concerned, Arabic and German are similar. Neither of these two languages sounds too romantic. Both seem to be excellent languages for rants or complaints. A few blocks further north, close to ‘Landwehrkanal’, they are talking in Bulgarian, in front of a food store specialized in feta cheese and other stuff from that country. But even more than this language, Russian can be heard all over Berlin. Хорошо!

But the closer we come to Berlin’s universities or more touristy spots in the city, the more we hear English. Actually, it is all English. Americans spread their awesome accents, Britons their splendid way of speaking the language of Shakespeare. In addition, expatriates from non-English-speaking countries speak English to each other, in the cutest “foreign accents.”

There may not be statistics about spoken languages in Berlin, and the countries of origin do not paint a detailed picture. But we know that Latinos most of whom speak Spanish, are represented quite well too. Polish is yet another popular one. And Hindi. Berlin’s Indian community is big. There is a ton of languages. Period.

Looking at all of Europe, things look different indeed. On the eve of the European Day of Languages, which is being observed on September 26th of each year, Eurostat released some numbers. “English is, by far, the most popular foreign language to be studied in the EU. Nearly 98% of pupils learned English in lower secondary education in 2017”, today’s Eurostat statement read.

While this may not be surprising, the next numbers are. French is the next popular language, studied by 33.4 percent of the students mentioned, German is at 23.3 percent and Spanish, a language far more important than English from a global point of view, is studied by 16.9 percent.

There are rather big differences between countries. For instance in Germany’s neighboring countries Poland and Denmark, the language of Goethe and Schiller is very popular. In countries like Ireland, Cyprus, the Netherlands, Portugal and Romania, French is being studied like crazy. Très bien.

The annual European Day of Languages was introduced in 2001, for a continent with a million tiny countries with almost as many languages. Do we speak English? What else do we speak? Well, we would need subtitles in Glasgow, Valium in Moscow, an excellent dictionary in Budapest and a few bottles of beer in Paris, in order to be able to follow what in the hell they are saying.

For those reasons, and because Europeans work and travel everywhere, the European Day of Languages is supposed to encourage people to study languages. Those will help them to be able to take advantage of the rights they have in the European Union, and grab the opportunities all over the continent, even beyond the E.U.’s turf.

According to the Council of Europe, English alone is not enough anymore. More than 200 languages are being spoken on the continent. Of course those include languages which were imported from other parts of the world. The Council reminds everyone that “learning other peoples’ languages is a way of helping us to understand each other better and overcome our cultural differences.” They do have a point.

Raising awareness of Europe’s rich linguistic diversity is what it is about. Let’s act accordingly. Viel Glück. WHAT?