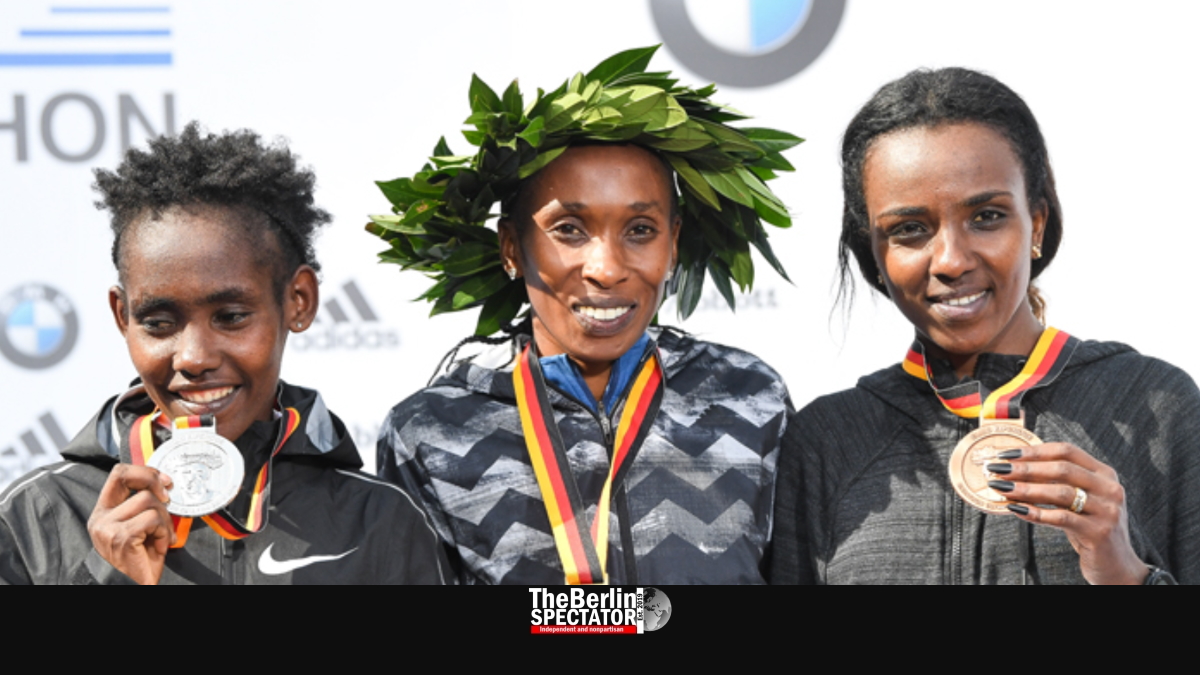 Driving through Berlin is a mission impossible these days. Running is a far better option, now that the Berlin Marathon is about to commence. It’s all about record numbers. Here are two of them: As many as 46,983 runners from 150 countries will take part.

Half Berlin is blocked, closed, disabled, inaccessible, barred for the usual traffic. Most of those who are moving during the Marathon will do so on two legs and almost as fast as Speedy Gonzalez. The mission, should you choose to accept it, is about getting 42 kilometers (26 miles) behind you as quickly as possible.

For anyone who takes part in the main Berlin Marathon run, the likelihood of being overtaken by Kenenisa Bekele, an Ethiopian long distance runner everyone wants to beat, but most likely nobody will, is high. He will hit the finish line while others are still putting their running shoes on.

Participants might also see Gladys Cherono in their rear view mirror, but not for long. Even before they know what is happening to them, the record runner from Kenya will have passed them. Only seconds later she will already be out of sight. That is how fast she runs. At the 2018 Berlin Marathon, which she finished in 2:18:11, she was the fastest woman.

Among the ladies, Ruti Aga from Ethiopia came in second, just a few seconds behind Cherono, and the Ethiopian Tironesh Dibaba was the third female runner to make it. All three ladies are seen on the main photo at the top of this page.

The fastest men were not much faster than the winning ladies. Eliud Kipchoge, Amos Kipruto and Wilson Kipsang, all from Kenya, were the first three to cross the finishing line last year. Kipchoge covered the whole thing in 2:01:39 hours, almost at the speed of sound. Some of these winners will be ‘doing’ this year’s Berlin Marathon too. Guess who will be among Sunday’s winners.

The 46,983 runners and other participants, a total of 75,000 people, need some room, and Berlin is providing it. Earlier this week, the police department and the fire brigade reported they are ready for the big event. So are the organizers.

You want more big numbers? No problem. Here we go: Since it all started in 1974, a total of 970,000 runners have crossed the Berlin Marathon’s finish line. This time, on Sunday, the one millionth participant will do so. This means becoming the 20th to finish the Berlin Marathon will not put anyone on the first page of all newspapers, but hitting the 30,000th spot will.

Read related article: ‘The Berlin Perspective: How to Lose the Berlin Marathon’

These days, everyone is listening to Greta Thunberg. So the Berlin Marathon’s organizers decided to do so too. Jürgen Lock, the CEO of SCC Events, said sustainability was important. But it depended on the behavior of the participants too. Only if those recyclable cups we use are being thrown into the designated trash cans, they would be recycled, but cups which had to be cleaned away from the street would not.

For those who still want to register: Forget it. Our reporter learned it the hard way. But the registration period for the 2020 edition begins on Monday and ends on October 31st, 2019. The early bird will catch the worm while those who oversleep will be watching the next Marathon on their screens, or standing on the sidelines.

Best Wishes from the Governing Mayor

Berlin’s Governing Mayor Michael Müller will be on site in order to start some of the so-called ‘running waves’, and he will be holding the ribbon at the finishing line, until the winner comes in. Every year, the Marathon stood for the city of sports, Berlin, with its diversity, enthusiasm and its accomplishments, Müller said ahead of the event.

He thanked all helpers who had contributed to making the Berlin Marathon one of the most prestigious events of this kind in the world. The city was looking forward to welcoming guests from all over the world. Müller said he hoped all participants would reach the finishing line healthy and without injuries. “It’s the taking part that counts”, he stated.

The English version of the BMW Berlin Marathon’s website can be accessed here.

Do you like this article? If yes: We are glad you do. Our question: Would you consider supporting this publication?
Up to now, we have been working without income for an entire year (as of September 23rd, 2019).
Your donation would make things easier for us. The word ‘existential’ could be used here as well. Thank you.
Please visit our donation page or go to our Paypal page directly.