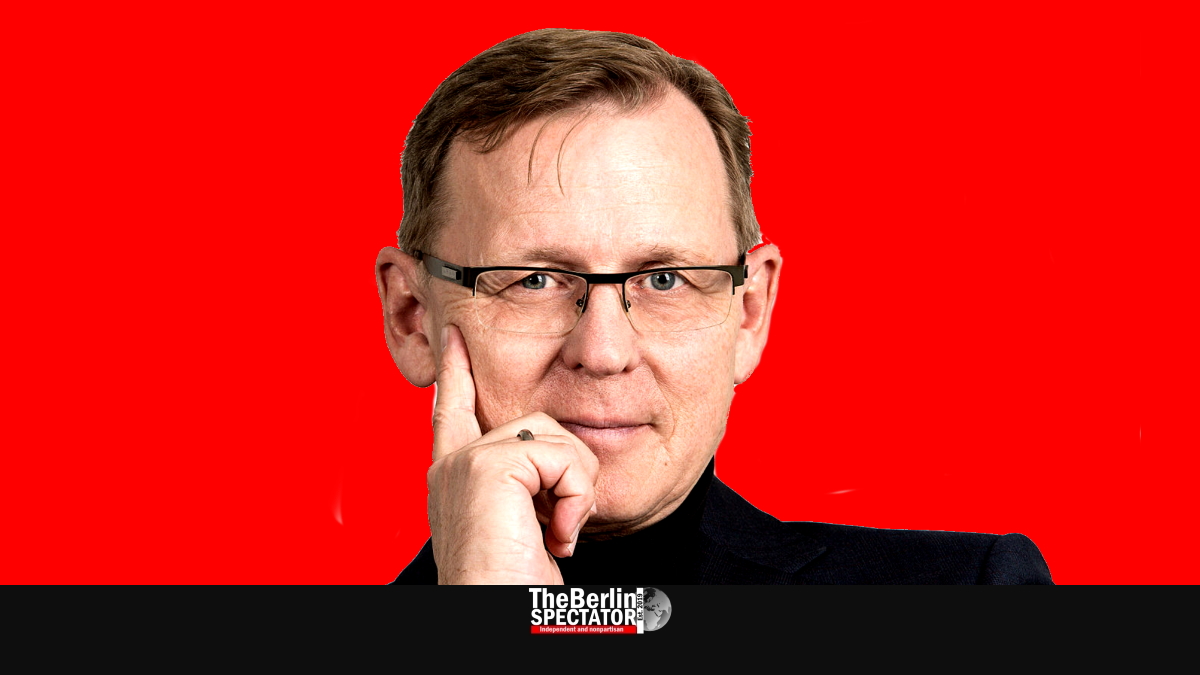 Update October 17th: According to the latest polls the AfD lost support and can expect around 20 percent of the vote. But the conservative Christian Democrats (CD) are now on Ramelow’s tail. The gap between his ‘The Left’ and the CDU has reportedly shrunk to 1 percent.

In Germany, Thuringia’s left-wing governor Bodo Ramelow wants to win the state legislature elections later this month. He needs to defeat an extremist right-winger who is on his tail. And there is another problem.

Thuringia is one of the smallest provinces in Germany. A total of 2.1 million people live in this eastern federal state. About 1.8 million of them are eligible to vote on October 27th, 2019. The latest polls suggest things might be changing. The worst case scenario is a victory of the extremist right-wing party AfD.

An Unconventional ‘The Left’ Member

According to the latest polls German-language media reported about, Bodo Ramelow, the only Chief Minister from the party ‘Die Linke’ in the entire country, might win the election with a bit more than 27 percent of the vote. But the radical right-wing AfD is following him closely, with almost 24 percent. Polls usually have a margin of error, and things could change within a few weeks, in any direction.

Many residents in Thuringia like Governor Ramelow. To them he is a down-to-earth guy who does not shy away from issues Thuringia has and who will openly say what he thinks. There are aspects about Ramelow which are unconventional. First of all he is a Westerner who grew up in Lower Saxony. To eastern German voters, this aspect would usually be negative. In his case, they seem to accept it.

Bodo Ramelow is the son of a Lutheran pastor and a practicing Christian. This is something nobody would complain about at all in most other parties. Within ‘The Left’, there are some who look at him in a weird way for that reason. But Ramelow is pretty much untouchable because he is successful, popular and one of the very few stars the left-wing party has left.

He wins elections while his party colleagues are losing them these days. ‘The Left’, a direct successor of the GDR’s self-proclaimed ‘unity party’ SED, used to be the main protest party for hundreds of thousands of eastern Germans. Recently, they have lost a lot of ground to the right-wing radicals of the AfD. But in Thuringia this only applies in part, thanks to Bodo Ramelow’s popularity.

The ‘Führer’ of the AfD in this federal state is Björn Höcke, one of the most radical politicians in Germany. In spite of his scandalous statements, the party has not kicked him out. This point says a lot about the true nature of the AfD, according to its many critics (read separate article ‘AfD’: Germany’s Wolf in Sheep’s Clothes). Höcke is so radical that only days ago a court ruled he may be called a ‘fascist’.

What? This is not the only article The Berlin Spectator offers?
No, please check out our main page.
Chances are you will like what you see.

Höcke does not hide the nature of his thoughts. “Christianity and Judaism are an antagonism”, he said in 2015. “That is why I have no use for the expression Western Christian-Jewish civilization”. His followers, who applauded, understood exactly what he meant. Höcke is also known for using terms spread by the original Nazis in the 1930s, including “traitor of the people”. To him, the Allies’ victory over Nazi Germany in 1945 was “a catastrophic defeat”.

In case Höcke’s AfD wins in Thuringia on October 27th, they will not rule. It would be up to the other parties to form an anti-AfD coalition. But the extremist right-wingers should not have this kind of victory, German democrats (democrats as in supporting democracy and democratic, non-Nazi parties) believe.

Bodo Ramelow, Thuringia’s ‘father’, the soft-spoken ‘nice guy’ with a lot of authority who often gets his way, has another problem: One of his coalition partners is shrinking. The Social Democrats (SPD) have lost a lot of ground in most other parts of Germany too. The other coalition partner, the Greens, will grow a little, but not enough to make up for the ‘shituation’, from the perspective of the coalition government.

As things stand now, the “red-red-green coalition” will not have enough seats. Bodo Ramelow can not count on the conservative CDU, which might get around 23 percent and become the third-strongest party, right behind ‘The Left’ and the AfD. Even if he begged on his knees, chances are the CDU will not work with ‘The Left’. The conservatives will not form a coalition with the AfD either. The question is: Which constellation would actually work?

All of this means that the situation could become very difficult after election day, if the polls paint the right picture. In recent elections in Brandenburg and Saxony, political stalemates were avoided. The AfD came in second in both cases.

Most western Germans and about 75 percent of all eastern Germans are asking themselves how on Earth the extremists got that much support. One of the answers could be the fact that some eastern Germans feel they are still trailing behind, 30 years after the Berlin Wall fell and 29 years after Germany’s reunification. Therefore they want to shock the westerners.

The subjects people in Thuringia care about, such as education, climate protection, migration, policies for families, security and health, play a relatively small role during the election campaign. The man himself, Bodo Ramelow, and ideologies are in the center of the attention.

Do you like this article? If yes: We are glad you do.
Our second question: Would you consider supporting this publication?
Up to now, we have been working without income for an entire year (as of September 23rd, 2019).
Your donation would make things easier for us. Thank you.
Please visit our donation page or go to our Paypal page directly.