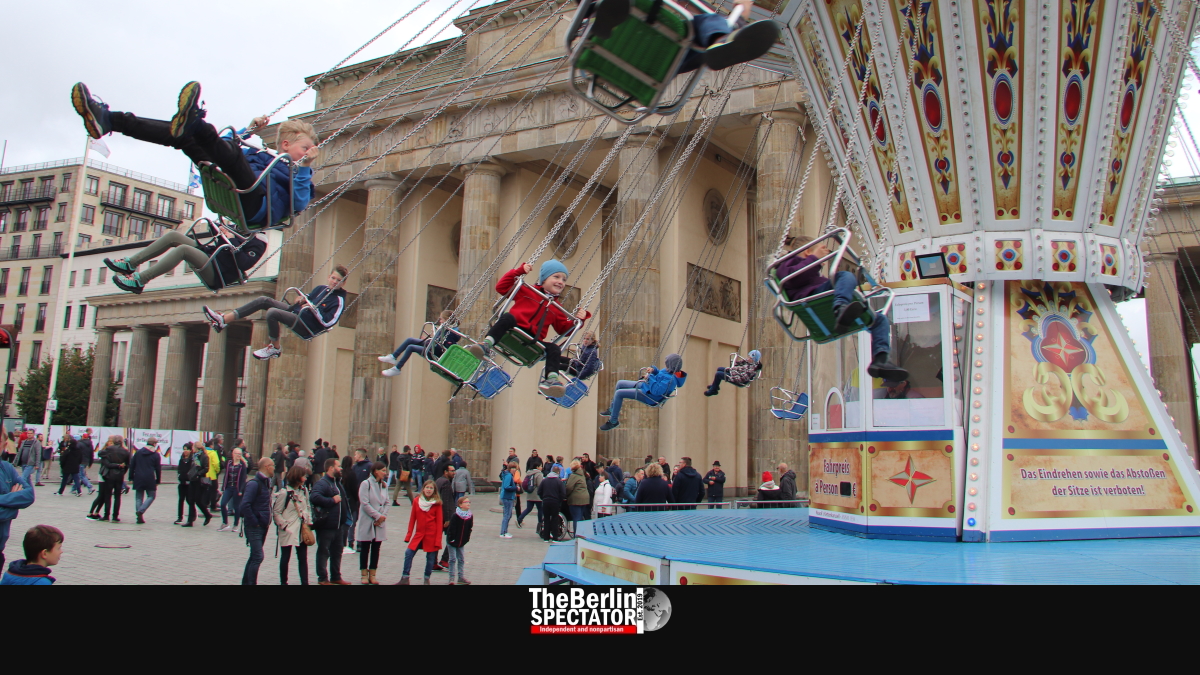 In Berlin, German Unity Day was busy, especially for the police. A large festival, protests and a Nazi gathering caused a lot of work. The city state’s police department needed reinforcement.

On a rainy Unity Day in Berlin, thousands of residents and visitors celebrated at Brandenburg Gate. At little stalls, all kinds of snacks were offered, including Mexican burritos, tons of sausages and steak burgers. Young ladies, with and without guitars, sang songs on three stages set up by a radio station.

A swing carousel in front of the Gate made children smile, a giant wheel gave visitors great sights from above on ‘Strasse des 17. Juni’. Since the main Unity Day celebration took place in Kiel this time, 29 years after the reunification of Germany, the festivities in Berlin were relatively small, compared to last year, when Berlin threw the main party itself.

While some partied, others protested. At ‘Alexanderplatz’, some 10,000 people gathered in order to demand affordable housing in the German capital. Left-wing groups which were part of the rally called for expropriations of large real estate companies, on top of a so-called ‘rent cap’. This rally ended at ‘Kottbusser Tor’ in the afternoon.

Berlin’s police was so busy this weekend, they even got help from Saxony-Anhalt province. Hundreds of officers watched a Nazi rally at central station. They also made sure a counter protest did not come in contact with the radicals, in order to avoid provocations or even violence.

The Nazis and their supporters gathered at Washington Square. Travelers who wanted to leave Berlin’s central station through the southern exit were turned back by police. They had to take a detour. The same applied to those who wanted to enter from the south.

Since the extremist right-wingers knew they were being watched, they mostly stuck to their regular chants, such as “Merkel has to go!”. They meant the democratically elected Chancellor of the Federal Republic of Germany, Angela Merkel. They also shouted “Lying press!”, as usual.

The Nazi rally included participants from the ‘Pegida’ organization, ‘Pro Chemnitz’, a known extremist group, the ‘Bruderschaft Deutschland’ (‘Brotherhood Germany’) and the white supremacist group ‘Soldiers of Odin’. The former AfD member André Poggenburg was at the protest as well. He used to be among the most radical individuals in the party, before he was kicked out.

Speakers at the rally of radicals said the falling rain was “washing the filth from the streets”. By that they meant left-wing counter protesters. And they vowed to “keep on fighting until we have our country back” from foreigners, including migrants. “For a white, Christian Europe of autonomous nations”, one of many signs read.

There were up to 1500 participants at the Nazi march, according to The Berlin Spectator’s estimate. Some 2000 counter protesters demonstrated against racism and xenophobia simultaneously. The police successfully kept the two protests apart.

Many Berliners left the city today. They wanted to make use of the two-week fall holiday for school children. Some of those who stayed met many tourists at ‘Friedrichstrasse’, a stretch of which was closed for traffic today. Some shops opened with a special permission. Usually, all shops in Germany close on Sundays, except some convenient stores. Restaurants and gas stations do open.

The Berlin Perspective: Messing Things Up in Fall