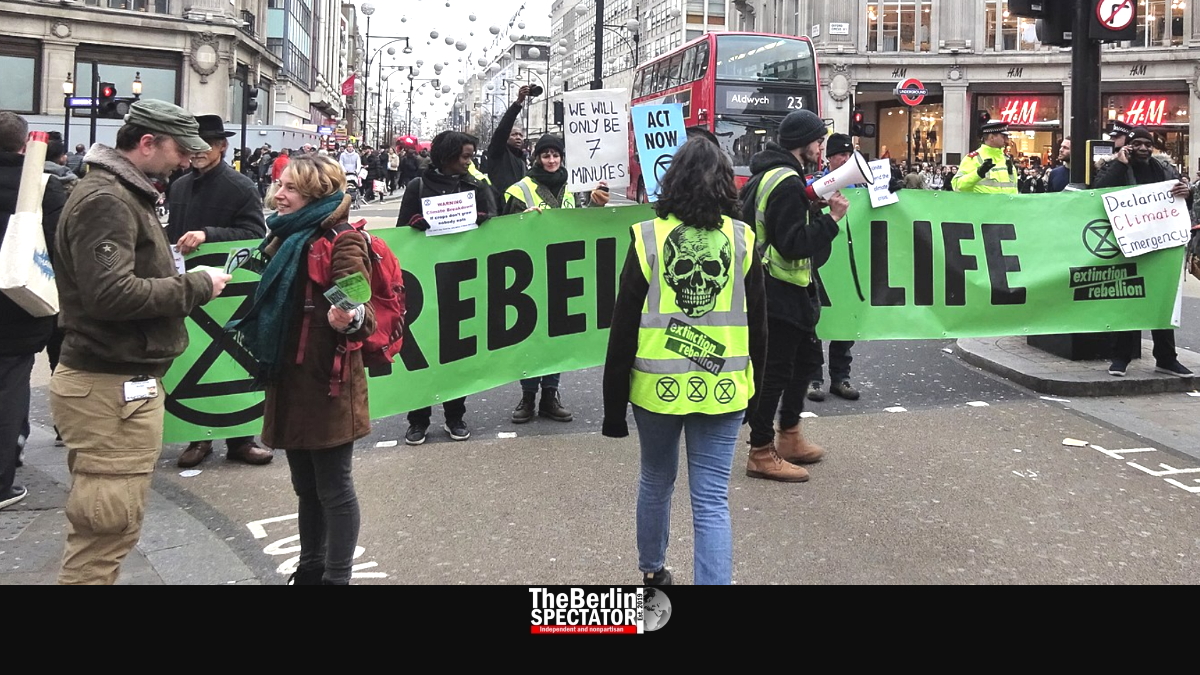 The Berlin division of Extinction Rebellion, a radical environmentalist organization, intends to “shut down” important intersections and other central spots in the German capital in the coming days. Berlin’s police department is prepared.

Extinction Rebellion (ER), an environmentalist group founded in the United Kingdom, intends to “shut” down intersections in Berlin, ‘Kurfürstendamm’, one of the main shopping miles in the city center, and even Marshall Bridge in ‘Mitte’ district. On the website uploaded by the activists it says the Berlin division had been “inspired by Extinction Rebellion in London”.

For Saturday, ER has announced a ‘Climate Camp’ in front of the Chancellery which is supposed to last until October 13th. At the camp, the environmentalists will demand a town hall meeting in which “necessary measures against the ecological catastrophe” are supposed to be “developed”. The ER group also announced “lectures and meetings” at the camp.

Extinction Rebellion has also announced several additional actions in the coming days. On Monday, October 7th, 2019, they intent to start an “uprising against extinction” in Berlin. They invited everyone to ‘Potsdamer Platz’ at noon, where they want to “hold workshops” and “live the vision of a car-free city”.

The group gave insight into part of its strategy for disruptions of traffic by announcing they would “swarm out” like bees when their “blockades” are evicted. Once it happens, they intend to start “decentralized” activities. ER told its supporters everyone needed to be part of a “group” within the movement. “Action maps” for disruptions are supposed to be given out. A boat, the “ark Rebella” is supposed to arrive in Berlin on Monday as well.

Apart from ‘Fridays for Future’, a huge movement started by Greta Thunberg, it looks like Berlin will now be confronted with disruptions by Extinction Rebellion. The organization says they will be “peaceful, but disobedient”.

Berlin’s police has chosen a pragmatic approach to ER’s announcements. Spokesman Martin Halweg told The Berlin Spectator, the police department would not announce details for any detailed plans it had. But the main task was to defend Germany’s Liberal Democratic Basic Order (‘Freiheitlich-demokratische Grundordnung’).

What? This is not the only article The Berlin Spectator has?
Well, no. Please check out the whole enchilada.
Our main page is a good starting point.

Blockades had been a known strategy for a while now, Halweg said. Within the police, there was guidance on how to deal with those. It was important to make sure freedom of expression and the right of free assembly were upheld. On the other hand there was freedom of movement too, the police spokesman stressed. “This is about weighing different kinds of basic rights.”

A week ago, Chancellor Angela Merkel’s government coalition had approved a ‘climate package’ with steps designed to make sure Germany reaches its climate goals. It was criticized by the Greens, Fridays for Future and other organizations as not going far enough. Germany intends to scrap coal energy by 2038 and nuclear energy as early as in 2022.