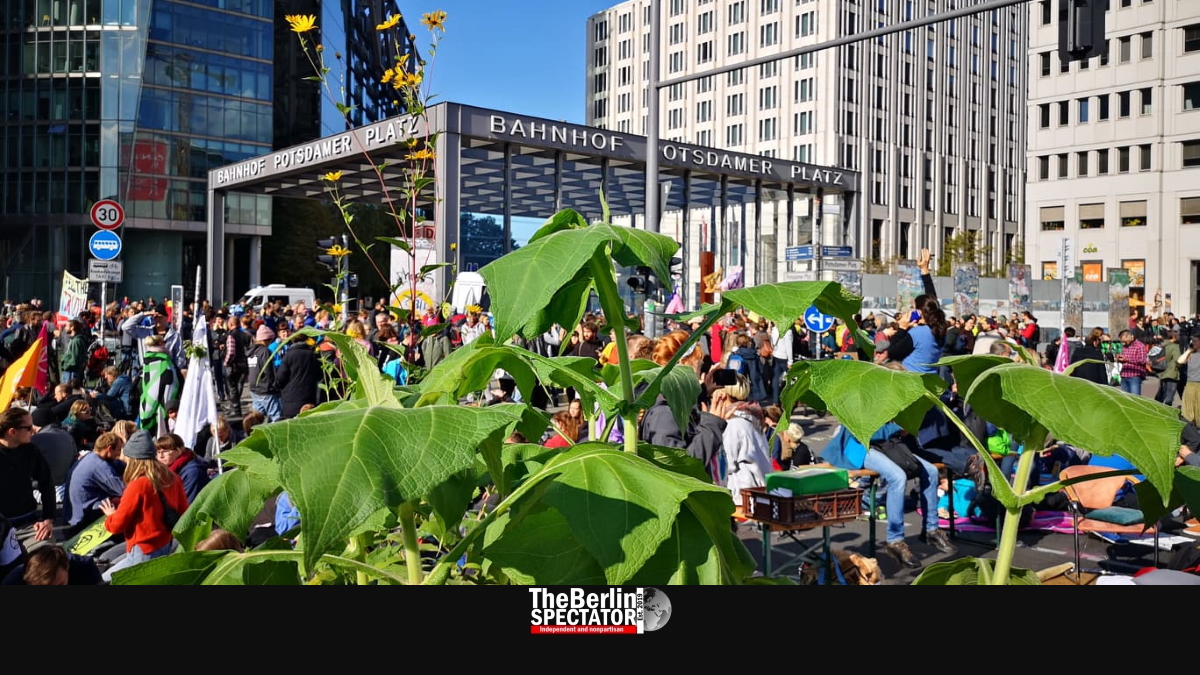 Update, October 10th, 2019, 8:30 a.m.: Protesters are still blocking the square at the Victory Column at ‘Tiergarten’. At Potsdamer Platz, police are trying to vacate a central intersection, but some participants of the demonstration are defying them since they chained themselves to heavy objects.

Update 8:05 p.m.: Police have started carrying protesters away from the big intersection at Potsdamer Platz, since they refused to leave, six hours after the protest they registered was supposed to be over.

On Monday, hundreds blocked two intersections in Berlin during protests organized by Extinction Rebellion. The movement is demanding bold steps for climate protection. In the late afternoon, police started clearing a main intersection at ‘Potsdamer Platz’.

The radical environmentalist organization Extinction Rebellion shut down traffic at two central spots in Berlin on Monday. At the Victory Column in the ‘Tiergarten’ district, no traffic could pass. The same applied to ‘Potsdamer Platz’, which is a rather important intersection in the city center of the German capital.

In the late morning, hundreds of Extinction Rebellion’s supporters showed up. They placed mattresses right on the street. Some participants pretended they were sleeping on them. Others brought big plants in flowerpots. Even bookshelves were set up right on the intersection.

While about 15 people were humming a down-pitched version of ‘A Horse With No Name’ by the band America, because they did not know the lyrics, some of Extinction Rebellion’s organizers arrived in a huge Diesel truck with a trailer, the kind of vehicle they say they do not want in the city. They unloaded furniture, a make-shift stage and more items.

At around 12:30 p.m., a police spokesman on site told The Berlin Spectator, the organizers had registered a protest on the intersection until 2:00 p.m.. Until that time, they would let them stay there. But at 4:00 p.m. the protesters were still blocking Potsdamer Platz. Until 5:30 p.m., the Berlin police department followed an unobtrusive strategy, probably in order to avoid provocations.

Before staging the prostest, some Extinction Rebellion supporters rehearsed the removal of blockades by police. The organization told participants to swarm out once police officers start vacating the blocked intersections and to meet at other spots to continue the protest there.

One of the movement’s members, Christoph, told The Berlin Spectator it felt good to finally start the protest after the preparation phase. On the other hand he was worried since it was unclear how the police would react and whether the activities would continue. Challenges needed to be met.

Christoph, who wanted to be called by his first name only, said if the police tried to remove the blockade, they would try to avoid being taken away. Extinction Rebellion was “disobedient”. He stated the pressure applied on the government by Fridays for Future and others was not enough, and Berlin’s climate policy not sufficient.

Berlin’s Senator of the Interior, Andreas Geisel, was quoted saying he would let the protesters block intersections spontaneously. This was covered by the law. At the same time he did not rule out the removal of blockades by police. For a while, Berlin would let Extinction Rebellion proceed, Geisel told the RBB in Berlin.

According to Geisel, the Berlin police will “act with good judgement”. At Potsdamer Platz and at the Victory Column, officers who are part of the police department’s communication team, kept in touch with the organizers as much as possible. A bit later, at 5:30 p.m., the police stared clearing the intersection at ‘Potsdamer Platz’ in order to open it for traffic again. Before, the protesters had been asked to leave voluntarily.

On Wednesday, Extinction Rebellion intends to block Marshall Bridge and ‘Kurfürstendamm’, one of the main shopping streets.