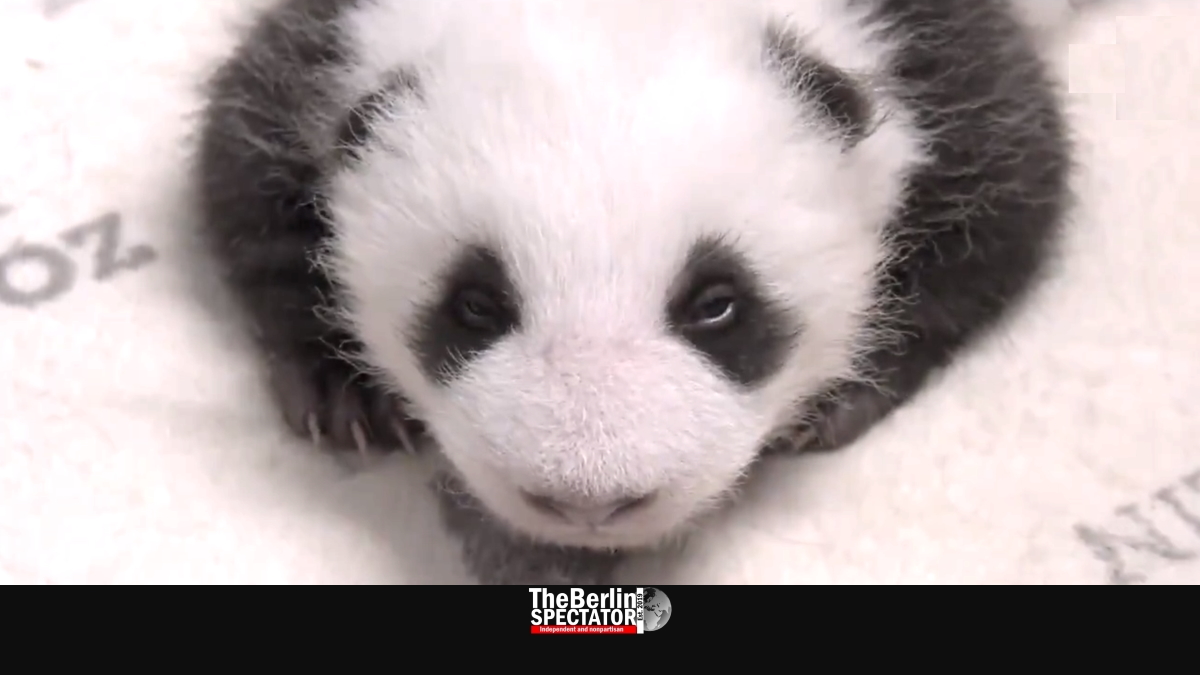 Our toys are made in China. The same applies to our sleek smart phones. As it turns out, our giant pandas at Zoo Berlin were also made in China, but not their offspring. Still, the baby pandas will move to the Middle Kingdom once they are bigger.

Since June 23rd, 2017, Zoo Berlin (read separate article ‘Zoo Berlin: Where Lions and Tigers are Not Being Fed’) has accommodated two giant pandas. They are Meng Meng, a female, and her boyfriend Jiao Qing. In April, the two copulated. The entire city talked about that event.

Behind the scenes, the whole thing was not as romantic as it may have seemed. Chinese experts were on site when it happened, but they could not be sure Meng Meng got pregnant. So they used a so-called ‘electric ejaculator’, in order to help nature a little. They wanted to increase the chances.

On September 25th, it actually happened: Meng Meng gave birth to two baby pandas. At first they were blind and so tiny that even experts could not even establish their gender. By now they have tripled their weight and they do look like pandas. Nobody will mistake them for anything else.

Meng Meng is looking after them conscientiously, but she has human support. Her Chinese and German keepers want to minimize the risk. So they are shielding her, meaning no zoo visitors will see them for now. Also they let Meng Meng be with one of her babies at a time, since giant pandas usually raise one baby only, even when they give birth to two.

The whole thing is sensational. It is the first time giant pandas were born in a German zoo, meaning this does not happen every day. On top of it all, Meng Meng seems to be a good mother. And they are all cute, all four of them. The number of giant pandas at Zoo Berlin just doubled.

But this is about more than just two cute pandas and their two babies living in a zoo. This is political. In 2015, Chancellor Angela Merkel started talking to the Chinese government about renting giant pandas for Zoo Berlin. In 2017, Meng Meng and Jiao Qing arrived.

Merkel and China’s President Xi Jinping inaugurated Zoo Berlin’s ‘Panda Garden’ back then, which cost 9 million Euro (9.8 million Dollars or 8.2 million Pounds Sterling) to build. For the pandas, the zoo pays 1 million Dollars (830,000 Pounds) per year. Whether this amount will double, now that there are four pandas, is unclear.

But one thing is: The pandas are property of the People’s Republic of China. And that is where the little ones will move once they do not need their mother anymore, meaning in two to four years from now. Yes, they already have their tickets to Beijing, so to speak.

In the past, the two zoos in Berlin had a total five giant pandas. The first one, a male named Happy, came to Nazi Germany in 1939, at a time when Jews and members of other minorities were not only banned from the zoo, but already murdered in death camps. Chi Chi lived in the ‘Tierpark’, which was the zoo in East Berlin, capital of the communist GDR at the time. Tjen Tjen, Bao Bao and Yan Yan lived in West Berlin and unified Berlin between 1980 and 2007.

Looking at those wonderful animals is nice. So is shooting pictures of them with Chinese-made smart phones. The story about the pandas and their babies just seems a little less romantic, considering the financial, scientific and political aspects. Critics even say the Chinese regime was trying to hide its brutality behind cute pandas.

Today, the zoo said the little pandas’ weight was already 2 kilos (four and a half pounds) each. They would soon walk around and be able to see better. Their development was excellent. Both of them are 30 centimeters (1 foot) long by now.

Regarding the names and the gender of the two panda babies, the world will have to wait until they are 100 days old. Zoo Berlin is following a Chinese tradition here. Maybe that approach is part of the expensive contract.

‘Zoo Berlin: Where Lions and Tigers are Not Being Fed’