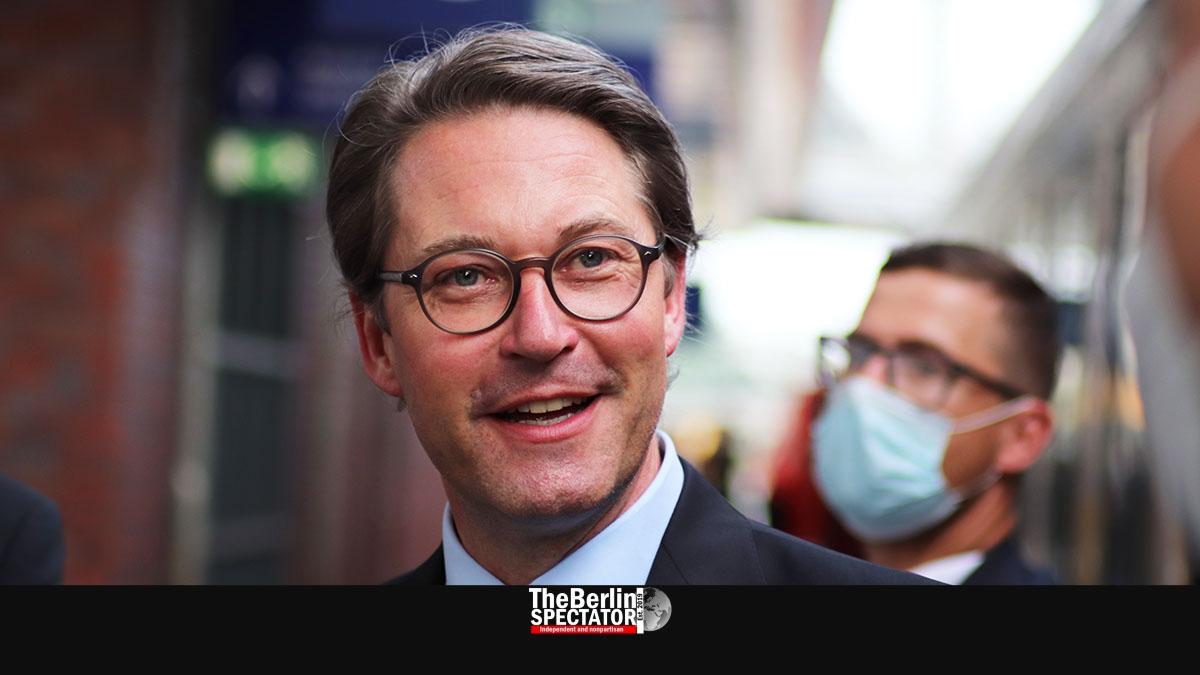 Andreas Scheuer, Germany’s Minister of Transport, is in trouble because of his failed Autobahn toll project. At the Berlin Bundestag, a board of inquiry is supposed to establish whether Scheuer lied about the endeavor.

In German, the word ‘toll’ stands for ‘great’, ‘awesome’ or ‘splendid’. But what Transport Minister Andreas Scheuer, a conservative from Bavaria, might have to expect is not great at all. In fact it could end his career in Berlin. One of the big questions the opposition parties want answered is whether Scheuer lied in parliament.

The toll project for passenger cars failed in June, when the European Court of Justice forbade it, saying it would have discriminated drivers from other countries. Austria, one of Germany’s nine neighboring countries, and one which does charge freeway tolls (British English: motorway tolls), had taken Berlin to court because of Scheuer’s endeavor.

Today, the fact that the entire story about the Autobahn toll is a mess is not being disputed anymore, not even in the CSU, Scheuer’s party. Everyone knows the failed project might cost the German taxpayer half a billion Euro (557 million Dollars or 429 million Pounds Sterling). The big question is why so much money was wasted and who is responsible.

In order to find out, the liberal party FDP did something it usually avoids: It teamed up with ‘The Left’ and the Greens on this matter to get the board of inquiry they wanted. Those three parties are angered because the Autobahn toll project caused a lot of trouble even before the European Court of Justice finally crushed it in spring.

Discrimination on the Autobahn

Minister Andreas Scheuer was happy to go back to Munich last week. At the CSU’s party convention he thought he was going to be cheered up after months of trouble in Berlin. But even some of his party colleagues back home slammed him for the way he handled the toll project before and after the court verdict.

In 2014, Scheuer’s predecessor, Alexander Dobrindt, introduced a concept for the Autobahn toll which he thought was brilliant. What he and his party friends really wanted was to charge foreign drivers in Germany. According to the original plan, Germans would have gotten their money back through a tax exempt amount in their motor vehicle tax.

This would have meant that Germans would not have paid more for using the Autobahn, but owners of cars registered in other countries would have. The European Court of Justice pointed at what it considered to be discrimination of owners of vehicles with foreign registrations. The court basically told Germany to either charge everyone or not to charge anyone.

When what some appropriately called the ‘foreigner toll’ was off the table after the verdict, Andreas Scheuer said his ministry had given a failure a 15 percent chance only. That is why he had gone ahead and signed contracts with companies. The latter were supposed to deal with the infrastructure needed, with the toll stickers and the website on which vignettes would have been sold.

While Scheuer says the situation had forced him to be prepared, the companies reportedly have a different recollection. It looks like they were ready to postpone the contracting until after the court verdict. Besides, the story about the 15 percent chance for a failure in court does not seem to be supported by the Ministry of Transport’s documentation.

Who lied and on what basis were expensive decisions taken in Scheuer’s ministry? These are the main questions the opposition wants to find answers to. The last chapter for the long story has not been written.

Merkel and the Toll

But the first one has: On September 1st, 2013, even before former Minister Dobrindt came up with those toll plans, Chancellor Angela Merkel was in a televised debate ahead of the elections for the Berlin Bundestag. The entire country heard her say this sentence: “There won’t be any toll for passenger cars as long as I am in charge.”

The toll lead to rather big arguments within the conservative camp, meaning between Merkel’s CDU and its Bavarian sister party CSU. At one point the Berlin government coalition almost exploded, in part because of the toll. Merkel agreed to it because she got a concession in return.

Scheuer is being accused of not having been transparent enough, of having taken decisions he should not have taken that early and of having bent the truth. But part of the blame for the toll fiasco might hit his predecessor and others within the CSU.