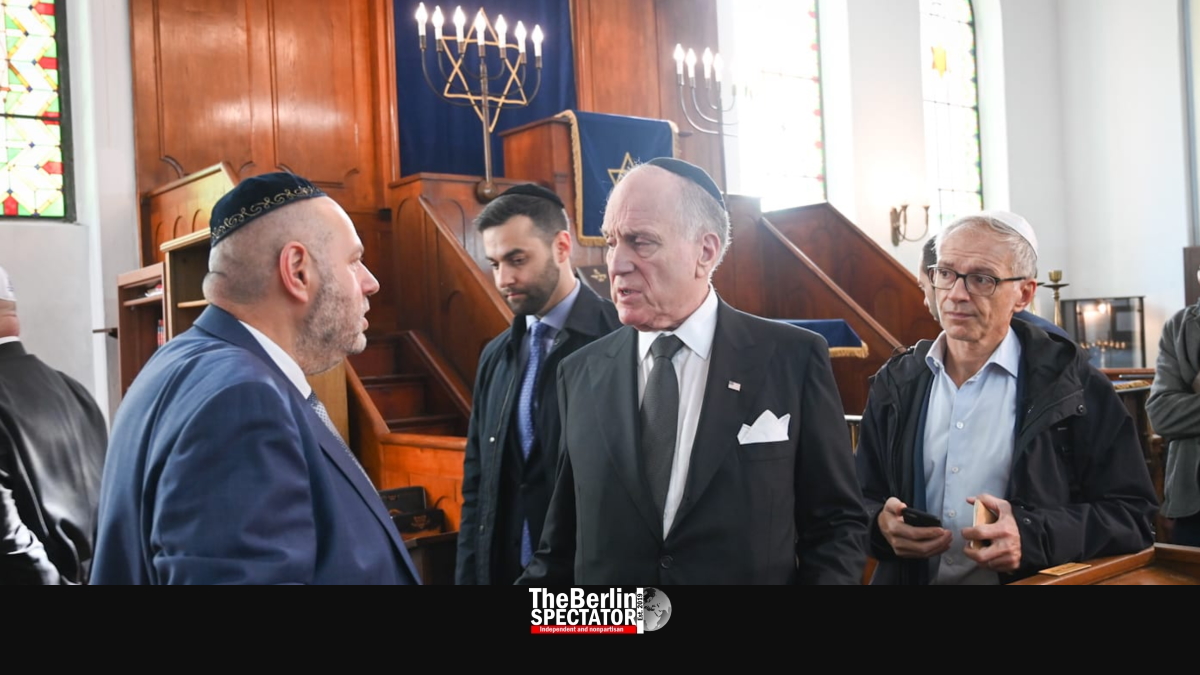 The President of the World Jewish Congress (WJC), Ronald S. Lauder, visited the Synagogue of Halle on Friday, two weeks after a Nazi tried to murder Jews who were observing Yom Kippur there. “We need action, not words”, Lauder said.

Ronald Lauder‘s visit took place two days after alarming results of a study conducted by the WJC in Germany were published. The outcome is that about a quarter of all Germans have antisemitic views. “Antisemitism in Germany has reached a disturbing high”, Lauder said.

The poll was done two months ago, meaning the participants were surveyed before the Halle attack, during which two passers-by were murdered. The attacker who had intended to kill “as many Jews as possible” did not manage to open the door to the synagogue, an aspect which saved many lives.

Almost half of all Germans surveyed, 48 percent of them, said Jews were more loyal towards Israel than towards Germany. Twelve percent said Jews were responsible for most wars in the world and 22 percent stated Jews were hated because of their behavior. Some of these conspiracy theories were spread by the original Nazis in the 1930s and 1940s.

‘We Need to Go After Nazi Groups’

At the same time, two thirds of the “elite” respondents said they would sign a petition against antisemitism. And two thirds of all Germans surveyed said they had perceived a rise of antisemitism and they believed it was connected to the recent successes of extremist right-wing parties.

“We need to go after those neo-Nazi groups”, Ronald Lauder told ZDF television during his visit to Halle. He said laws needed to be worded in a more stringent way. “Halle is a wake-up call for Germany”, Lauder stated.

The German government’s Coordinator Against Antisemitism, Felix Klein, reacted to the WJC’s study in an interview with the Funke Media Group on Friday. He said so far polls had come to the conclusion that 15 to 20 percent of all Germans had “latent antisemitic views”. Israel-related antisemitism was even more widespread.

Klein said the fact that the prosecution often closed court proceedings on antisemitic crimes was scandalous. The courts in Germany needed to penalize antisemitism more. Politicians of the Greens and the liberal party FDP in the Berlin Bundestag had reacted to the WJC’s poll results by saying they were shocked.

While the conspiracy theories about Jews controlling the economy and world politics are old, there are new ones too. The man who tried to murder Jews in Halle and actually killed two passers-by, mentioned some of those in front of his committing magistrate, according to the German-language ‘Spiegel’ magazine.

He reportedly said “the Jews” were behind the Federal Reserve in the U.S., they controlled the European Union and political parties such as the Greens and ‘The Left’. And he said the refugee movement in Europe was orchestrated by George Soros who wanted to turn Germany into a multi-cultural state.

In the meantime, the Minister Presidents (governors) of Germany’s sixteen federal states demanded a review of the penalties for antisemitic crimes in the law. After a meeting they had in the Bavarian castle of Elmau, they asked the German Conference of Interior Ministers to come up with a report on the situation in Germany by December 5th.

The governors also said the measures for the protection of synagogues and other Jewish facilities needed to be adjusted to the existing threat level. A resolute use of penal measures against antisemitism was inevitable.