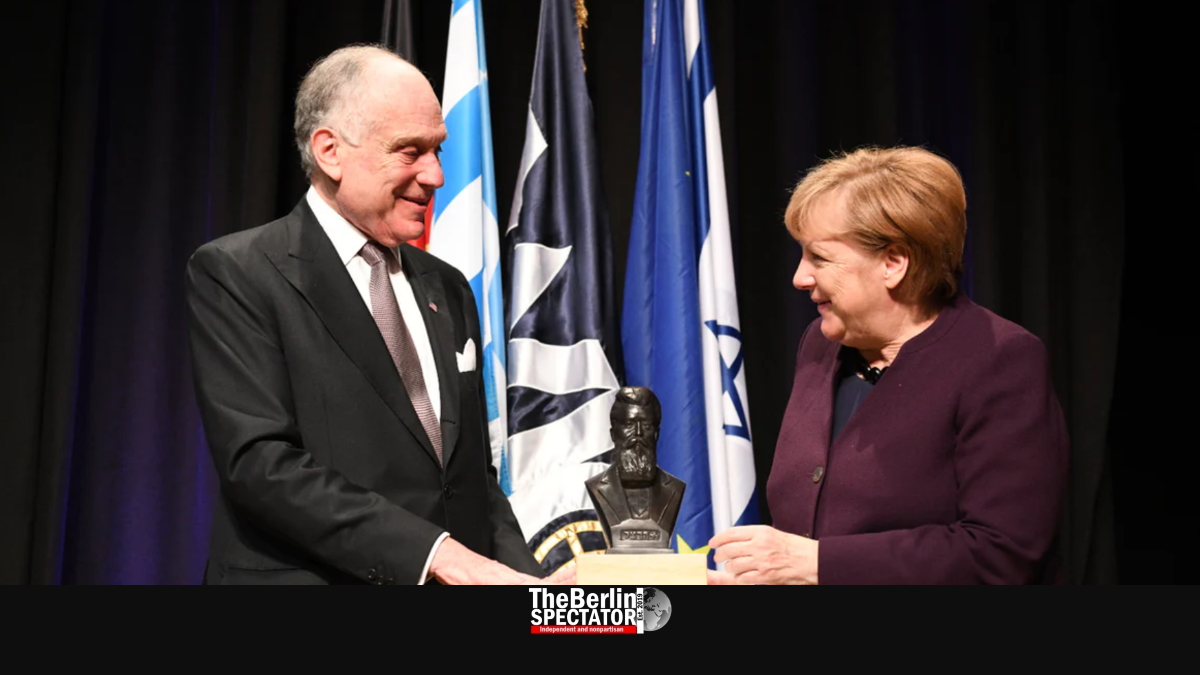 WJC President Ronald S. Lauder awarded Germany’s Chancellor Angela Merkel with the Theodor Herzl Award on Monday. He said she was “the symbol of all that is good in post-war Germany.”

The award ceremony the World Jewish Congress invited its guests to took place a day after extremist right-wingers got a lot of support in the state legislature elections of Thuringia, and less than three weeks after the Nazi attack of Halle, in which two passers-by were murdered.

Ronald Lauder said during the Munich event, Germany had made a lot of progress, rebuilt itself and “eradicated its dark past”. He called Angela Merkel “the icon of this incredible success” and said she was “the guardian of democracy, the guardian of civilization and the guardian of Europe”.

Lauder also expressed his concern about the situation in Germany today. “The ancient hate against the Jews is rearing its ugly head again all over Europe.” The problem of the rising antisemitism was not a Jewish problem, Lauder stressed. “It is a German one.”

‘They Attack Us All’

He asked everyone to stand united against antisemitism, racism, Islamophobia, xenophobia and homophobia. “We must fight the haters of every people and of all people. And it’s up to all of us to take action now.” Lauder demanded an improved police protection for Jewish facilities in Germany and said the German democracy had to defend itself, its citizens and its Jews “from the dark forces now rising” on both the extreme right and the extreme left.

Chancellor Angela Merkel thanked Ronald Lauder and said Jewish life in Germany had to be supported and protected. Regarding the Nazi attack of Halle, she spoke of “a heinous crime that fills us with utmost shame.” There were troubling developments directed “at Jews in our country, but not only them.”

“They attack us all”, Merkel told the guests at the ceremony. “Jews and non-Jews alike, everything that our country stands for, our values and our freedoms.” She warned that hatred was spreading on the streets and online.

About the prize she was awarded with, Merkel said she was humbled. “I regard this award that carries the name of Theodor Herzl as an obligation never to be content with what has been achieved, but to continue striving toward a better future in unison with our partners.”

Within the relatively small Jewish community, Merkel’s government has been criticized recently. This had to do with Berlin’s stance on Iran and the so-called ‘Iran Deal’, with the latest anti-BDS motion approved by the Bundestag, which the government has ignored until now, and with Germany’s anti-Israeli voting behavior at the United Nations.

Also the fact that Merkel’s government refrains from classifying Hezbollah as a terror organization angers quite a few Jews in Germany. But, all in all, most community members would probably agree that within the government, its head, Angela Merkel, is among those who are the strongest supporters of Israel.