How Safe and Comfortable is Berlin’s ‘U-Bahn’? 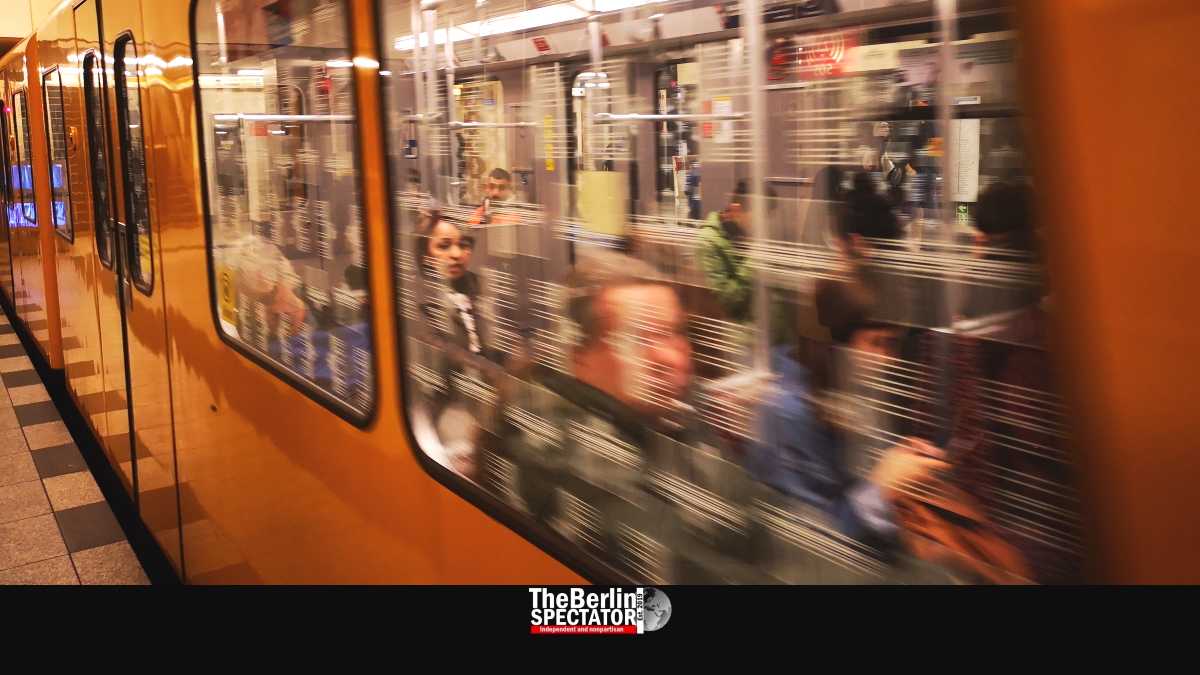 Riding underground trains which crawl through the ground like moles can be a good experience. Or it can be a pain in the neck, when we do so in certain parts of Berlin. Also the safety question just came up again.

Just like in other cities, Berliners and the German capital’s many visitors head towards the center of the Earth when they want to move from A to B, from B to C and back to A. They take the stairs into the dark underground. They go where the sun does not shine. It does not rain down there either. They head for the ‘U-Bahn’, Berlin’s metro, subway or underground.

Using the ‘U-Bahn’ at ‘Uhlandstrasse’ or elsewhere in the city center is usually a good experience. But there are stations like ‘Boddinstrasse’ or ‘Kottbusser Tor’ hardly anyone really likes to enter because of the smell in the staircases and the dozens of drunkards who keep on arguing. They molest passers-by and each other.

At ‘Boddinstrasse’ station, those who take early morning trains will be confronted with urine puddles on the platform and with smoking and drinking individuals, even though urinating, smoking and drinking are forbidden down there. Complaining to those who ignore all rules will most likely lead to potentially dangerous arguments.

Arriving there during the day or in the evening is not too good either. The other day, a man who seemed to be a drug addict begged people for money on the stairs. “C*nt!” is what he called those who refused. Down there, drunkards weave back and forth. They are a danger to themselves and to others, as the city knew even before a man was killed at ‘Kottbusser Tor’ on Tuesday night, after he was pushed onto the train tracks.

In Berlin’s ‘U-Bahn’ stations, dangerous incidents occur on a regular basis. In May of 2013, a young man was injured badly at ‘Gleisdreieck’ after he was pushed onto the train tracks. Two years later, another young man was attacked and pushed in front of a train at ‘Klosterstrasse’. His injuries were left-threatening. In 2016, a young lady was pushed onto the tracks at the ‘U-Bahn’ station ‘Ernst-Reuter-Platz’. She was killed on the spot.

Riding underground trains elsewhere can be a much better experience than doing so in Berlin. Hamburg’s ‘U-Bahn’ trains are a lot cleaner and more modern than those in Berlin. Most stations, maybe with the exception of ‘Reeperbahn’, do not smell as bad as quite a few stations in Berlin do. And they feel safer.

Sofia, the capital of Bulgaria, the poorest country in the European Union in which hardly anything works well, is extending its metro network. Before this year is over, the city’s third metro line will be inaugurated. And it will be one of the safest in the world.

Platform Doors Not an Option

First of all, Sofia’s metro stations do not stink. There is hardly any graffiti. There are usually no drunkards who would molest passengers. And the new metro stations have doors on their platforms. When trains come in, those doors open along with the metro’s doors. That way, nobody will ever be pushed onto the train tracks.

This kind of safety measure is effective and it does not cost too much. But Berlin’s main public transport provider BVG will not install a system of this kind anytime soon. Their ‘U-Bahn’ train fleet consists of many models with very different characteristics. To be precise: As many as 17 models are in service in Berlin. The intervals between the doors differ. This applies to both the regular trains and those with more narrow tracks on lines 1 and 3.

An entire fleet with one single train model would make that safety system an option. The BVG intends to purchase more than 1000 ‘U-Bahn’ wagons in order to replace the old ones. But those will consist of different models too, also because it will take many years, maybe even decades, until all of them have been ordered and delivered.

In Berlin, the only way is to watch it, to be vigilant in ‘U-Bahn’ and ‘S-Bahn’ stations, to avoid arguments with people in stations and to react to any incidents quickly. Every station has communication pillars at which passengers can talk to someone at BVG’s or Deutsche Bahn’s control rooms via a direct line by the push of a single button.

What comfort is concerned, riding the Hamburg ‘U-Bahn’, the Washington D.C. Metro or the metro in Sofia will probably always feel better. But the coin has a flip side: Those who ride those trains are not in Berlin, the fascinating city which attracts 13 million tourists per year and which we call home. Amen.