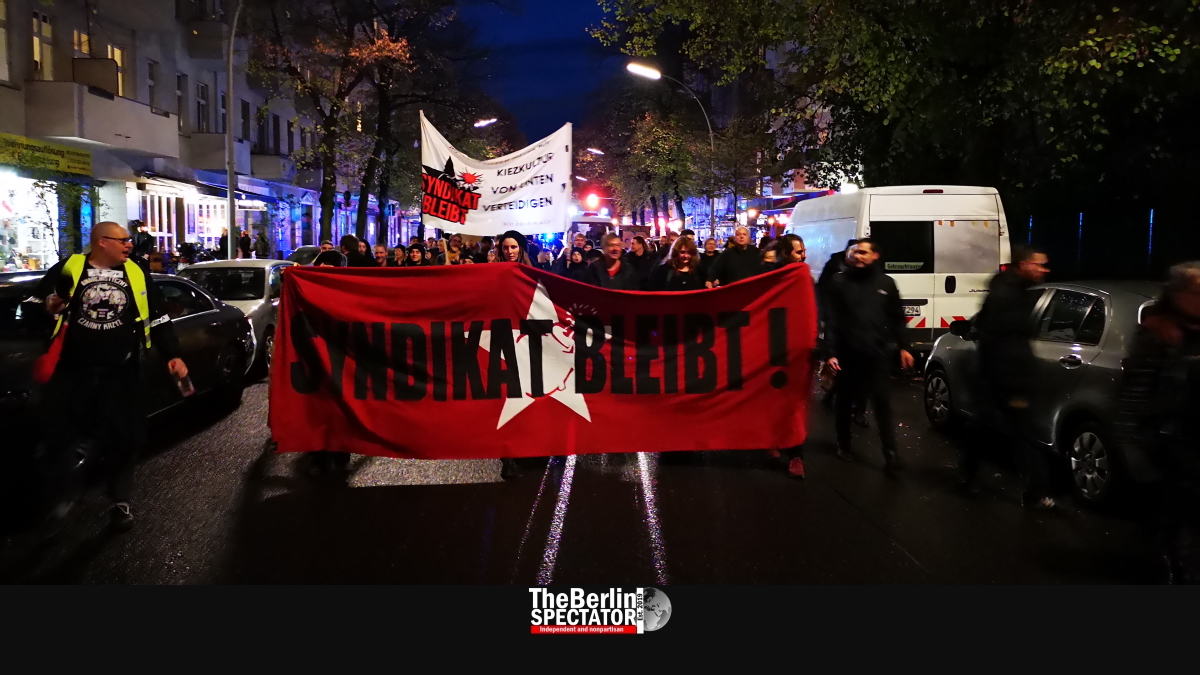 On Saturday, police were busy accompanying several demonstrations in Berlin. While Kurds, radical left-wingers and Bolivians protested, soccer fans made the day even more difficult.

In Berlin, thousands of police officers were on duty on Saturday, because of protests. Several hundred left-wing extremists roamed the streets in the Kreuzberg district in the evening. They wanted to avoid the closure of the ‘Syndikat’ pub, which is a popular meeting place for some left-wing groups.

Also the demonstrators were going to join members of the squatter scene in ‘Rigaer Strasse’. And they shouted anti-police slogans: “The entire world hates the police!”. While dozens of officers accompanied the protest, hundreds more were on standby in side streets, in order to be able to react to any escalations quickly.

A few kilometers further north-west, in the city center, even more police officers were guarding the headquarters of the Social Democratic party, when a demonstration organized by Kurds, against the Turkish military offensive in Syria, moved towards ‘Potsdamer Platz’ square. More left-wing groups and pro-Palestinian protesters joined them.

Once this demonstration reached ‘Potsdamer Platz’, they met about twenty Bolivians who protested against what they call election fraud in their home country. They told The Berlin Spectator they were opposing a fourth term for President Evo Morales and did not believe in his thin election victory.

While the Bolivians in the German capital are not causing any trouble at all, the authorities have registered increasing tensions between Kurdish activists and Turkish nationalists in Berlin. They are hoping the situation will not escalate further, also because German left-wing groups are trying to use the struggle of the Kurds to gain some ground.

As if all of those rallies were not more than enough to deal with on Saturday, police had to concentrate on soccer fans too, due to a match between the two Berlin clubs Union Berlin and Hertha BSC. Hooligans were among the crowds of fans.

Before the match commenced in a stadium in Treptow-Köpenick, hundreds of officers were busy keeping the fans of the two teams apart. Hertha BSC fans were not allowed to come close to Union Berlin fans and vice versa.

Berlin’s police department got support from other federal states and from the Federal Police on Saturday. Without that kind of help they would not have managed to do their regular police work, on top of it all.

An incident in the ‘Alt-Hohenschönhausen’ was reported today as well. Police were called to an abandoned building in which homeless individuals had lit a fire. One of the men reportedly took a knife and threatened several officers. A police woman shot and injured the man. An internal investigation commenced.