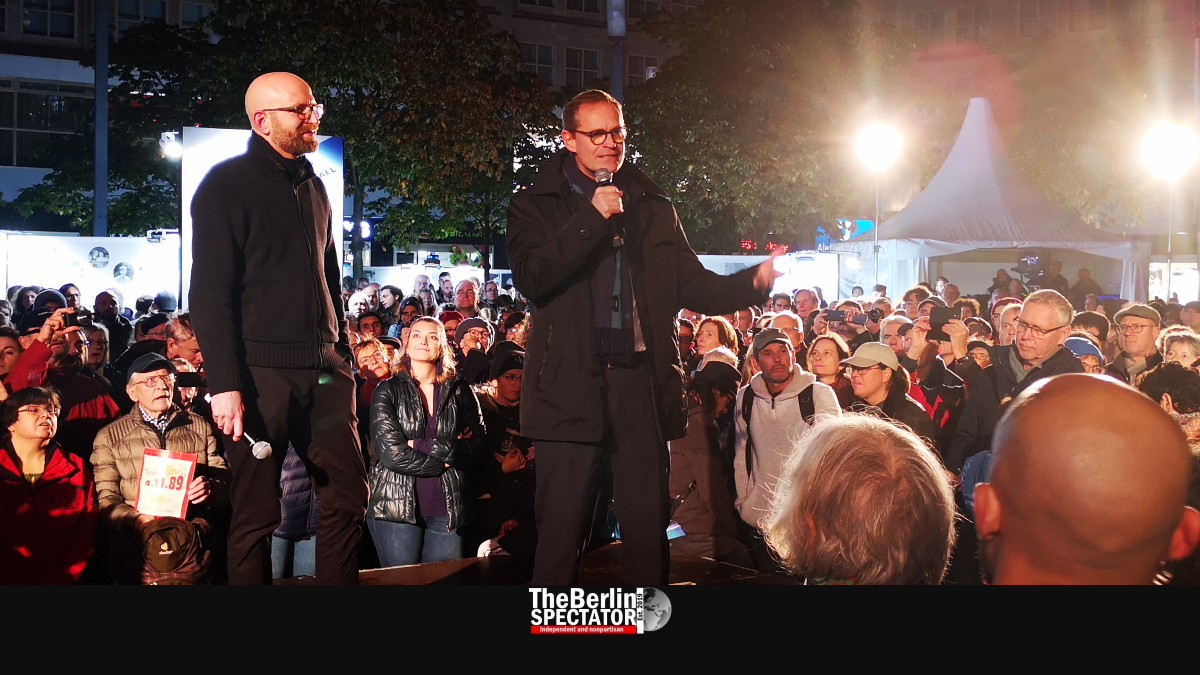 Berlin’s Governing Mayor Michael Müller opened the festivities for the 30th anniversary of the fall of the Berlin Wall at ‘Alexanderplatz’ square today. A large video projection on office buildings was shown.

Governing Mayor Müller hit a stage at ‘Alexanderplatz’ on Monday evening, exactly 30 years after hundreds of thousands of GDR citizens had protested for freedom and democracy at the same spot. Müller said he had wanted the events from back then to come alive again at their historic locations.

Back then something had happened for the first time, Müller stated. A people had found together after a peaceful revolution during which not a drop of blood had been spilled. The thirty years since had not always been a smooth path and not all aspects had been successful. But the main point was that people lived together now, without the Berlin Wall, in peace and freedom.

Governing Mayor Müller said it was important to continue to be committed to freedom, freedom of press, freedom of speech, freedom of religion and equality. On Saturday, November 9th, 2019, the actual 30th anniversary of the fall of the Berlin Wall, Müller and President Frank-Walter Steinmeier will hold speeches at Brandenburg Gate, which is one of the seven official sites of the anniversary festivities.

The video projection on buildings at ‘Alexanderplatz’ was not quite as impressive as it could have been, in part because the audio did not seem to cover the entire square. But the events leading up the the fall of the Wall and Germany’s reunification were seen. The footage included protests in East Berlin during which authors like the late Stefan Heym spoke to the masses.

Also Egon Krenz, the GDR’s last dictator, was projected on the walls of an office building, as he announced the phony results of the last so-called elections for the ‘Volkskammer’ in East Berlin. Protest banners were projected too, with slogans against the ‘Socialist Unity Party’ which ruled East Germany. Erich Honecker, the second-last dictator was seen pretending nothing had changed during the 40th anniversary of the GDR.

At ‘Alexanderplatz’, Berliners and visitors also looked at a small exhibition, listened to music and watched a street theater performance on a rainy evening, while Berlin’s typical sights, such as the TV tower, the World Clock, trams, trains and flashing emergency lights were seen in the background. Thirty years later, Berlin was not divided, but open and free.

Do you like this article? If yes: Would you consider supporting this publication?
Up to now, we have been working without income, for an entire year (as of September 23rd, 2019).
Your donation would make things easier for us. Thank you.
Please visit our donation page or go to our Paypal page directly.