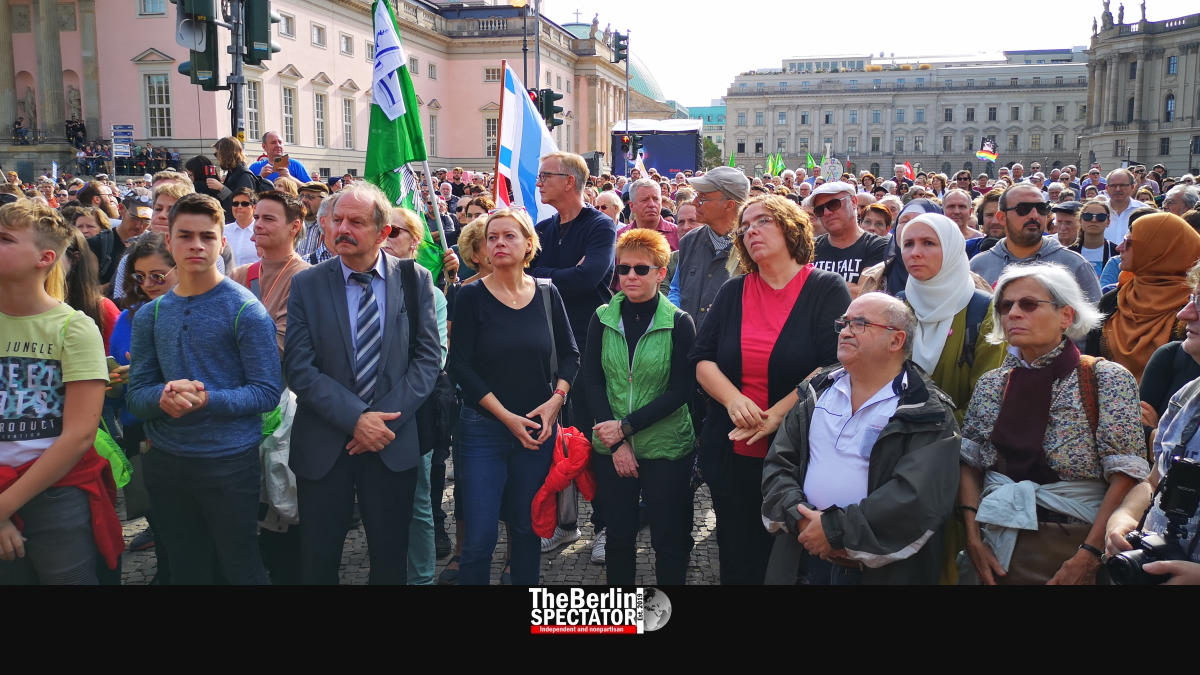 With around 5000 demonstrations per year, Berlin is definitely one of the world capitals of protests. Berliners will rally against many things. In some cases, protesters made history, in others they died.

On January 13th, 1920, Germany’s most tragic and bloody protest ever took place. While the Weimar National Assembly was in session at the Reichstag, some 100,000 demonstrated in front of the building. They opposed a new law which made employee representatives obligatory for larger companies. Police shot at the protesters. More than 40 of them were killed.

Another historic Berlin protest occurred over several days in late February and early March of 1942. During the ‘Rosenstrasse Demonstration’, non-Jewish Germans, mostly women who were married to Jewish men, demanded their spouses’ release. Earlier, 2000 Jews who were part of what the Nazis called ‘mixed marriages’, had been arrested. With a lot of courage, the participants defied Adolf Hitler’s regime.

On May 11th, 1952, seven years after Nazi Germany’s unconditional surrender, Berliners took to the streets in order to protest against the Federal Republic’s rearmament. One participant was shot by police. A year later, in June of 1953, the East German uprising against the communists in East Berlin was crushed by Soviet forces. Thirty-four protesters and several security officers were killed.

During the student revolution, on June 2nd, 1967, a rally against Mohammad Reza Pahlavi, the Shah of Persia, took place in West Berlin. A police man shot the student Benno Ohnesorg. This deadly incident increased the tensions in West Germany’s cities.

On the other side of the Berlin Wall, one of the most important Berlin protests ever happened. Thirty years ago, almost to the day, on November 4th, 1989, half a million GDR citizens demonstrated against their country’s communist regime. Only five days later, the Wall was opened.

Since then, Berliners have protested against hate, both Gulf Wars and nuclear power. After the Japanese reactors in Fukushima blew following the tsunami, tens of thousands of Berliners were on the street, demanding the shutdown of all nuclear power plants in Germany. It will happen in 2022.

Berliners keep on staging protests today. The Berlin police department told The Berlin Spectator, exactly 4696 had been registered from January 1st, 2019, until yesterday. This means the city might hit 5000 before this year ends. That would mean an average of 14 protests per day. Not all of them are big, but many are.

The police in the German capital is busy with countless demonstrations every year. On a regular basis, they need reinforcement from other federal states. Also they call the Federal Police. Since the 1960s and 1970s, the way German police deal with protesters has changed substantially.

Even in the early 1980s, demonstrators for peace or against NPPs were fought with water guns and clubs. Today, the police try to act as a deescalating party. Their strategy is to cooperate with the organizers. It is an approach which works well in many cases.

Depending on the protests and their participants, the Berlin police department sometimes has to protect the city and its residents from them. This was the case during the usual May 1st rally. As always, left-wing radicals among the participants wanted to use violence against the state, the same state which gives them the right to protest. The same applied to a Nazi march on German Unity Day: Again, police had to protect Berliners. Football hooligans are obviously hard to handle too.

BDS and their Islamist Friends

This is the case with other protesters who spread hatred as well, for instance against Jews. Police in the capital know exactly what to expect from the antisemitic BDS movement’s rallies or the annual ‘Al Quds’ march organized by people who have a lot in common with their BDS friends. Police know that the more hatred is being taken to the streets, the higher the danger of violence.

Earlier this year, Berlin imposed restrictions on antisemites. The BDS movement’s hero Rasmea Odeh, a convicted terrorist, was pressured to leave the Schengen states. She was banned from participating in any political events, including protests, and she would have been deported had she not left voluntarily, at the last moment.

But there are many more Berliners who oppose hate, including racism and antisemitism. On October 13th, after the deadly Nazi attack in Halle, thousands of Berliners took part in the ‘Unteilbar’ (‘Inseparable’) demonstration against all forms of hatred.

New Players on the Streets

Berlin was not the only city which noticed new players on the protest market in 2019, namely Fridays for Future and Extinction Rebellion. While a majority of Berliners support the likable students who demand a more persistent environmental policy from all governments, a majority was not too fond of those radicals who blocked part of the city for several days in a row. Greta Thunberg was welcomed in Berlin, Extinction Rebellion not so much.

On top of it all, many Berliners demonstrated for better pay or fewer working hours or both this year, including most employees of Berlin’s major public transport provider BVG. Also, hundreds of taxi drivers blocked Berlin streets a few times. They do not agree with policies which give Uber and comparable companies more rights.

Even expatriates staged protests, mostly against Brexit or leaders of Latin American countries. The Kurds just demanded an end to Turkey’s military operation in Syria. And Berliners of many origins protested for affordable housing and for the European Union more than once. In many cases, communist or other radical left-wing groups took part, in order to gain some ground. They scared away others who would not demonstrate next to communists.

One thing is a foregone conclusion: 2020 will be another year of protests. The alarming situation in parts of the world, the housing crisis in Berlin and climate change are only some of the subjects those rallies will be about.

Berlin Without the Wall