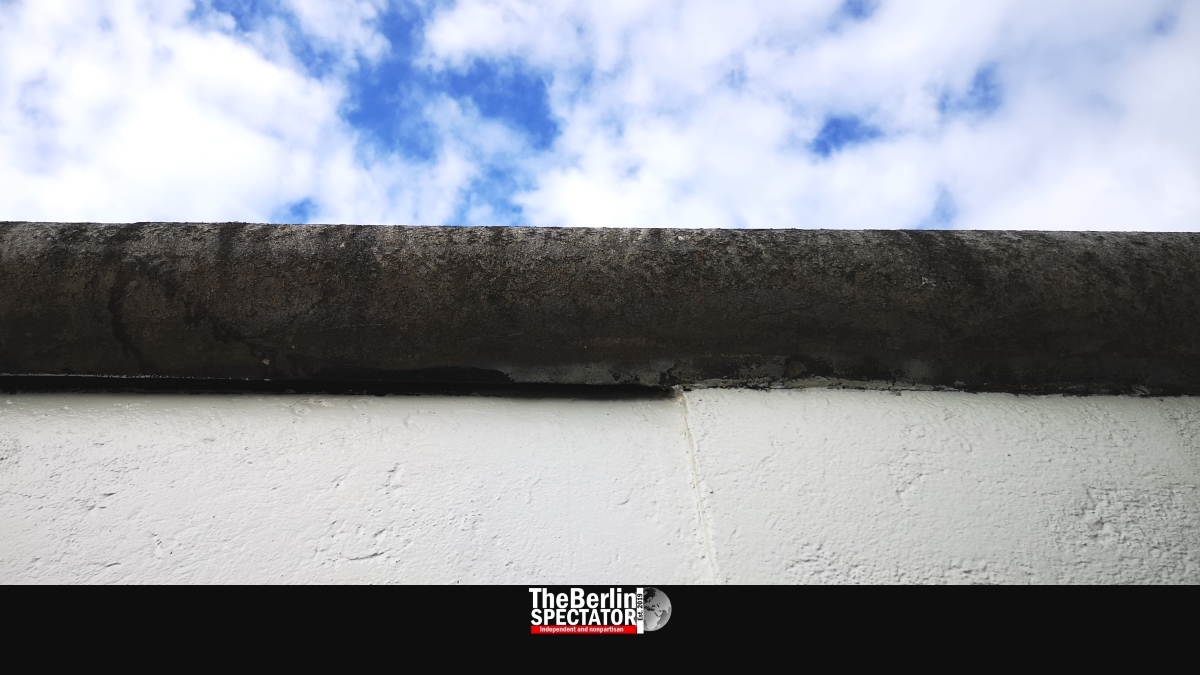 There are lots of important walls in the world, including the Chinese Wall, the wall Humpty Dumpty was sitting on, ‘The Wall’ album by Pink Floyd, released in 1979, and the wall President Trump has been talking about since the presidential campaign three years ago. Also there is the Berlin Wall.

Normally, walls are being built to keep people out. But in two cases, they were built to keep people in. This applies to jail walls and the Berlin Wall. Along with the fortification along the inner German border, the Wall made people stay in a country which spied on its citizens, which locked them up for expressing deviating opinions, and which murdered them for loving their country so much that they risked everything to get out of there.

‘We are the people!’

The Berlin Wall stood for 28 years and it fell 30 years ago, when a pressured ‘German Democratic Republic’ (GDR), which was actually ruled by a communist dictatorship, had to give in. By mistake, it ordered the opening of the Berlin Wall on November 9th, 1989. Just a month before, the GDR had celebrated its 40th anniversary, as if nothing had happened in the Soviet Union or in Leipzig, where protesters had started shouting “Wir sind das Volk!” (“We are the people!”) a week earlier.

Most of the Iron Curtain separated countries which belonged to the Warsaw Pact, dominated by Moscow, from those which were part of the Western world, the so-called NATO states. The part known as the Berlin Wall surrounded West Berlin, a Western enclave in the middle of Eastern Germany.

The Wall was very visible. People were murdered for trying to overcome it. Until 1989, the Berlin Wall symbolized the absence of freedom in the Soviet Bloc and all aspects of the Cold War, including the danger the tensions between East and West posed for people on both sides. Historically, it still does.

John Le Carré and many others based spy novels on events at or around the Wall. They did not have to use their fantasy that much because there were enough actual events and historic facts which were made for suspenseful novels. ‘The Spy Who Came in from the Cold’ was just as suspenseful as reality. But while Le Carré fans closed the book and put it in the shelf when they were done, the situation on the ground kept on existing.

The intraurban part of the Berlin Wall divided a city, boroughs, neighborhoods, buildings and people, including families. In most parts, there were two walls. One marked the actual border of the GDR, the other was supposed to keep GDR citizens from reaching it.

In Berlin, the remaining parts of the Wall, e.g. at the West Side Gallery, are memorials today. Metal plates with inscriptions mark the former location of the Wall all over the city. At museums, including the German History Museum, the Wall Museum and the GDR Museum, Berliners and tourists can learn about, or be reminded of, all aspects connected to what the GDR regime called the “anti-fascist barrier” (“Antifaschistischer Schutzwall”).

Every day, thousands of tourists listen to guides talk about the Wall, they take millions of photos at Checkpoint Charlie and other sightseeing spots directly related to the Wall, but only some take the big trip along the ‘Mauerweg‘ or ‘Wall Path’. The latter surrounds what used to be West Berlin exactly the way the Berlin Wall did. By bicycle, those 160 kilometers (100 miles) can be covered in two days.

“Nobody has the intention of building a wall.” This is what the GDR’s dictator Walter Ulbricht said just before it was built. Ronald Reagan told Mihail Gorbachev to “tear down this wall” two decades later. Only months before the Berlin Wall fell in 1989, dictator Erich Honecker told GDR citizens that “the Wall will be standing in 50 and even in 100 years from now”. He misestimated things slightly.