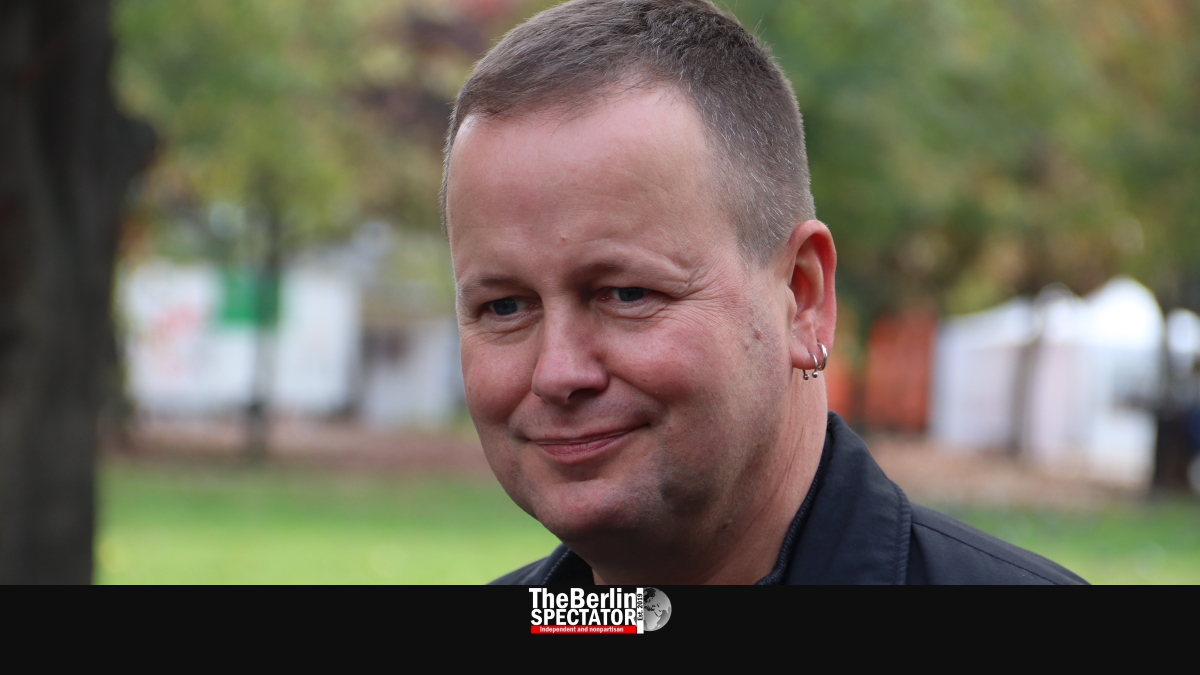 The conflict triggered by anti-Israel statements displayed on stage at the 30th anniversary of the fall of the Berlin Wall celebration on Saturday is continuing. While Berlin’s Culture Senator Klaus Lederer has apologized, the conservative opposition wants to discuss the matter at the House of Representatives.

During the fall of the Wall anniversary, tens of thousands experienced the big celebration at Brandenburg Gate on site. Many more watched it on ZDF television, which broadcast the big event live. Mainly Israeli spectators, German Jews and the very few others who speak Hebrew understood the political messages in Hebrew which were displayed on a big balloon on stage during a musical performance.

Directed at those who Understood

They said “End the occupation” and “Land without walls”. These messages were obviously directed at those who understood them, and they were shown on the anniversary of the Night of Broken Glass, which coincided with that of the fall of the Berlin Wall. On November 9th, 1938, the Nazis, including many civilians, murdered 400 Jews, burned synagogues in all of Germany and destroyed countless Jewish-owned businesses. That night was the beginning of the Nazis’ mass murder of Jews in Germany and all over Europe.

The Hebrew messages displayed during the celebrations are problematic in several ways:

The Israeli Ambassador to Germany, Jeremy Issacharoff, said it was a disgrace that some people had thought it had been fitting to abuse that event for political messages directed against Israel. The conservative party CDU in the city state of Berlin now wants to discuss the matter in the House of Representatives.

Berlin’s Culture Senator Klaus Lederer from the party ‘The Left’ was responsible for the festivities. He said he deeply regretted that an anti-Israeli message had been displayed during the 30th anniversary of the fall of the Berlin Wall celebration. Lederer commissioned the company ‘Kulturprojekte Berlin’ to organize the cultural part.

After the German blog ‘Ruhrbarone’ broke the story on Sunday, The Berlin Spectator officially asked ‘Kulturprojekte’ who had been responsible for those political messages. While other media received answers to their inquiries on Sunday, this one received an e-mail on Monday afternoon. It referred to a post on the company’s Facebook page.

That post said a “mistakable” image had been included in an “artistic video sequence about peaceful protests”. The latter had shown protests of the organization ‘Women in Black’ which had been awarded with numerous peace prizes. The fact that some groups involved support the anti-Israeli BDS movement was not mentioned.

But ‘Kulturprojekte’, a state-owned company, did say that the organizers of the Berlin celebration did not share that opinion. The company apologized for any “misunderstandable interpretation”, even though others were the ones who “interpreted” the anti-Israeli statements, and in spite of the fact that the interpretation was not misunderstandable at all.

In the meantime, the ZDF TV network has removed the anti-Israeli statements from the video footage of the fall of the Wall anniversary celebrations, which can still be watched on the channel’s website.