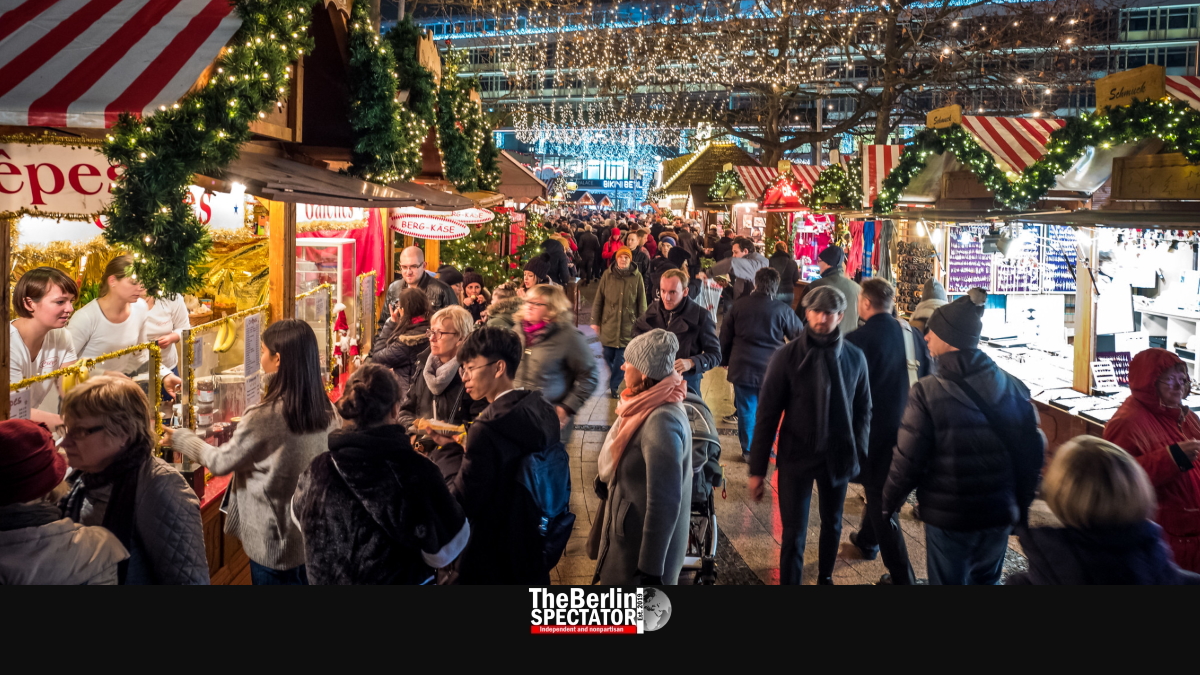 On November 25th, 2019, most of Berlin’s Christmas markets will open all over the city. Some are more commercial, others traditional. One of them, the LGBTIQ Christmas market, might be the most modern one.

Christmas is for Christians, but German Christmas markets are for everyone. These traditional events are so nice and cozy they have even been exported abroad. There is one in Sofia, one in Birmingham and one in Mountain View (California), where they call it ‘German Holiday Market’. These markets are obviously everywhere, including in Berlin.

Tipsy at the Christmas Market

There are many ingredients German Christmas markets should have. ‘Glühwein’, that hot wine punch the Germans love so much, is one of them, along with its smell. Getting a little tipsy is easy for those who consume it. Another advantage is that it keeps people warm.

‘Schmalzkuchen’, tiny cakes fried in oil and covered with powdered sugar, are another item every real Christmas market needs. Roasted almonds are usually being sold too. So are all kinds of nuts, sweets and cookies. What the latter are concerned, there are Christmas cookies Germans usually bake at home, with sweet dough children love to taste before it is being baked.

And there are ‘Speculaas’ or ‘Speculoos’. They are spiced shortcrust biscuits which do have a very distinct smell and taste. Some of those need to be on any Christmas table, and they are for sale at any real Christmas market in Germany or its neighboring countries. Many of those markets also offer melted cheese dishes, sausages and Bratwurst.

Christmas presents, including toys made out of wood and candles, are being sold in those typical little wooden huts as well. And decoration for Christmas trees, including Christmas glitter balls in all colors of the rainbow. Some resemble miniature Disco balls. Some Christmas markets offer carousels or even giant slides and ice rinks.

Music is another important item. On most German Christmas markets, children and adult choirs sing Christmas carols. And they play the most important American and British Christmas tunes, including ‘White Christmas’ by Bing Crosby or ‘Driving Home for Christmas’ by Chris Rea. Unfortunately they sometimes play terrible German ‘Schlager’ songs too while bypassing the most beautiful Christmas song ever: ‘This Christmas‘. There are versions by Donnie Hathaway, Aretha Franklin and others. But we are getting carried away here.

On top of it all, any of those markets needs a big Christmas tree and millions of lights in many colors. There is one more thing Christmas markets should have, but they can only promise it if they are located in Alaska, Greenland or Norway: It’s a white powder known as snow. Do not mix it up with powdered sugar.

Some of the nicest Christmas markets in Germany can be found in Nuremberg, Dresden, Bremen and other cities and towns which offer medieval, historic environments. But some less beautiful cities also offer Middle Ages-themed markets. Generally speaking, the more traditional markets are usually nicer than the very commercial ones.

These are Berlin’s Main Christmas markets:

This is one of the larger Christmas markets in Berlin. It will take place for the 36th time from November 25th. More than 200 little wooden stalls will offer it all. This market is usually very crowded. Tourists and Berliners love it.

Christmas Market Terror Attack (2016)
On December 19th of 2016, the Islamist Anis Amri murdered 11 eleven people and injured 55 by running them over with a huge truck he had stolen, at the Kaiser Wilhelm Memorial Church Christmas Market. Since the deadly terror attack, Berlin has made ‘Breitscheidplatz’ square more secure by adding anti-terror pollards. Police will be guarding all Christmas markets.

This one is located in the center of the universe, right at ‘Alexanderplatz’ square. With 100 wooden stalls, it is one of the bigger ones, but probably not the most beautiful one in Berlin. It usually features an ‘Erz Mountain Pyramid’ with thousands of lights. Those who want to see it from above can enter the restaurant at the neighboring ‘Kaufhof’ department store.

At one of the most important Christmas markets in Berlin, right at ‘Gendarmenmarkt’ square, visitors can watch handicraft professionals make their products. This event in the unbeatable atmosphere of one of the nicest squares in the city is special. It commences on November 25th.

This event is not an official Christmas market, but it does offer some typical stalls and therefore looks like one, in part. But the main thing here is a fascinating light show. ‘Christmas Garden’ is already taking place on a daily basis, starting at sundown, at Berlin’s Botanical Garden in the posh Dahlem district.

Apart from the stalls, Christmas Garden offers 32 light attractions all over the garden’s premises and nice, appropriate music coming out of dozens of loudspeakers. Nobody really wants to see the Botanical Garden’s electricity bill. But admission costs real money too: Tickets for adults are 17 Euro from Mondays to Thursdays and 19 Euro on Fridays and weekend days. Children pay 14.50 to 16.50 Euro. The tickets do not include food or drinks. There are family tickets as well.

From November 25th, one of the more beautiful Berlin Christmas markets is scheduled to open at ‘Schlosspark’ in Charlottenberg. The atmosphere at this one is stunning. Visiting it should be a majestic experience. Austrian food is being offered at a ‘winter open air restaurant’. The park will be lit by countless colorful lights.

Just a few steps from Red City Hall, around Neptune Fountain, yet another great Christmas market will open on November 25th. One of the attractions here is a giant wheel people can look at the city from. It is 50 meters high. The same giant wheel is part of the Munich Oktoberfest every year. Food is being offered at countless little stalls set up like a miniature city.

From November 25th until December 28th, 2019, the entire pedestrian zone in ‘Wilmersdorfer Strasse’ will be converted into a big Christmas market. They give out little presents at 5 p.m. every evening and they employ a Santa Claus people can shoot selfies with. There won’t be any food shortage at this market either.

This is another interesting Christmas market. It takes place from November 25th to December 22nd at the ‘Kulturbrauerei’ venue at ‘Schönhauser Allee 36’. Also since it is being set up in the old yards of a former brewery, the atmosphere should be very special. The ‘Lucia’ event is a Scandinavian Christmas market, meaning it follows northern traditions. More than 60 stalls and lots of photo ops can be found here.

This event at Ferdinand Friedensburg Square in Berlin’s Spandau district is actually more of a fair than a Christmas market. Carousels and many other attractions, plus the Rock and Rap music heard everywhere, will mainly attract youngsters and young adults who might be interested in action more than in Christmas carols. This event takes place from November 22nd until January 6th. But it will not open on November 24th or December 24th.

Just a few blocks away, in the Old Town of Berlin’s Spandau district, one of the largest Christmas markets will be set up. During the week, some 250 stalls will be part of this one. On the Advent weekends, there will even be 400 stalls. It might happen “on the other side of the city”, depending on the perspective, but this one is worth a visit too.

There are a few Berlin Christmas markets which stick out. One of them is ‘Christmas Avenue’, an event for members of the lesbian and gay community as well as its supporters, friends and anyone else. It takes place at ‘Nollendorfplatz’ square. While ‘Christmas Avenue’ opens on November 25th, the event is actually open already, except they call it ‘Winterdays’ until November 23rd.

Andreas Boehlke designed a special light concept for ‘Christmas Avenue’ which contributes to a unique atmosphere. There is a stage with daily shows. And they offer high quality hot wine punch (‘Glühwein’) and great food.

The Medieval Christmas Market at the RAW

This event is one of the many Berlin Christmas markets which are ‘must sees’. Here, blacksmiths, potters and wood carvers can be watched at work. Great food and arts and crafts are being offered at this former yard office which was used for repairing and building train tracks decades ago. The entrance to the premises can be found at the intersection of ‘Revaler Strasse’ and ‘Dirschauer Strasse’ in Berlin’s Friedrichshain district. Note: While most other Christmas markets open on November 25th, this one commences on the 21st.

This one offers a lot of action, including carousels and similar attractions, and more food than anyone could consume. Located at ‘Landsberger Allee’ 364, this one is for visitors who want action rather than quietude.